Cinderella the Movie: Why Do We Hate Ourselves?

I recently blogged about three things a romance writer can learned from the 2015 Cinderella Movie. That covered some ground but not all. With Maleficent heralded as a feminist triumph, and Frozen welcomed as move away from Waiting-For-The-Prince-To-Save-Me to focusing on family bonds and the power of love, it was interesting that Disney chose to make a super faithful live action version of the 1950 Cinderella movie.

The 1950s aren't precisely known as an era for female empowerment. The prevailing rhetoric had women firmly back in the kitchen preparing highballs for their menfolk and ensuring they had their lipstick straight for the moment he got back from work. Cinderella challenged that... not at all. No, she merrily swept out the house without resentment and as a reward got treated to a night out and met a monied fella who swept her off her feet without so much as a Bibbity Bobbitty Boo to a woman's traditional reward: marriage.

Roll on 65 years - have things changed?

Well er, no. Not especially. This movie is very faithful to the cartoon. I already mentioned the mouse thing, but the thing which really bothered me - and which came through even more strongly than in the 1950 version - was Cinderella's lack of self worth.

Here's the way it goes.

Cinderella has a golden childhood dancing with her doting dad and being told to believe in EVERYTHING by her golden mum. Then her mum tucks her into bed, breaks out in a sweat and promptly keels over (check out Disney's mummy mortuary and why you should care about it). 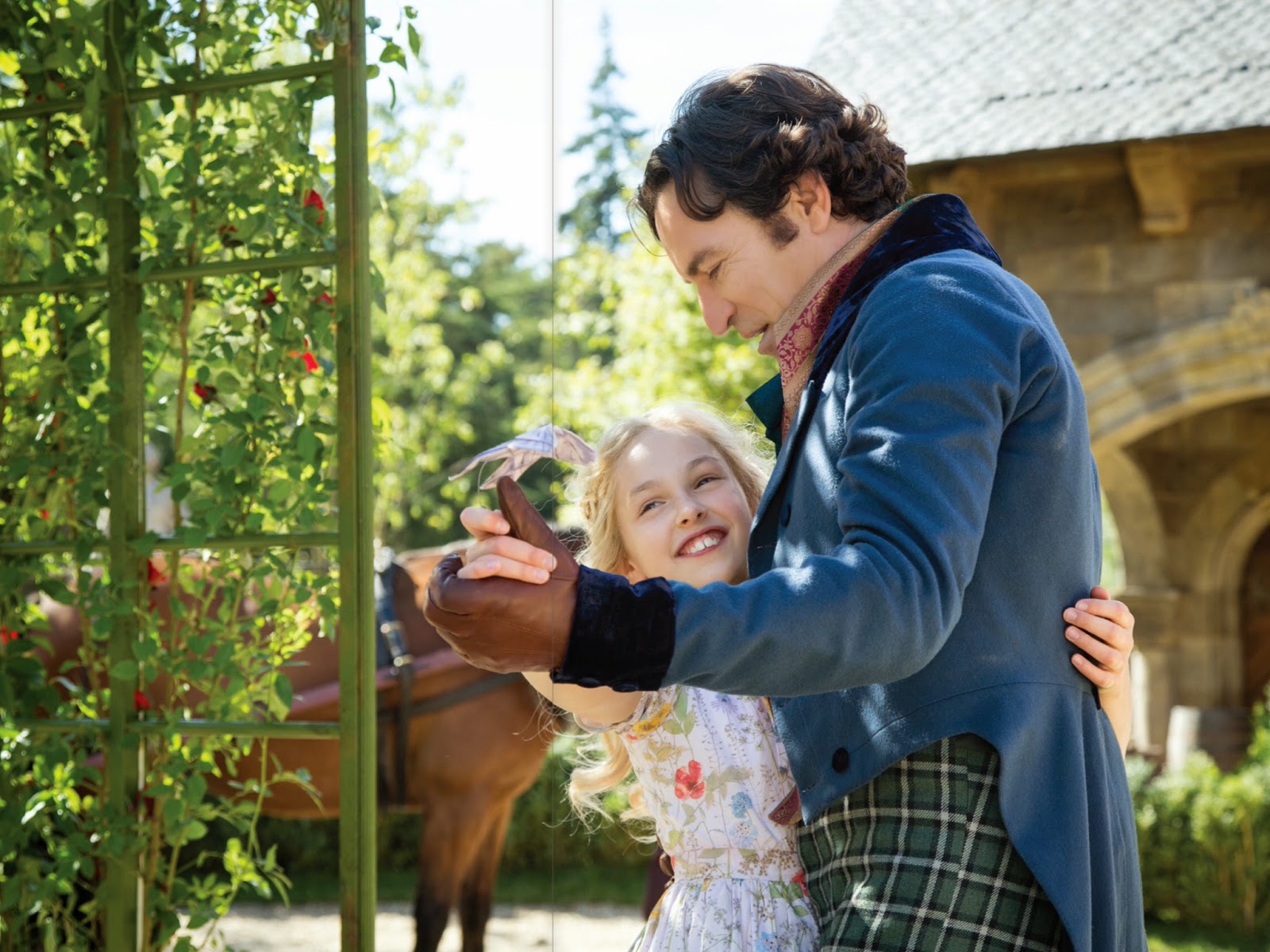 Side note: my seven year old immediately wanted to know what she'd died of. Turns out that was the first thing my 49 year old big sister wanted to know too. Was it plague she asked? Fast growing tumour, I thought. Anyways, back to the blog...

Now for the death bed scene. Cinders' mum asks Cinders to make an important promise: to always Be Kind and Have Courage.

A few more years of gaily dancing around the house and then Cinders' Dad remarries. It's 0 to 60 here with the nastiness. Cinder's wicked stepmother barely pretends to be anything other than a b*tch and her stepsisters are openly nasty. Odd for doting dad to overlook this but never mind. Cinders is prepared to turn the other cheek.

And thus it begins. By the time Daddy Dearest follows mum up to heaven, Cinders is already living in the attic surrounded by mice. One wonders how  the Wicked "You can call me Madam" Stepmother plans to justify this to Dad when he gets home, but as he conveniently dies this isn't a problem.

And besides, Cinders is busy Being Kind and Having Courage.

Here's what really stuck in my throat about Cinderella the movie. As far as female role models go it's WORSE than the 1950s cinematic version. At least in the cinematic version Cinders has a bit about her. She's pretty proactive with her singing mouse army. Come 2015 she's limp as week old lettuce. 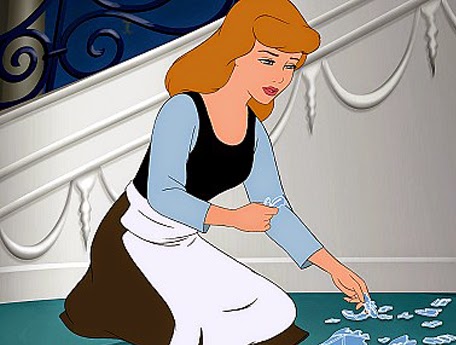 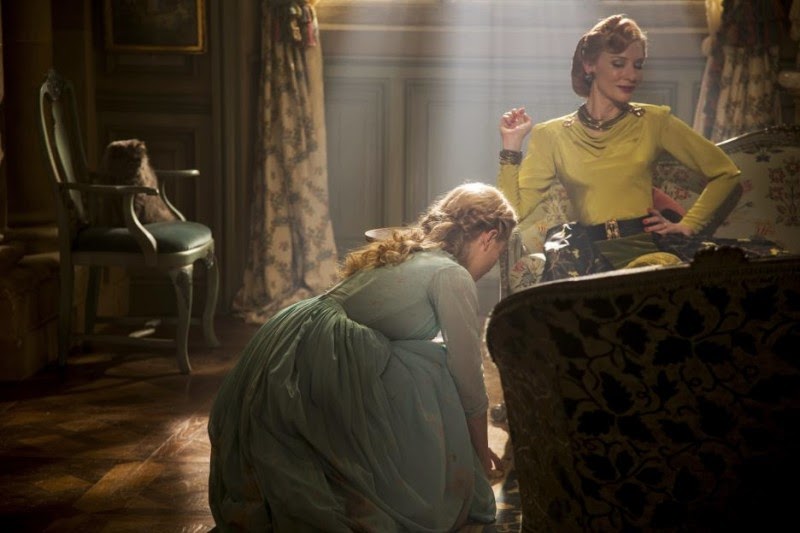 Her interpretation of "Be Kind and Have Courage" is to put up with any amount of crap, bullying and misery and not to complain about it, challenge it or to act in her own defence in any way at all. Whilst cartoon Cinders seemed to enjoy dancing about with a feather duster, live action Cinders doesn't. "You don't look well," her old maidservant advises her, asking why she doesn't leave. It's a fair question. Cinders response is that her folks loved the old house and so she has to keep the garden nice or something. Er, okay. I'm sure that those totally doting parents would be thrilled that their house was weed-free and well dusted and that their daughter was enduring living slavery. Or not?

In fact, the only slight feistiness modern Cinders demonstrates is in the forest when asks the Prince not to kill the stag. He protests, claiming it's the done thing. Cinders points out that just because it's the done thing, doesn't mean it's right. All he needs to do, explains Cinders, is to Be Kind and Have Courage.

Because for a man being Kind and Having Courage means something totally different than for a woman. On the Prince's variation of the parental death scene his father asks him if he'll marry the Princess Chehina if the King orders him too, the Prince says no. He reckons he needs to follow his own instincts and that he's got what it takes to rule a Kingdom without Princess Chehina's additional resources. All he needs to do is to "Be Kind and Have Courage" he explains. The King is delighted. "You're your own man," he congratulations his son. 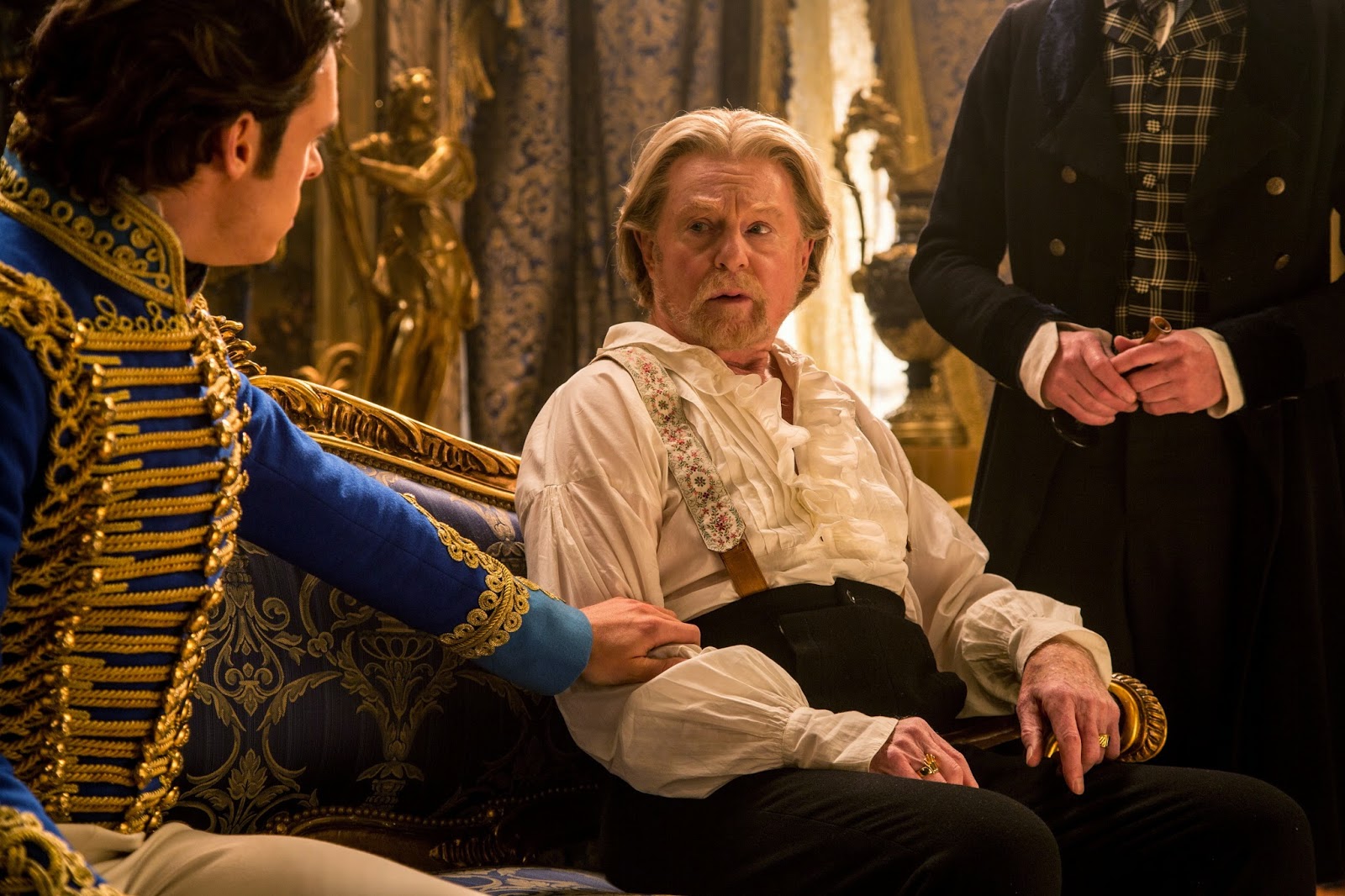 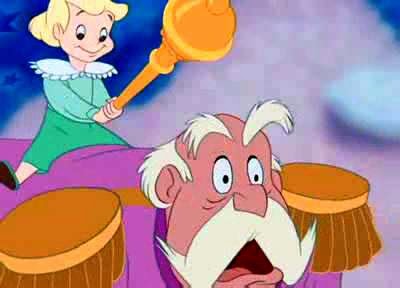 So for the Prince, Being Kind and Having Courage doesn't mean masochistically enduring an unendurable situation (being married to someone he doesn't love when he has met the girl of his dreams). His kindness extends to himself, as well as to the people around us. His courage means the courage of his convictions.

But for Cinders, Being Kind and Having Courage DOES mean masochistically enduring an unendurable situation (living in slavery). Her kindness doesn't extend to herself. Her courage is used only to... wait, when does she display courage? Sent to the attic, she doesn't protest. Denied the ball, she doesn't rebel and make an attempt to go out until the Fairy Godmother tells her to, clothes her AND gives her magical anonymity, thus making it risk-free. Imprisoned, she doesn't once try to escape. Even when the Prince's men visit, it's the bloody mice who open the window.

Her big act of courage is telling the Prince her bloody name and status - which presumably he already knew, as he'd had a bit of time hanging about downstairs chatting whilst he waited for her to bother leaving the attic.

Not once in the movie does passive Cinders do anything to determine her own destiny. It's depressing. And the message it sends to the target audience (young girls) is appalling.

Women get this shit from the cradle.

We're trained to put others first at the expense of ourselves. We make it into an art form.

Perhaps I wouldn't feel so very strongly about this if I hadn't seen the end result so many bloody times: women exhausting themselves, living in dangerous or unhappy situations, experiencing severe mental health problems.

It's not that being altruistic and loving other people is wrong. It's not. But if you want to be there for other people, you need to make sure you look after yourself. If you don't love yourself enough, practice self acceptance, make sure you are physically, emotionally and mentally well, you are less able to help others.

The Prince in Cinderella appears to know this. Cinders herself doesn't.

Equally, whilst both the Prince and Cinders have loving relationships with their fathers, throughout the movie the Prince moves towards adult independence, whilst Cinderella remains blindly obedient. In other words, she never grows up.

The curious irony is that her Stepmother exemplifies what happens when:
1) you prioritise others at your own expense and;
2) depend wholly on men to shape your destiny.

Just prior to locking Cinderella in the attic she explains that first she married for love, but second she married for her daughters and she lost both husbands, thus ending up with nothing. This is an explanation for her bitterness and cruelty.

However, before I got to wondering whether Brannagh was playing a deep game here in contrasting the two, he makes it clears what happens to women who try to get active on their own behalf. The Stepmother tries to exploit her situation (at Cinderella's expense) to advance herself and her daughters: she ends up banished. 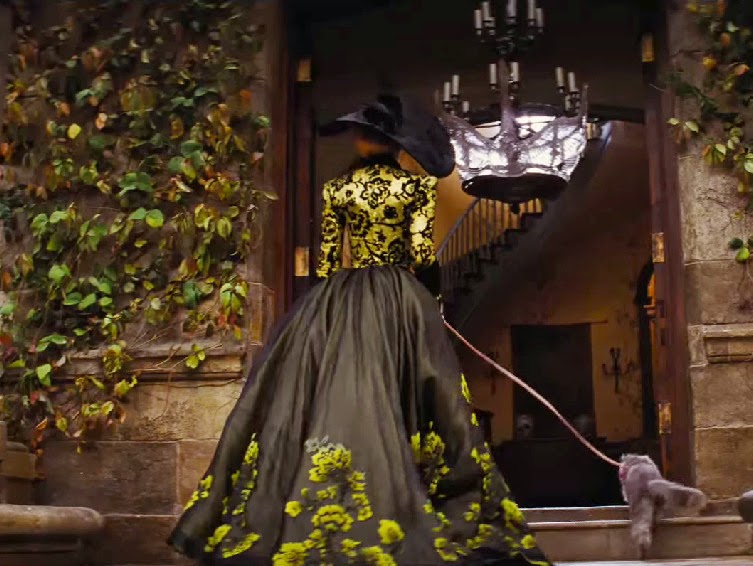 Luckily, we know Cinders won't try anything like that. She's too busy being GOOD as well and Being Kind and Having Courage. Even the dress designer knows it, telling Vanity Fair: “Cinderella wins the Prince’s heart through her goodness, so I wanted to show this through her clothes,” Powell explained. “I wanted her to stay modest and pure even though she was going to be a part of royalty.” - so like, flowers and stuff (see above). FFS.

Okay, I'm not suggesting that blackmailing others is a good idea but it would be nice to see one woman in this beautifully produced, visually stunning women-hating movie doing something to change her fate - and getting rewarded for it.

We can only hope that Cinderella, who is following faithfully in her Stepmother's footsteps (depending on a man, putting others first) doesn't end up experiencing the same fate. With luck, the Prince will live a long time and value our Cinders. Because God knows she can't do it for herself.

Putting up with being bullied and controlled isn't courage. It's self destruction.

If your child loves the new Cinderella, be sure to point out the difference.

And if you don't believe me, check out this Vox article: The Baffling anti-feminist Politics of Disney's New Cinderella  or the Guardian's Branagh's Cinderella spits at Every Disney Princess Remixer Tumblr.

Then go watch Maleficent instead.

I was so looking foreword to the movie. Now I'm not.

My favorite Cinderella is EVER AFTER with Drew Barrymore. It's the version I showed my daughter.

In EVER AFTER, the heroine solves her own problem, saves the prince, and wins everything in the end. And, while she's more self aware that her situation is unfair, she's still has self-worth and goodness. It might not have all the Disney bells and whistles but it's a beautiful film with a great story.

I love that fairy tales are reinvented with each generation (and I love Drew Barrymore in most things). I have a recollection that I didn't think the Prince was much cop compared to Drew in that version - or am I wrong? Loved the costumes in that though!

One more thing - before you make your mind up check out feminist Emmie Mears blog post - she has a very different perspective (and she loved it!): http://emmiemears.com/courage-and-vulnerability-how-the-new-cinderella-is-quietly-revolutionary/

I like this cartoon of Disney! It's a story about love! click here to apply and see what our professionals can do for you!

I have never suggested that this innocent cartoon can raise so many thoughts about different serious things. Mayve we will try just to relax and get pleasure from beutiful pictures, funny moments and wonderful songs from it...


I'm impressed, I must say. Rarely do I encounter a blog that's both educative and interesting, and without a doubt, you have hit the nail on the head. The issue is something which too few folks are speaking intelligently about. I am very happy I stumbled across this during my hunt for something regarding this. itunes login