Horror Bites: A Bag of Heads

Lovely Scottish writer Laura James is hosting a brand new flash fiction challenge , Horror Bites, and it's all about HORROR. Now, I'm not much of a horror writer. Or reader. Or watcher. I had to leave the cinema three times during Dawn of the Dead and then sleep curled up on my flat mate's floor to keep away the nightmares.

I do not do horror. But inspired by writer Ruth Long's example, I wanted to join the party. So here's my effort. The prompt?  "A Bag of heads."

A Bag of Heads 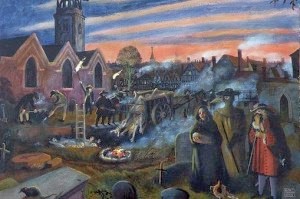 “Bloody disgusting the smell. Plague rats. Dunno why we wait around. Should set fire to the houses and be done. Not like there’s like to be any survivors and if there was? Bound to be the devil what dunnit. Helped them I mean.”

“Not alive are they? Who survives the plague?”

“Not ours to question, mate. Just got to deliver the food and run, stink or no stink.”

Frank reined in the horses and peered down the street. Shuttered houses stared blankly back, scored with the crosses that made any sane person turn and run like their arses were on fire. He wasn’t sane, as it turned out. And the money was good. It was just the stink. He didn’t like the stink.

“Righty oh.” He clambered down from the seat of the cart and grabbed a sack from the back. Guilt gifts these were, chunks of bread from the merciful who didn’t like to think of the miserable buggers they’d locked up starving before they’d erupted in boils and carked it. He kicked a scurrying rat out of the way.

Long after Frank had disappeared round the corner Bill noticed the silence. No weeping. No begging. Were the poor bastards dead already?  A cold finger traced his spine.  “Frank?”

Nothing, not except for a faint smell of roasting meat growing stronger by the second. Looping the reins over a gatepost, he hurried after Frank.

It was the bag he tripped over, Frank’s bag of loaves. It looked odd, lumpier somehow, the shape somehow familiar. And that smell… He caught a flicker of movement in the shadows and then a voice whispered, “Gramercy, sir. ‘Tis long since we had fresh meat. Have at the leftovers.”
Posted by Meg McNulty

You may not to horror but you should, well creepy loved it!!

Whoa!!! This is deliciously horrific!!! You really MUST come to the dark side!!! LOVE IT!!

At least on the dark side there's all those fires to toast marshmallows on. I'm in!

Totally gross, but brilliant! His last comment sent shivers down my spine!

Yikes—creepy! It's gonna be awhile before I can get that scent out of my nose. Where's my Febreze? ; )