I am also a contributor to another fantabulous blog, The Romanchics.  I blogged about The Romantics here.

So here’s my dilemma.

Is it possible to love romance and to be a feminist?

Moreover, is it possible to write romance and be a feminist?  Historical romance?  Paranormal romance?

In this week’s thought-provoking post, Emmie Mears interviewed Kameron Hurley, author of possibly the best article on feminism and writing I have read this year. I am in awe of this woman. She’s the voice of sanity and smartness in a wilderness of confused messaging.

Kameron is very clear that we’re all responsible for what we put out into the world. Stories are powerful. They influence as well as entertain. So we should think about who and how we are influencing when we tell our stories.

*flashback to first year at University. An English lecturer asks the class to describe some women’s fiction. “Mills & Boon?” I suggest. There is silence. A snicker. The suggestion of a sneer. “Any other suggestions?” she asks.  As it turns out she was looking for someone to say Virginia Woolf. No arguments there – but which have more women read?  Which, therefore, is more influential on our culture? Popular culture is called popular for a reason… surely?*

Oops. Sorry about that. I digress.

I am a feminist. I like reading romance. There are lots of books that I love. There are also lots of books I don’t like or which make me uncomfortable. I’m not alone in that. The romance lovers’ community over at Smart Bitches Trashy Books have no qualms about lambasting rape-her-and-she-falls-in-love-with-you story lines.

The good thing about romances is that men and women are of equal importance in them (or M/M and F/F depending on what you read).  It takes two to tango or the whole thing doesn’t work.  Women aren’t just the love interest. Love is the central theme around which both characters rotate.

Compare this to Sci Fi, even modern Sci Fi (check out Emmie Mears’ post on the new Star Trek movie), where all too often the role of love interest equates to being sidelined.

So, the two characters are of equal importance.  However, that doesn’t mean that the characters themselves can’t reinforce every stereotype under the sun. There are romances in which alpha male characters are vile and sexist, jealousy is considered a sign of true love and rape excused (*looks askance at Johanna Lindsay*). There are romances in which women require rescue, are valued solely for their virginal innocence and looks, have to learn to submit to their men and can find contentment only in motherhood and domesticity.

These things do exist in romance – and in particular lines they exist in abundance - but I don’t like them.

Billionaire misogynist’s requiring taming? Not for me, thank you very much.

Innocent governesses’ waiting to be treated like crap? No thank you.

That word innocent as a sexually appealing trait seems to crop up again and again.  To me it casts heroines in a child-like light and frankly, that makes me queasy.  Also, defiance as an eccentricity – or something to mastered.  Oh please.  Even as a child, Barbara Cartland did nothing for me.

However, there is another way and there always has been.  Decades ago, Georgette Heyer, the grand dame of historical romance, was writing clever, pragmatic and forthright heroines, along with heroes who were, well, nice - and who liked women (yay for Cotillion). 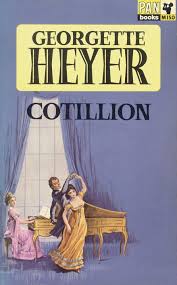 Weirdly, one of the reasons I've always been more attracted to historical romance than contemporary romance is that there seems to be more equality in them than in contemporary romance. Maybe that's because both the hero and heroine are operating within (and often transgressing) social constraints and expectations, where as contemporary heroines don't have the same constraints. They are therefore choosing to cast themselves in the role of virginal princess in the tower. That isn't the kind of woman I can identify with.

Today we have authors (especially in the field of historical romance) like Amanda Quick and Eloisa James, who manage to cast men and women on an even footing, who don’t require virginity as a prerequisite to happiness and occasionally don’t even have their couples marry. Okay, that’s an exception but still, it was an exciting variation on the theme. There are also contemporary authors like Jennifer Crusie who write heroines and heroes who seem, well, okay. Independent. Non-misogynistic. Equal status. Equal salary.

These women – bestselling authors who write a great story – offer me hope that romance can not only not reinforce unhelpful stereotypes, but can be an active agent for change. And give you a nice glow at the same time.

You can be a feminist and love romance.  Fact.

Now for some extra reading:

Virgins in Romance - a fascinating interview with Jodi McAlister

Great post, Meg. I'm rather obsessed with the subject of feminism and romance. I believe if can exist, and I hope that books are heading more and more in that direction. I wish more romance writers would incorporate strong, independent post-feminist heroines into their stories. I don't read the ones that don't, so I guess I feel like there are a lot out there who do, since I read a lot of romance! I actually wrote my academic thesis on this subject (with an emphasis on shifting trends in marriage) and published an extremely condensed version in USA Today recently. If you're interested, check it out here: http://www.usatoday.com/story/happyeverafter/2013/05/03/sophie-moss-seal-island-trilogy-romance-appeal/2130459/
I look forward to reading more of your posts on this subject! :)

Such a fascinating article! I have to admit that the Twilight series made me really concerned about the future of feminism, but the trend of books like Hunger Games has given me hope, and there are a lot more proactive female heroines in romance lately. Wonderful food for thought : )

Thanks so much Sophie and Diane - Sophie I would LOVE to read your article on this. Sounds fantastic! Happily you are both examples of authors who write strong female characters :-)