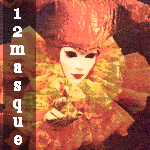 I thought it was only right that if I was hosting #12Masque I should also be contributing.  Put your money where your mouth is and all that.

My story is inspired by an image that I found disturbing - it took me outside of the mystery of the masquerade and made me think about the masks people wear, all the time and in lots of different ways. The faces people put on to make things better, to get by, to hide and to reveal.

The scar seemed to shimmer on her wrist, livid against her pale skin. A brand, or a summons. Veronica hunched her knees up to her chest, tight as a drawbridge.  She smelled stale, sleep-warmed. She hadn’t showered in two days.  Impossible to close her eyes.  In the darkness all she could see was slick edged razors against her skin, opening her up.

She needed to open up before she collapsed in and became a black hole, consuming anything that came too close. Or anyone.

Heat slithered down her cheeks, pooling in damp patches on the faded duvet cover.   She tasted salt on her cracked lips.

You can make it stop.

But she couldn’t, not with Gracie and Ella sleeping next door, sticky haired and flushed, chubby arms thrown out wide with the confidence of the loved.

How long had it been? Two days? Two weeks? Two months?  Did it matter?

“Ronnie?”  Her husband called from downstairs.  “Are you awake?”

Quickly, she scrubbed her salt-streaked face, sucked in a deep breath.  “I’ll be down in a sec.”

Kieran looked round as the kitchen door banged open.  “Shona popped by with some work stuff for you.”

“Great.”  He watched as his wife flashed a brief smile, tucking her shirt into her waistband.  Not looking at him.  “You lost weight?”

“Me? I wish.”  Bright as a daffodil, she hid behind her compact, fingers rooting in her make up bag.  When she emerged it was with soot-coloured lashes and glossy pink lips. And that smile that looked like it had been plucked off a mannequin and glued to her face.  Not her smile.

“Ronnie are you okay?”  He reached out to touch her arm, but she was out of his reach before his fingers brushed her silk sleeve.  It was like grappling with a will O' the wisp.

She didn’t answer.  “The kids are still asleep.  Can you wake them?”

But she was gone, the backdoor slamming behind her.

“How did it happen?”  Kieran looked up at the young policewoman sitting awkwardly on the edge of the chair.  His chest felt lead-lined, saturated.  The enormity of what she had just said was impossible to comprehend.

“She just stepped out in front of the lorry.  He couldn’t avoid her.”

“Jesus. Oh Jesus.”  His voice broke and he knew shame.  A man should be strong.

“What will I tell the girls?”

“You’ll put a brave face on. Children are resilient.”

“She was sad,” Gracie whispered.

Kieran sat on the bedroom floor and picked up a doll, staring down at it.  “She was sad?”

“Her eyes were all red when she wasn’t wearing her face.”

A sudden memory. Ronnie standing in the bathroom, lipstick in hand. “Just let me put my face on.”

Putting his head in his hands, he wept.

Now for the other tales...


RED ALERT!! Due to a Blog Malfunction  and a misunderstanding with Inlinkz @lastwordy and @DavidALudwig's stories weren't posted.  It's too late to add them to the InLinkz voting, but please do read and consider their stories when judging the Fan's Favourite!

25. Tongues of Fire by @lastwordy

26. And a Cape to Match by @lastwordy


You can vote for up to TWO stories - voting closes midday (GMT) Sunday 13 January 2013. There are THREE ways of voting.

1.Click on the vote button below the thumbnail. Voting closes tomorrow.

2.Vote via Twitter by sending a Tweet to @charitygirlblog with the hashtags #12Masque #FanFav and including author, story number and story title (if known).

3.Vote by leaving a comment below the contest post on DarcytoDionysus, including author name, story number and title (if known).

Remember, you can't vote for THIS entry - it's ineligible!

Oh, I think you just ripped my heart out! Wonderful writing! Terrific characterization! How many times have we heard that phrase and thought nothing of it. This is just stunning, Meg!!

A hard read, Meg, but so well written, and so very sad. Depression is a brutal thing, and you've captured the loneliness and heaviness that are its close companions. Beautifully done!

Damn genius Meg! You caught the aspect of depression that nobody ever does. I loved it!

It's like those damning words 'I'm fine.'
You caught her husband's uncertainty and anguish perfectly. Understanding or even seeing depression can be so hard for someone who's never been there...and children often see it sooner than anyone else.
I'm rambling, but only because this piece has affected me so deeply.
This was wonderful, and written by someone who knows. Thank you, a piece that understands the masks we wear so well...

So gorgeous—your writing really nourishes my soul because it's not only exquisitely beautiful, it's the TRUTH—unvarnished, unmasked. I'm really impressed you dared to tackle the topic of depression without falling into the "unhappy woman must be abused by her husband" stereotype. This piece is fresh and agonizing—it's so well done you could submit it proudly to any literary journal. Can't wait to read more of your writing.

So brilliant, so exact. And the children could see it, when the husband couldn't. Always the way. Heartwrenching. Great piece!

Not much more to add but just to echo the others, this was brilliantly written. How many times have we all 'put on our public face'? - made me think this one :)

So intense. Who hasn't hid behind a mask before? Especially women, who are almost expected to wear makeup. I thought the lipstick part was really well done, and the brief, quick-moving scenes added to the desperate heartwrenching tone of the piece.

So sad, so poignant in the way it's been written, and no one could have done it so well, Meg.

Aw,, what a heartbreaking story! Wonderfully written and so very, very sad!

Thank you for all the wonderful comments, much appreciated! I felt like this was an important aspect of mask-wearing to tell :-)

Love this and your take on "masks". So real and vivid.

Couldn't comment the first time I read this because I started crying. Beautifully written, though sad. I like that you've woven the mask through the story "You'll put a brave face on." and "Just let me put my face on."