And I like that Lillie McFerrin who seems to be in charge of it all.  She's a good egg.  So I thought I'd give it a go and this week her theme is PIRATES.  Now, you'd think with a theme like that and a penchant for historical romance  I'd be swashbuckling your ass.  But no.  I was in a gloomy frame of mind and decided to plump for human trafficking and lascivious space pirates.  Yeah. 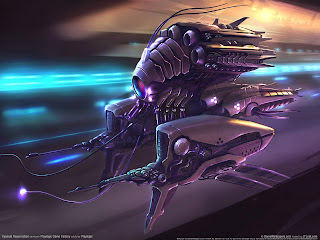 When she slept she dreamt of fetid darkness, the heat of women’s bodies pressed too close in the heavy wooden crates which groaned like a chorus of tortured men as they shuddered with the motion of the ship.

Opening her gritty eyes she stared up at the bulbous face of one of Them - the creatures whose vast ships had turned the skies black, who had sucked the world dry and stowed Earthlings like toy soldier regiments in this vast hull.

Thrusting a bar of food into her hands, the creature mechanically moved its antennae over her trembling body, searching for bruises, injuries, anything which would damage its acquisition.

Its high pitched click of approval brought a strangled scream rushing up into her throat; her last thought was of the other ship, of darkness, of rough hands and death.

Excellent work here, Meg. Really fantastic. Chillingly detailed, rocking premise. You wrote a terrifying story in so few words. My favorite line was the one of how they sucked the world dry and stowed humans like toys. Dark, but I'm glad you didn't swashbuckle my ass. This is good.

Thank you both for your comments. I do think it's rude to swashbuckle one's fellow writers' asses so I am glad I refrained ;-)

Space pirates' kick ass too! Great piece Meg, chilling is definitely the right word - and I loved the line '...heavy wooden crates which groaned like a chorus of tortured men...'

Great story very dark but I still enjoyed it. I loved your last line. It made for a good ending even though it did give me the shivers.

Wow! great stuff. I'm glad you have decided to play in the FSF sandbox. Careful, though. It's addictive. I loved your contribution. The descriptions are top-notch!

Wow, very nice -- especially since I think people have a tendency to go for crazy long sentences when they do these, and I loved that you used one of your precious sentences to say “Awake, Subject 13097087.” Great descriptions and characterization too!

Awesome! Who doesn't love space alien pirates? You hit so many buttons in this short piece...

Great story.
A lot of sinister tension in so few words.

Oooh Meg, so well done. "...crates which groaned like a chorus of tortured men as they shuddered with the motion of the ship" sounds just so... well so darned piratical, I love the turns of phrase you used. Great read.