The woman’s whispers sighed like the sea carrying warnings and unrest.   Dark plumaged, they crowded together the black-headed gulls that flocked to rocky shores of Salamis.  On the knee of the Princess, a red-faced child squalled.  “Pyrrhus.” She pressed him to her bosom.  “Hush.”

Dusty and salt-stained, two armour-clad men standing in the doorway exchanged glances. “We will get nothing from them,” the larger of the two muttered.

A slow smile twisted his companion’s lips.  “Not from them.  But we are not looking for them, Ajax, my warrior.” With a neat bow, he waved forward the warriors standing behind them.  “Gifts for the women of Scyros,” he said. 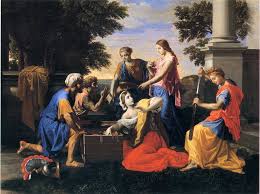 Silk of Tyrrhian purple was spread across the floor, chains of gold and silver tossed on top, girdles and cloaks, tunics woven from the softest wool.  Hands stretched out, plucking and stroking, cries of delight echoing around the room.

The King of Ithaka raised his hand.  “Wait.”

Gleaming like blood, the silk shifted to reveal a bronze spear, bright as a lightning bolt.

In the distance, a bell began to toll.  “Invaders!”  A soft shout from the back of the room.

“Where is he?”  His voice rose.  “Will the Son of Peleus allow Skyros to be invaded?”  His gaze fell upon the child, tear streaked and sobbing against his mother’s shoulder.  “Will he allow his woman to be raped, his son to be butchered?”

He had been sure, so sure that no man of warriors’ blood could resist. Sure that Achilles would leap forward from the shadows unable to resist the sword’s siren call.  Sure that they would find him here, disguised.  Sure they could drag him to Troy.

In the chaos of swirling veils and coloured silks he lost sight of the princess, of the child, failed to see her touch the broad shoulder of a tall woman.  Failed to see them slip away into the shadows, hurry to the stone workshops at the back of the palace complex.

Away from Odysseus’ sharp gaze, the princess laid the child to kick on the dry earth and slipped her hands beneath the veil of the woman, thrusting her hands into her companion's red-gold hair.  “It’s a trick my love,” she said.  “You know that?”

“I didn’t play suitor to the Spartan whore,” Achilles said, cupping her face.  “And I owe the kings of Hellas nothing. Let them fight their petty wars. I stay with you.”

“You give up the chance for glory,” she said.  Her voice cracked, thin and dry as the arid air. “You must be sure.”

“I’m sure,” he said. Under the shaded veil, her warrior smiled. “I choose life.”

This story is inspired by a myth from the Trojan mythic cycle, wherein Achilles has been sent to the court of King Lacomedes to be disguised as a girl, to avoid being drafted into the Trojan war. However, there is a prophecy that Troy cannot be won without Achilles and so Odysseus and Ajax go to Skyros to find the young warrior. Odysseus tricks him into revealing himself by hiding a spear amid piles of clothes and jewellery, which the young man can't resist.  In another version he stages an invasion and when the women run, Achilles prepares to defend them, thus giving himself away.

Here I present an alternate version in deference to the prompt I was given which forbade me from killing any of my characters.  In this version, Achilles makes a different choice.  He chooses a peaceful existence at home.

Written for the #DiceGames contest run by the fabulous Timony Souler following these rules:

My prompt:
"don't kill any of your characters."
Posted by Meg McNulty

Oh, I love this retelling. It is striking to me how the cycle of violence can be stopped, or at least mitigated somewhat, if the principle actors elect to lay down their arms and choose life instead. This is especially poignant, with lots of wonderful imagery.

Awesome, I was waiting for a real mythological delve, and this alternate choice for Achilles is just plain awesome.

Gotta say I love the keen eye and plotting of Odysseus here--I always liked him and feel you captured the character perfectly here going beyond the clever ploy and witty confidence, and getting into the very body language that would go with those characteristics.

I also love that Odysseus doesn't figure out Achilles' ruse here, because this alternate choice would probably be inconceivable even to the clever king.

This is so full of beautiful imagery! Loved that telling line 'In the chaos of swirling veils and coloured silks he lost sight ...'