If you follow this blog.  Or my Twitter account.  Or even pass me in the street you will probably have picked up on the fact I was the teeniest bit disappointed in 2011's Captain America (5 Ways to Kill Conflict and Bore the Hell out of People). 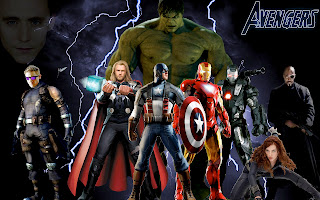 It went right, in as much as a big ensemble superhero movie CGId up to its multimillion dollar eyeballs can go right.  Why did it go right?

Having just read the utterly fabulous Laurie Hutzler's (hat tip to writers' champion Ruth Long for introducing me to Hutzler) blog post on the Avengers I knew to expect some decent characterisation.  I knew that Loki was a "Power of Idealism character" whilst the Hulk was "Power of Will."

But I didn't understand before seeing it was just how beautifully each individual relationship played off against each other.  Cap's overweening conscience ran slapbang up against Iron Man's wise cracking irresponsibility.  Nick Fury's cunning found its opposite number in Thor's transparent honesty and open heart.  Fast paced external events drove these disparate characters together and once together their innate characters, drivers and emotional baggage nearly tore them apart.

So when Captain America and Tony Stark (Iron Man) spat...
Steve Rogers: Yeah. Big man in a suit of armor. Take that off, what are you?


Steve Rogers: I know guys with none of that worth ten of you. I've seen the footage. The only thing you really fight for is yourself. You're not the guy to make the sacrifice play, to lay down on a wire and let the other guy crawl over you.


Tony Stark: I think I would just cut the wire.


Steve Rogers: Always a way out. You know, you may not be a threat, but you better stop pretending to be a hero.

...you know that to achieve fulfilment it has to be Tony Stark who is the one to be a traditional hero.  He's creative.  He's clever.  But in the end, it has to be raw bravery he exercises - Captain America's stock in trade.  And the Captain, he has to rely on Tony's cleverness and his creativity.


At the end of the Avengers each character has experienced something of a journey, in as much as can happen to a gang of people in the space of a couple of hours.  The plot's twists and turns have forced each to their limits: learned to love, or to trust, or to have faith in themselves, or to value something different.


Thank God for that.

Excellent post!!! That Cap vs Stark scene had me going 'yeah, something tells me Cap is gonna eat those words' but when it plays out, WOW! I thought I was gonna pass out because of the huge emotional payoff!!!

So glad you enjoyed the movie and allowed Hutzler and me to play a small part in your reconsideration of the Cap (who makes those boxing sweats smoke!).

So glad you like the Captain now! I flinched when he said Tony was just a man in a suit. Really flinched, and I remember hoping he'd be proved wrong. That both of them would somehow improve on themselves in their partnership. So happy that they did!

I'm ashamed to say I haven't seen it yet. Based on this evidence, this MUST change.

It's not the best film in the world - not as good as Christian Bael's Dark Knight but it's hard to make an ensemble film that works, where the characters play off against each other (the best I can think of is the Magnificent Seven) and this does a fair job of it. Long CGI action scenes get a bit dull after a while but the dialogue is excellent.