Birth of a Minotaur 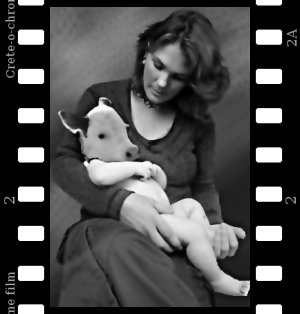 Birth of a Minotaur

Shadows slid along the wall.  Monstrous shapes, caught in the flare of candlelight.  She heard the moaning cries of the women, heads covered, ashes scratched into sun darkened faces.

Ariadne pressed herself into a corner.  Silent, huddled.  If she saw Thanatos coming she would act.  Throw herself in his path, a willing offering to save her mother’s life.   Death would not, could not take her.


The Queen’s engorged belly pulsed, rippled.   A terrible cry tore from her throat, echoed round the room. In the fields by the shore the King’s bull roared in bestial response.  The sound rolled out across the seething ocean like thunder.

The gods were moving.  Ariadne could smell it in the rain thick air, in the gathering of the night.  Strange happenings were afoot.  Death stalked the Queen silently, invisible, his skeletal hand cupping the huge convulsing belly.

She will not die.

Another roar and then there was blood, so much blood.  The women screamed, the midwife held the wet, dark-stained body to flickering candle light.  It moved.

The Queen stirred weakly on the soaking pallet.  Reached out.  With trembling hands the midwife handed the babe to its mother, all the while staring away, unable to meet the Queen’s eye.

“A boy?”  The Queen whispered.

The midwife took a step back, her hand moving as if to fend off a dark curse.  “An abomination!”

And that is when Ariadne saw her brother’s head.  His broad snout.  His dark, blinking eyes.
A bull-child.

Tonight I was reading my daughter stories from her favourite book, Sara Fanelli's Mythological Monsters of Ancient Greece.... cue lots of questions about the Minotaur.  That got me thinking about what it would be like to be part of a family in which such a birth occurred and particularly about the impact on Ariadne - who would go on to ensure his death at the hands of Theseus.

Sibling rivalry?  Revulsion at the knowledge her mother Pasiphae had slept with a bull?

This microfiction describes the moment of the Minotaur's birth, witnessed by the young Ariadne who has no concept of the implications of her half-brother's arrival.

I totally wrote Ariadne and the Minotaur a story because I wondered the same thing about what kind of relationship, if any, they might have.

And I love everything about this piece of flash, except for the very last line! I think it's the break in tone. Up until that point we are so perfectly caught up in Ariadne's child-like responses, and I love her voice.

This is wonderfully creepy and dark. I love the description of setting and atmosphere, and the horror of the revelation.

@Bullish and Lena - thanks for your lovely comments!

@Amalia T - you know what, you're damn right. It takes it right out of her POV and into some omniscient narrator, like the intro voice over to a dodgy movie. Good call!

Still love how you handle the myths, very humanizing and more deeply invested in the characters than I'm accustomed to.

Sorry I've been away so long, always seems there's more to do than time to do it in.

Fantastic - I'm fascinated by the world from the minotaur's perspective and I hate the one-sided evil charicature we have of him. To see his sister's point of view is excellent - thank you

The weed I was still breathing in from being next to the brazier was making me more spaced-out. I could feel myself vomiting but in my vision I was climbing a tree, waving down to She Bear who sent her spirit-self up to accompany me. I went up and up passing clouds and seeing the stars getting nearer until my head broke through a thin cloud and I was on the green sward of my upper world.

Heavy hoofs thundered towards me and a mane of thick curly black hair flashed in the sunlight but I wasn’t afraid, this was my spirit, my Minotaur. I bowed low before him and he held up a muscular arm to smack my hand. I embraced his human chest and then ran a hand across his bull head – it had been years before I felt I could touch him so closely but now … only Iamo is closer to me.

Minotaur turned to greet the She Bear spirit who was present by my side. We walked towards the pool in the centre of the glade and he said directly into my brain, his bull head makes it impossible for him to speak out loud,

“You have been absent so long, Riga and so much hate and poison is in your heart.” I remembered when we had first found each other, Minotaur had thrown me in the pool and I had come out a baby, crawling on the sward amongst his hoofs, it had been a re-birth for me – was this what he was suggesting again? I bowed again to show that I had total confidence in him.

Minotaur threw me on the ground and I could feel that in the journey room I was throwing up again. The rope around my wrist was tugging. Minotaur waded out into the water, carrying me in his human arms and dunked me in the water, once, twice, three times, then laid me on the grass again to dry out. I looked up at him, towering over me and at She Bear, her little eyes full of concern for me and I wanted to cry. Nobody but Iamo loved me as much as these two and I had been away from them for so long.

The weed was taking over and I was losing the thread of the vision. I managed to ask Minotaur
“The council, the ring, who is the traitor, give me a sign… please, old friend,” he sent me a vision of horns and a spear with a ribbon on it. I felt the rope tug on my wrist again. It was time to go, the drumming was getting faster.

I embraced both my spirits and I felt myself falling again, this time falling back to earth. I came to on the mat, covered in snot and vomit – sometimes it is really good fun being a Shaman, other times it is just wild!

Wow Cameron - thanks so much for sharing! Brilliantly different perspective - very much looking forward to reading the full novel :-)