#ThursThreads: No doubt it's a murder

This week I popped on over to Siobhan Muir's blog to join in her #ThursThreads flash fiction challenge.  The rules are simple:
This week the prompt was: 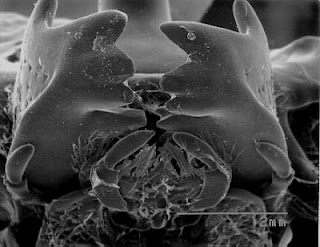 The hush was palpable, thick as tobacco smoke in the crowded room.  Two men huddled around a simple wooden table, in front of the audience.  A chair scraped on the back row, a throat cleared.  Before their naked eyes, the autopsy had been completed.

Benedict Marlowe PhD coughed.  “And thus, I argue that the death of the Amazonian Chulipoteridae represents an unusual form of self sacrifice.  This is voluntary act and the horned males compete to win the opportunity to die in what appears to be the throes of ecstasy.”   He lowered his head, modest.  Never did to appear cocky in front of the Most Learned Society of Coleopterists.

Leaning over the microscope, Cranbourne Roberts laughed.  At least he uttered a kind of elongated wheeze, rusty at the edges.  Enough to make Ben stiffen, press his lips together.  The old bastard had never liked him.

“A pretty argument, lad.  But there’s no doubt it’s a murder, no doubt at all.” He wheezed again, looked at the faces on the front row.  Hungry.  Ready to see blood on the floor.  “Throes of ecstasy did y’say?  Ah well, I was young once.”  One wrinkled eye squeezed slowly shut.  A wink.  A titter ran round the crowd, a communal sigh of satisfaction.

Professor Roberts never disappointed.  Ben clenched his teeth.  Five years in the jungle, three on this thesis.  This was his moment, his!

His fingers curled, as if they were already round the old bastard’s throat.  Murder. Oh yes, there’d be murder.
Posted by Meg McNulty