Writing an earlier post about my unfinished Selkie story (One Dark Night) I suddenly recalled the (fictional) existence of another Selkie, who appears as a minor character in my (also unfinished) novel Serendipity.  I love Thorstein.  He's bold as brass, unrepentent and larger than life.  Here's an extract, when my heroine Perdita Moon meets Thorkstein for the very first time.

“Murúch skin?” Thorstein’s eyes grow round.  I have never before seen a shocked seal, before tonight I should not have thought it possible that I could. “You cannot be serious.”

“It is but for a few hours,” Sirius says, his tone as beguiling as honey and a soothing smile upon his lips.  “They will be returned.”

“You expect my people to be frozen as men?”  Thorstein rocks back on the ledge.  He looks ready to slip into the sea.  Sirius makes a scoffing sound and his black brow rockets quizzically. 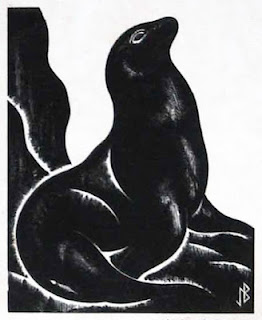 “It is a full moon – do you expect me to believe they are not in man-form seducing the mortal women of the island?  We both know they are.  They will have their skins back by dawn – they will never even know.”

Thorstein’s eyes narrow.  “And what do you give me to take this risk?”

A tut escapes me and Sirius grins at my obvious revulsion.  “Dragon urine is very useful, Perdita.  If you soak a cloak in the stuff, it will become immune to fire, even dragon fire. Only the Ignisari Fae and the Dragon Sídhe themselves usually have access to it – it is very rare in the Outerlands.”

“True, true,” Thorstein sighs.  “How much?  For a gallon you can have three cloaks. Only until dawn, mind."

“We need only two.  And you will have them long before dawn.  Actually no, we will take three.  We could use a picnic blanket.  Throw in some saffron bread and álfar mead and you have yourself a gallon of the finest gold elixir any dragon can piss.”

“A picnic blanket! By Lir, I did not hear you say that.” He shakes his sleek head.  “You will ruin me, you thieving son of a goblin.”

Sirius grins.  I can feel the taut excitement in his muscular arm; it is obvious he is enjoying bartering with the beast.  “I am sure you have a son in law you would like me to squat on.”

Thorstein bares his teeth.  “Aye, you can take Sett Lodansson’s pelt.”  Tremors of laughter shake the grey slabs of his flesh.  “I like that.  A deal!”  He slaps the ground with his tail.

“What pool will Abelard use?”

Thorstein rears up and cranes his neck.  “I’ll show you.”  Before our eyes his great bulk quivers, bulges and grows indistinct.  In the bright moonlight his metamorphosis is obvious and striking.  I gasp, fascinated as he roars and stretches his arms, shaking his shaggy mane of hair. 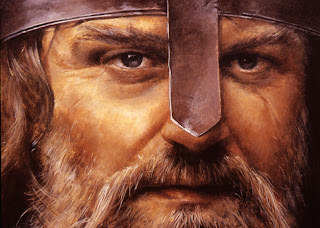 Thorstein smirks into his chest length beard.  “Why be modest, when you have my looks?” He rumbles, his colossal shoulders shaking.  “You’re not far wrong though, little human.  I have many sons amongst those Vikings, many grand children.  A fine, strong people.”

“Quite,” I say, feeling rather faint.  It is difficult not to feel somewhat awestruck when faced with such a mighty and unashamedly nude male.  I had thought Sirius’ shoulders the broadest I had ever seen.  I was wrong.  Sirius glances down at me sharply, detecting the trace of awe in my tone. A frown appears between his eyes, but I barely notice. “So you are not a Viking then,” I muse.  “A titan? No, who was that fellow with the world on his shoulders? Ah, yes – Atlas?”

Thorstein grins, his teeth gleaming white in the dark wool of his beard.  “Getting colder!” His eyes glint.  “I expect you’ve heard the legends of the Murúch; famous lovers of mortal women. Unforgettable. Potent! Lesser folk beg for drops of our blood, just to deliver a flicker of what we have to offer.”

“Really?” I lean forward, intrigued by this information.  “How fascinating!”

Thorstein takes a step towards me, muscles bunching in his tree trunk thighs.  “Perhaps you would –“

Releasing me, Sirius steps in front of him and grab a fistful of his beard, yanking him off balance. “It may be full moon, blubber-belly, but I don’t see Perdita weeping into the water do you?  So keep your hairy charms to yourself before I gut you with a fish hook.   Show us the pool, give us the skins and we will be gone.  And you might even keep your potency that way.”

Haha! I want to read MOAR of this too! Love it! So much fun.

Um. I have to know if Perdita and Thorstein make it happen, because I am rooting for him SO HARD.

Sadly not - she's merely intrigued by his Selkie allure, but she gets whisked away by her Fae bloke!