There's nothing like coming home from a ropey day at work to find you've won a contest.  This week I was the proud winner of Rebecca Clare Smith's SatSunTails contest, with a short story based on two prompts.  It's called The Watcher.


Here's what Rebecca had to say:

"I’m sure that when you read this you will appreciate why I chose Margaret’s entry as the overall winner. She builds the tension beautifully up until the final moments. Enjoy."


Prompts:  "with ear-splitting indifference" and the image below. 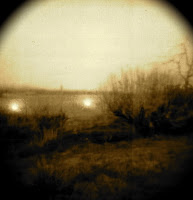 Around him arid winds laid waste to the barren fields, tattered his robes.

He watched as the three moons circled in the tawny sky.

He watched as dwellings were built, the salt smell of labour drifting in the parched air.

He watched as they were razed to the ground.

He had been The Watcher for three millennia.  It was his birthright.  To watch for the Prophecy Fulfilled.  The Coming.

The Watcher was bored.

As the billionth sandstorm raged across the brown plains of his home planet, the Watcher yawned.   Stretched.  Closed his eyes.

In his ear-splitting indifference, he missed The Coming and failed to give The Welcome. Two days later (when the Apocalypse came) he was heard to cry, “At least it makes a bloody change!”
Posted by Meg McNulty

Splendid Entry! I'm a new blog and twitter follower. We have similar interests.Here's a bit of flash fiction you could appreciate.

Thanks Chris - I was excited to find your blog too! Am following :)