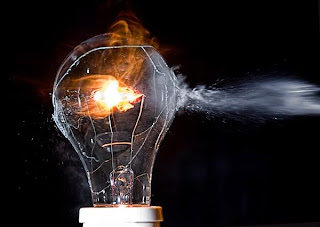 "It was an incongruous silence that bled dry the earth".
A story in 150 words


This story is my entry to Rebecca Clare Smith's brand new writing contest #SatSunTails.  As you can see here it got an honorable mention, coming second to Jeffrey Hollar's wonderful story.

The prompts are this image and the quote above.  Here is my story....


The birds were silent.  That was the first sign.

The second was the absence of wind.

And then the lights went out.  All the lights.  The headlights that beamed from Leif Eriksson’s battered campervan, the tiny reading light embedded in the roof.  He saw the leap of a flame, as though a bullet had shot through them and then they were gone.  There was just darkness and starlight.  Until the stars too, began to fade.

He swallowed, steadying himself against the tree.  The knowledge of what was to come had been passed from father to son through three hundred generations.  There should be peace in the knowledge but he felt no peace.  Just cold terror that tore his throat and sucked the air from his lungs.

In the darkness, he  smelt the acrid scent of burning, the chill of frost.  Fire and ice.  The earth will bleed.

Ragnarok.  Twilight of the Gods.
Posted by Meg McNulty

You both wrote amazing stories and deserved the recognition that you got. I'm glad I was near the bottom and received the critique. :)