Hurray! I'm a #MenageMonday winner!  Menage Monday is run by the lovely Cara Michaels (she of #WIP500 fame) and the judge was Kathleen Doyle.  You can read all about it here.  Here's what the judge had to say:

'Margaret (@charitygirlblog) is the Overall Winner for her gritty and poetic use of words: ”…spilling vomitsome tarmac from its fume-filled maw.” Gorgeous prose.' 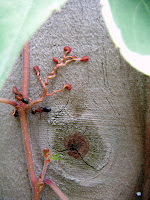 Prompts were a phrase, an image and a scenario e.g.
Phrase: "It's almost time."
Scenario: Strange and fantastical happenings in the garden.

Paint peeled from the shed, burst and scarred by incessant sunlight.

And almost, almost the experiment was about to come to fruition.

He bent down to whisper to his children, stroked their shining heads lovingly with one bony finger.  “It’s almost time, my darlings.”

They shifted restlessly, scrambling over each other in their rush to escape his touch.  They had never seen the cruel light, not his babies.  Never been scorched by its harsh rays.  He had tried to protect them.  Whilst the concrete jungle spread, spilling vomitsome tarmac from its fume-filled maw. Whilst his garden grew tangled, wild, unkempt.

With shaking hands he pushed the rusting door open, forced his way into the light.  A jogger ran past the fence, feet pounding.  Noise, more noise.  More intrusion.

With the sun on his face, he smiled.
Posted by Meg McNulty