The Massacre of Glencoe

The 11 February was my husband's birthday.  The time of year at which my husband was dragged, bum first and bawling, into the world was fiery, blood soaked and angry.  His first breaths were taken under emergency lighting due to power cuts relating to the miners' strikes in a country just coming to terms with the tragedy of Bloody Sunday across the Irish Sea.   And the third day of his life marked the 280th anniversary of the Massacre of Glencoe.  As the midwife cut his umbilical chord something of this must have seeped into his infant body: he has spent his whole life campaigning against injustice and bigotry.


This weekend he was forty, so we headed for Glencoe.  A complete coincidence.  It wasn't until standing in the Glencoe visitor centre that we realised it was nearly 320 years to the day since the Clan Macdonald were slaughtered on the ground on which we were standing.

Any visit to the Highlands is awe-inspiring and eery.  Standing in Glencoe, watching the clouds roll across darkening skies and the shadows dance on the hills I was struck by its stillness. 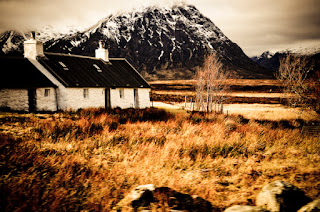 Not now.  Silence reigns in the Highlands.  It's why people go there - to get away from it all. And yet, there's a sadness that echoes down the centuries.   We have a wonderful, desolate landscape but it came at a bloody price.


The story of the Glencoe Massacre is well documented.  I won't repeat it (you can hear the Corrie's sing it).  What got my imagination running on wheels wasn't the massacre itself but that the Campbells who raised their hands against the Macdonalds knew them.  They had spent twelve days feasting with them before, acting on government orders "to put all to the sword under seventy" they massacred their hosts.

It's said by some that some of the soldiers warned their hosts and gave them a chance to escape into the blizzard.  It wasn't much of an escape.  Forty women and children died in the snow.

Here are some pictures from Glencoe and Rannoch Moor, taken just today:

For more about the Glencoe Massacre pop over to the BBC History pages, listen to the Corrie's haunting Massacre of Glencoe, watch a documentary about the Massacre, or read T S Eliot's Rannoch, by Glencoe:


Here the crow starves, here the patient stag
Breeds for the rifle. Between the soft moor
And the soft sky, scarcely room
To leap or soar. Substance crumbles, in the thin air
Moon cold or moon hot. The road winds in
Listlessness of ancient war,
Langour of broken steel,
Clamour of confused wrong, apt
In silence. Memory is strong
Beyond the bone. Pride snapped,
Shadow of pride is long, in the long pass
No concurrence of bone.

Your pictures are really incredible. Such a sad history. I need to read about it in more depth. Your post has inspired me to do so.

A lovely translation of our Scottish history. Beautiful and haunting pictures of Glencoe, I'm there.