“The man carries the book.”  I read it in Beyond Heaving Bosoms and it caught my attention.  So much so that it I blogged about it. It's true. So true that it makes my beat my head repeatedly against a brick wall for never noticing it before.

I'd thought about the heroine.  She needed to be likable.  Someone you might pal up with, share a beer.  No?  No.  Heroines can be Too Stupid To Live.  They can be Too Annoying To Be Allowed to Live.  But when it comes to it, it doesn't really matter.  Maybe it's because we've had moments of being annoying, capricious and down right dumb and wanted someone to love us anyway.  Maybe it's because we are focused on falling in love with the hero and the heroine is just a foil.  I'm not sure, but I know it's true.

Evidence 1: Today I saw the Princess Bride at the cinema.  Remember that?  Ace swashbuckling fantasy romance with a dashing Cary Elwes and a beautiful Robin Wright.  Indisputably, Princess Buttercup (Wright) is beautiful.  She's also a right royal pain in the backside.  It doesn't matter.  Because Westley is clever, witty and utterly indomitable.  He believes in True Love and he knows that his True Love is Buttercup.  Gratuitous quote coming up:


Buttercup: We'll never survive. Westley: Nonsense. You're only saying that because no one ever has.


Cue a wonderful, wonderful film and a hero who makes it into my Top Heroes of All Time not once but twice (pre and post pirate makeover).


I was going to write an Evidence 2 but in actual fact the evidence lies all around.  Disney's Princess Jasmine?  Pain in the ass, but Aladdin loves her feistiness.  Sarah in Labyrinth, passing up on David Bowie's Goblin King?  Wake up teen princess, you'll never meet a man in breeches like that again. Baby in Dirty Dancing? And let's not even get onto Andie MacDowell's character in Four Weddings and A Funeral. 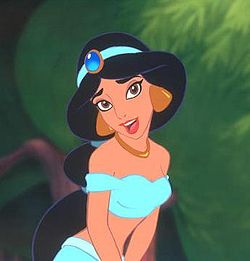 Of course, let's not be down on the heroine.  A superb heroine matched with a superb hero is unbeatable.  Let's take Powell & Pressburger's black and white classic I Know Where I'm Going.  Or Yul Brynner and Deborah Kerr in the King and I. Damn it, Deborah Kerr in almost anything - she's always good value. Ditto Katherine Hepburn.  Seemingly, in the war years, heroines were made of sterner stuff.

But it's the hero you fall in love with.
Posted by Meg McNulty

You make a good point and upon reflection, 99% of my stories have male leads (hero and evil villain). :)

Now i've noted it, I see it everywhere! It's so true!