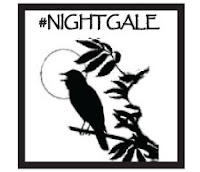 Today is the last day of Stevie McCoy's #NightGale challenge, inspired by the Romantic Poets.

This week's prompt is "Writing is Immortality" and is inspired by Keats' Ode to A Nightingale:


“But on the viewless wings of Poesy, Though the dull brain perplexes and retarts: Already with thee! Tender is the night, And haply the Queen-Moon is on her throne,”


As with some of my other flash fiction stories this has a Greek Mythology theme: the choice Achilles had to face between a long and happy life, or a short life and eternal immorality. To read other writers responses to these prompts, just pop over to the links page. 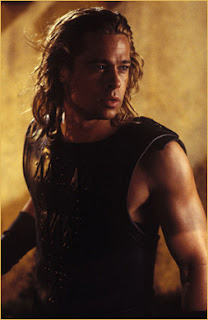 The boy sat in the shadows watching the hero pace.  They were far from the close packed tents now, from the stink of smoke and charred fish and the deathly pall which hung over the camp.   Despite the threat of Troy’s dark walls rising above them, despite the clear white moon which gleamed on Achilles’ gilded helm and rendered him conspicuous to the archers in the citadel, the boy’s hero was fearless.  He always was.  In the red haze of battle, faced with a raging bull or the wrath of Agamemnon, leader of all the Greeks, Achilles’ bright courage shone like a beacon.  He was a God made mortal, golden and glorious.  He was everything that twist-footed Xander was not.  There would never be another like him.

And that was why, although the night pressed close and dark and the silence swelled around them, suffocating and still, Xander was safe.  Achilles would protect him.  He was invincible.

At the river bank Achilles stopped and knelt down, trailing his broad hand in the cool water.  The ripples broke its polished surface, scattering the reflected moon into crystal fragments.   “Child,” a voice whispered on the warm, night breeze. “My child.”

Xander froze, his arms wrapping tightly around him.  He could see no one.  It was magic at work, or the gods.

Fearless Achilles, bravest of the Achaeans, lifted off his crested helm and laid it by the water.  “Mother,” he said.

The boy’s breath stilled in his throat as realised upon whom he spied.   Thetis, the silver-footed had summoned her golden son.

A pale bird glided across the surface of the water and before the boy’s round eyes she was transformed into a woman, white-armed and silken haired.  The scent of ambrosia perfumed the air, intoxicating. Her eyes were dark, shadowed midnight.   Laying her hand on her son’s shining hair, she bowed her head.   “You have chosen then?”

“I made my choice when I came to Troy,” he said.

“You can always turn back, beloved.   Return to the land of your father, live a long life.”   Even to the boy’s ears, her voice had the rough cadence of mourning.  Whatever choice her son had made was to bring her sorrow.   Fear gripped him, tightening around his fast beating heart.

Achilles raised his head, wrapped his arms around her slender waist.  “Mother, I cannot.”

“You choose the immortality of a glorious death,” she said.  “You could find it another way.”

He shook his head, releasing her.  “You know I cannot.”

“Then this is goodbye, beloved.”   Leaning down, she touched his face as lightly as the dawn, but Xander could see tears shining in her liquid eyes.

“My blessings on you,” she said.  “For you will die tomorrow.”   And she was gone, in a soundless flurry of feathers, a white ghost against the pewter sky.

Xander stood, nausea rolling in his childish stomach.  He clutched his hair, scraped his nails down his cheeks.  Achilles could not die.

The hero looked straight at him, into the fathomless shadows of the trees.  “Boy,” he said.  “You’re Xenophos’ child aren’t you, the lame one?  What business have you here?”

Standing, Xander straightened.  He pulled back his shoulders, lifted his chin.  He would show no fear.  “I came to offer you my service, Lord Achilles.” With hesitant steps, he limped over and knelt at Achilles sandaled feet.

Achilles sighed.  “You heard the prophecy?”

“Then do this one thing, child.  Remember me.  You are too young to soldier, and if the Gods will it, you will survive to see the sacking of Troy.  Remember me.”

He flushed, shame and pride burning him in equal measure. “I am lame, Lord Achilles, but I can scribe."  He gripped his hero's hands.  "I will remember and my children will remember, and my children’s children.  It will be the greatest tale ever told, my lord.  Your glory will echo down the centuries.”

Achilles did not laugh.  When he looked into the boy's thin face, he saw the ferocity of conviction and all doubt lifted from his heart.  He raised his face to the canopy of stars and breathed deeply of the sweet night air.   “Immortality indeed.”
Posted by Meg McNulty

Thank you for this read. The richness of the scene presented was not only challenging to how I should present my own work, but inspiring in that I have imagined such detail and I now have your work as example on how to convey it.

Thank you, that's a lovely compliment!

"I am lame, Lord Achilles, but I can scribe."

Great, great writing! And an even greater reminder that, for the scribe anyway, immortality is not a myth.

Loved this read. Thanks for sharing.

"Whatever choice her son had made was to bring her sorrow." Such a poetic way of expressing the choice to die--particularly for a cause.

This was great, and I love that it is a written work from the perspective of one not part of the legend directly, who then promises to scribe the tale. So there's a bit of Xander's own immortality, eh?

Thanks David and Bryce. I always enjoyed those myths and legends told from the viewpoint of someone who wasn't The Person. Gives more artistic licence!