As I'm playing catch up, I'm posting my #NightGale entries in random order.  To find out more about the contest, see my earlier post. And to see what other people are writing, pop on over to #NightGale originator Stevie McCoy's blog and see where it leads you!
Week 1 was supposed to be posted on 5 January.   Inspired by the Romantic Poets, the prompt is:

This is inspired by a quote from Keats' Ode to a Nightingale:

“That I might drink, and leave the world unseen, And with thee fade away into the forest dim:”

It would be worth it.

Morrigan pressed the thought to her stomach, her palm flat against her cold skin.  The attic was draughty.  Through the tattered thatch she could see splinters of moonlight, brighter than the day.  A full moon.  A moon for magic.

She had loved it up here when she was a child.  The thatch had been thick then, the attic a cosy burrow in which she could curl up, sheltered by thick stone walls and the embroidered eiderdown which had been handed down from her grandmother.  She fancied it had smelled of her.  Dusty, herbal, touched with exotic smoke.   It was as though Nan had wrapped her arms around her, sewn lullabies into the goose-down filling. 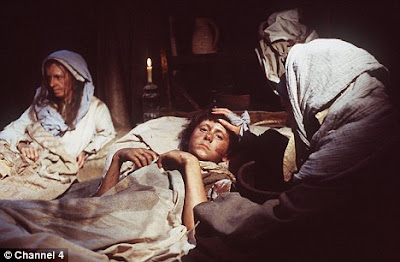 But that was a long time ago.  Before death had come, black and hungry.  It had been Sukie who had gone first.   They found the lumps beneath her little sticklike arms and within twenty four hours she was dead.   Within three days it was half the village.  And then they’d come.  Oh, then they’d come.  As soon as the whispers of plague had begun to swell, the priest had run.  No sacred rites for the dying.  No blessed graves.   She could see the fear in people’s eyes, to die unshriven.  They could smell the hellfire, them with their narrow little minds.

Better not to die.  Better to risk a witch’s cure.

Months of isolation, of pointed fingers and sly glances were forgotten.  They needed Nan now, wanted her remedies.  God had shrugged and turned away and they’d take anything.  Even the Devil’s magic.  Even that.

But it was too late.  Morrigan knew that as soon as she’d gotten up.  She saw the beads of sweat on Nan’s brow and she knew.   All that wisdom, gone.  She saw the anger in their eyes, the desperation.  They'd been ready to risk damnation to save their babies and Nan couldn't help them.

Nan had sowed the seeds in her head, told her tales of enchantment.  She knew how to brew a love potion, how to make a rub that would cure a fevered child.   It was in her blood, that’s what Nan had always said.   Their family had always been wise women, back through the generations.   Ancestral wisdom was what it was.

It wasn't enough to turn back the plague.  She couldn't save the sick babies any more than she could save Sukie.  She saw the anger in their eyes and knew she needed help. She needed the knowledge of the women who'd gone before.  The wise women.  Her Nan.

And there was a way to reach those women.  She knew there was.  Remembered the rhyme, moonlight, hemlock, stems of chives, drink it down to reach past life.  “If they ever come for you, Morrie, you drink it.  You’ll be with us then, have all our powers wrapped around you.   You'll be with us and we'll be with you and they won't be able to hurt you.  It's better that way.”

They were coming.  The ragged remnants of what had been Little Poddington.  Gaunt, sad-eyed and angry.  They needed a reason for the destruction, a reason why no children play in the lane and their loved ones lay, piled six deep in unmarked graves.

God had chosen them to be punished and why? Because they had suffered a witch to live and it had brought the curse of plague down on them.  The village would be cleansed.  The plague would go.

She heard the door crack downstairs, loud voices echo in the yard.  Not long now.  With trembling hands, she raised the rough earthenware cup to the moon and spoke the words.

And then she drank.

Wow, I love that sort of hedge-witchery and then the religious intolerance displayed by the village rarely fails to raise my ire. So strong emotional responses all around.

I love how the cowardice of the priest contrasts with the calm of the wise women, and yet it's the wise women who ultimately are blamed.

"A moon for magic." set the scene nicely and was my favorite line. Really speaks volumes about the change about to come--without actually revealing just yet the direction the story will go.