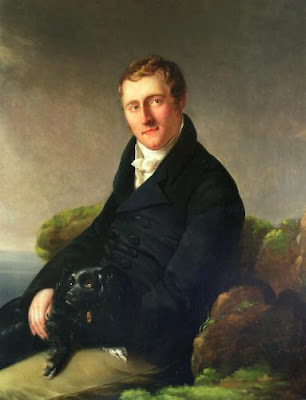 My recent NaNoWriMo effort, Boundless as the Sea, is set in Paris of 1816. As mentioned in my previous post, this posed me with endless questions that required authentic answers.

Thankfully, due to the awesome cornucopia that is Google Books, I found a huge swathe of primary source material at my finger tips. For free. For NOTHING. Here are some of the best (click on the title to read book):

A new picture of Paris; or, The stranger's guide to the French metropolis By Edward Planta (1827)

This book is the 19th century equivalent of the Rough Guide to Paris. It covers everything. Currency, travel, accommodation... it was reprinted many times, with each edition expanded. It's a time capsule for the English traveller to 19th century Paris.

At the furnished hotels ('hotelsgarnisJ, near the Palais Royal, the most splendid apartments may be hired; but at others, in the quarter of the university, and in the suburbs, the accommodation is more simple and less expensive. L'Hotel d'Angleterie, Rue des filles St. Thomas; L'Hotel du Prince de Galles, Rue du Faubourg St. Honore; and L'Hotel de Boston, Rue Vivienne, are commodious and reasonable.

"Wood is universally burnt in Paris, and few even of the most elegant apartments are furnished with the luxury of a carpet." 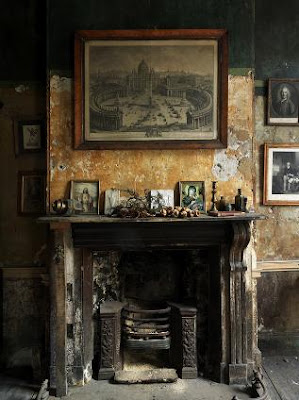 A visit to Paris in 1814: being a review of the moral, political, intellectual and social condition of the French Capital By John Scott
Extract:

The crowds of the Palais Royal are thus formed, and it puts on its air of bustling dissipation, and lounging sensuality, at an early hour of the morning. The chairs that are placed out under the trees, are to be hired, with a newspaper, for a couple of sous a piece — they are soon occupied. The crowd of sitters and standers gradually increases, the buzz of conversation swells to a noise, the cafes fill, the piazzas become crowded, the place assumes the look of intense and earnest avocation,—yet the whirl and the rush are of those who float and drift in the vortex of pleasure, dissipation, and vice. The shops of the Palais Royal are brilliant: they are all devoted to toys, ornaments, or luxuries of some sort. 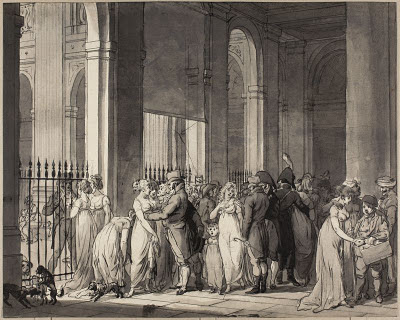 Paris as it was and as it is: or, A sketch of the French capital illustrative of the event of the French Revolution by Francis Blagdon (1801-1802)

...there is not, at the present day, one tenth part of the number of carriages which were in use here in 1789-90.... However, if private equipages are scarce, thence ensues more than one advantage; the public are indemnified by an increased number of good hackney coaches, chariots, and cabriolets... 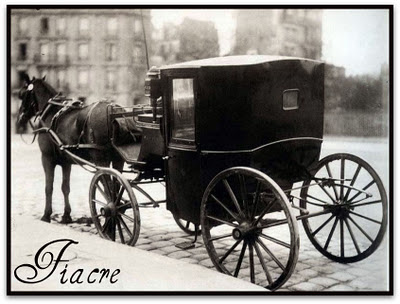 The Rue Vivienne is the sanctuary of fashion ; a visit to the first-rate vutrclumdes des modes and to the mop asms de nouvcautes is one of the most inviolable laws of the petites-waitresses of tbe Chaussie d'Antin, who by an extraordinary freak of chance meet at the hour of their visit to these temples of supreme ban ton which etiquette has fixed at 3 or 4 o'clock, with young elegants of their acquaintance whose taste they consult in tbe choice of their purchases. 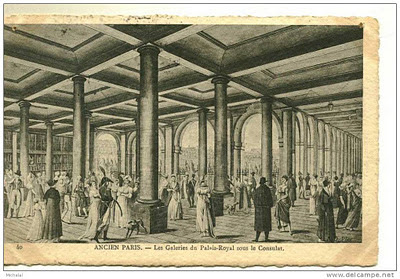 ...we engaged two inside places in the Paris diligence, which sets out every morning and evening from the Golden-Cross, CharingCross. The proprietors engage to provide a conveyance from London to Paris (the passage across the channel included) for 4l. 13s.; luggage above fifteen pounds weight, is charged at the rate of threepence per pound, and each passenger pays the port-duties, and every other incidental expence upon the road. 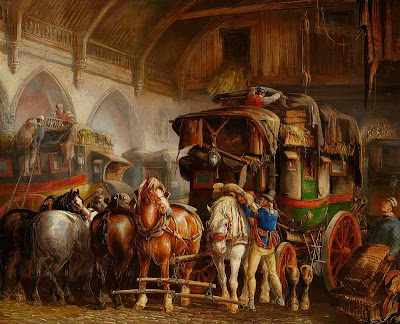 Oh gosh, I love reading your research notes here. And isn't Google books amazing? Half of the sources I'm using for my thesis come from the free digitized collection of etiquette books that Google has. I may write a mini-shoutout to them in the acknowledgements of the finished product, lol.

You really do have a veritable cornucopia of sources here. I am going to have to do some digging of my own to see what I can produce for my steampunk tale. :D

I know! I'm blown away by the idea that I can read the same periodicals my ancestors could have read (though actually, likely my regency ancestors couldn't read) just by downloading them onto my kindle. La Belle Assemblee etc - fabulous! What's the title of your dissertation?

Agh, I've been away too long. Should have known when you commented on one of my Divine Hell entries that you were participating too.

That's some amazing research you've done for your novel there. I'm definitely going to have to get a copy when it becomes available (and get one for my mom too, she loves France and historical fiction which sounds like your NaNo one would be perfect for both).

Ha! In my 1819 Regency, my hero travels to Paris to chase the heroine. Started researching hotels and landed on your site through Google Images! Love the tidbits you've discussed here. I'd already decided to put him in the Hotel de Boston (he hates all things French).

This is great. Thanks!