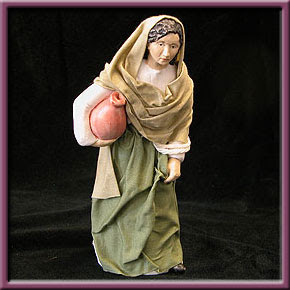 This post is inspired by two stubborn, independent women who I love very much: my mum (age 77) and my daughter. My daughter is four. This week she had her first ever nativity play in she played the role of the Inn Keeper's wife. This was not without controversy. My baby had been convinced she was going to be Mary. No, she had been told she was going to be Mary. But the rehearsals had taken place whilst she was not there and on the Big Day she was the Inn Keeper's wife.

Later, I was recounting this to my Mum. "Funny," she said. "I was just talking about this with my sister today. I was wondering who delivered the baby? They never talk about that, do they? I mean, she didn't have any women with her. It must have been the Inn Keeper's wife."

Faced with choruses of angels and gifts of gold, frankincense and myrrh, Mary's birth experience does tend to be rather glossed over. Well no longer. This flash fiction is for all women who have given birth - and more than anyone, for the Inn Keeper's wife. 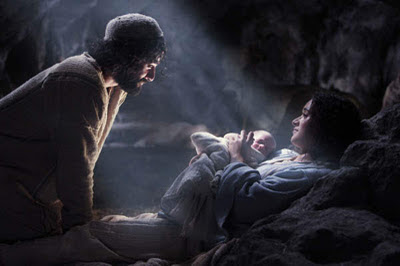 I had always liked the smell of the stables, the dusty sweet smell of fresh straw, and the warm bodies of the cows. It was my favourite part of the day, that pre-dawn hour when I crept out of the inn and fumbled in the darkness to milk the cow. It was a time of rich, velvety silence, bar the soft shuffles and lowing of the cows, a time for thoughts and prayers, a time to reckon up the accounts and then dream of the fields of my childhood, before I wed Jacob and the Inn.

Just before dawn it was my place, the stable. Not at night when the Jacob bustled about, helping travellers and brushing down hard-mouthed, over laden mules. Not when the stables were crowded with people shucking off their burdens and rinsing the dust from their feet.

I didn’t want to share it, not really. If she hadn’t looked so tired, if he hadn’t looked so worried. I remember that time myself. Feeling sore and huge, ankles swollen in the heat and face puffy, the baby weighing like a rock between your legs, ready to drop. No maternal exhilaration at that stage. No delicate flush of anticipation. Just heaviness and fatigue, aching hips and sore feet. I couldn’t turn her away, not in that state. So I let them rest, just for the night. Not in the rooms; Jacob was clear on that.  The rooms were for them that had money, had booked. Not for stray couples in threadbare cloaks with barely coin between them.

It was sometime in the night that I heard her cry, the gut-deep wail that told me her time had come. Jacob stirred, turning over, pummeling the straw-stuffed pillow beneath his head. I sat up. Listened.

No woman should have her time alone.

Wrapping my cloak around me, I inched my way through the dark rooms. I could hear the heavy breathing of wine-soaked men, the rustling of the hens.

She was in the darkness on her hands and knees. Moonlight streamed through the stable door, painting a stark portrait in black and silver. I could see her tunic was soaked with blood. Her husband knelt beside her, hands on her back. I could see his lips move, in prayer. Prayer! When what she needed was water.  Hissing, I shooed him away and knelt beside her, feeling for the baby’s head.

“It’s soon,” I whispered. “Your babe will be here soon.”
Posted by Meg McNulty

"Mary's birth experience does tend to be rather glossed over"

I assumed that was because if it was accepted that

(a) the Virgin Mary was the result of the immaculate conception and
(b) there was a general belief that pain in childbirth was a direct consequence of Eve's sinfulness then
(c) Mary would give birth without any pain.

And now that I've checked, here's what the Catholic Encyclopedia has to say about the matter:

After bringing forth her Son, Mary "wrapped Him up in swaddling clothes, and laid Him in a manger" (Luke 2:7), a sign that she did not suffer from the pain and weakness of childbirth. This inference agrees with the teaching of some of the principal Fathers and theologians: St. Ambrose, St. Gregory of Nyssa, St. John Damascene, the author of Christus patiens, St. Thomas, etc. It was not becoming that the mother of God should be subject to the punishment pronounced in Genesis 3:16, against Eve and her sinful daughters.

You were pretty much spot on then! I guess I'm allowing myself to retell things in a less than orthodox way - though it would be nice to think that after the donkey and being turned away at the inns experience, that the childbirth would at least be a breeze!

Which is probably why you can write fiction and I can't. I just don't have the necessary kind of imagination for it.

And we're all glad you do what you do! Your book is on my Christmas amazon/kindle list. Happy days!