I'm playing catch up! Still suffering from my pseudo consumption (Balzac eat your heart out) and lurking in London, I completely missed the start of fabulous Lady Antimony's exciting Dante-inspired December flash fiction challenge. But better late than never sayeth I.

So here you go. Inspired by Limbo, the first ring of hell is my 150 word piece: 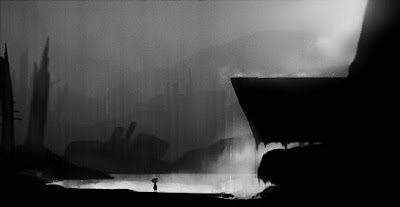 The ground is rough now, thick with wild grass. No crosses, no mounds. I kneel down and spread my hands upon the dew-soaked ground. It feels wet against my hot palms, as though the earth is weeping. Is this the place? Oh God, is it?

Panic. Fist clenched, I thrust my hand against my belly. I want to crunch it, crush it. My eyes close. Gone. She’s gone. I can’t find her, even here. She’s lost, floating. Unsanctified.

They say fairies come to this place, dance across the unmarked graves. I wish she was a fairy, my Bridgeen. She looked like that. Pointed chin, silvery pale. A wee angel. No, not an angel, she’ll never be that.

She was so light in my arms, barely there at all. Such a fragile babe. They took her from me almost at once, still bloodied from my womb. Took her to Limbo.

My story is inspired by the cillín - the unconsecrated infant burial grounds. Years ago I went to a heartbreaking exhibition about the cillín which highlighted the distress and folklore around the places where unbaptized babies were buried. It's hard to imagine what it must have been like for the mothers of those babies, the double grief of losing that child and then believing they would never see it again in the afterlife.

My mum is a catholic and this was a very real fear for her, the idea that child lost in miscarriage would never go to heaven. The Catholic Church as now changed its ruling on Limbo, but generations of catholics had to live with the distressing concept that their stillborn infant would rest forever in Limbo.

Seamus Heaney wrote an amazing poem on the subject which haunts me still. You can read it here.
Posted by Meg McNulty

Beautifully haunting, my dear. My 3rd grade teacher was old-school Irish Catholic, and had us pray for the souls in limbo constantly (I went to a Catholic elementary school). I've forgotten how badly limbo frightened me as a child.

I love the history entwined in your peice, then again that's what I love about most of your writing. Don't forget I'll be waiting for my invitation on your beta reading of the nano romance :-)

@Lena - I still find it terribly sad, and even more so that it can be cancelled. There can be endless apologies, but it will never make up for all that heartache. The Heaney poem is great, if you get chance to take a look.

@Stevie thank you! I've just got back onto my historical romance - it's been crawling along a bit since the end of Nanowrimo. I'm 3/5 through - some more to go! You're welcome to read a sample chapter (maybe I could use that site?!)

That is haunting, that was always one of my biggest beefs with Catholicism and like religions was their willingness to damn new/still-borns who died before there was even opportunity to baptize them.

I also love the history of your pieces, adds so much depth to them. And let me know if you do put anything up on Book Country or otherwise available though, because I want to read it.

@David - I sure will. I haven't quite got to grips with book country. Still makes me sad my mum was so sad about the thought of a miscarried child being in limbo. Such a cold idea.