Still catching up, I've only just made it to heresy, which all of Lady Antimony's writerly heretics nailed yesterday. For background to this #divinehell December flash fiction challenge, check out the rules Lady Antimony's blog. 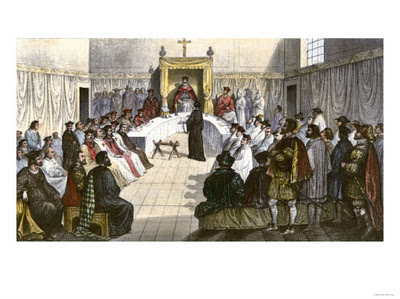 The room was heavy with silence, tomb-cold. He could be quiet though, he was good at that; a child of the shadows, creeping and watching. Winter sunlight kissed the worn tiles of the chamber, lit the stark faces of the tribune. Hungry, the boy thought. They look like they want to eat her.

Faded tapestries hung on the walls. Funny faces, saints had. Two black holes and a line for a mouth.

The inquisitor stood. “Tell us what you see.”

The woman looked up, thin-faced, wide-eyed. “He comes at night and his breath is sweet, so sweet.” Her eyes filled with tears and she held out her hands, red-stained. Bloody holes. “He loves me. He says he loves me.”

He saw them shift in their seats, murmuring. It was like excitement, the boy thought. Like a party. A party for maman. 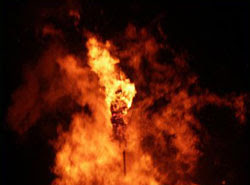 "Anyone who attempts to construe a personal view of God which conflicts with Church dogma must be burned without pity."
- Pope Innocent III

There were a number of inquisitions over the centuries, possibly the most famous being the Spanish inquisition in which 3000 - 5000 people are estimated to have been put to death for the crime of heresy. Today the inquisitions are generally viewed as dark periods in the history of the Church. For the sake of balance, here's one view: The Horrors of the Church and its Holy Inquisition and another: Inquisition from the Catholic Encyclopedia.

What it undoubtedly true was that many men, women and children were tortured and died as a consequence of the Church's zeal for hunting out heretics. Families were torn apart and children of the accused suffered greatly and were sometimes accused themselves.

This story is inspired by the witch-hunts that followed two papal bulls, Summis desiderantes affectibus and the notorious Malleus Maleficarum or "Hammer of the Witches".

Omnia per carnalem concupiscentiam, quae quia in eis est insatiabilis - All [Witchcraft] comes from carnal lust, which is in women insatiable.

Loved getting this inquisition from the POV of the child of the accused... I wish I had more ways to say how much I love the history you put into your pieces--really amazing.

Love the Malleus Maleficarum quote at the end too--may have to find my own application for that... Actually, it sorta works for my Divine Hell story too.

I had a whole story spring to life in my head after writing this. SUCH an interesting period!

I could feel the hunger in their gaze. Great writing :).