To BANG or whisper - what makes a good first line? 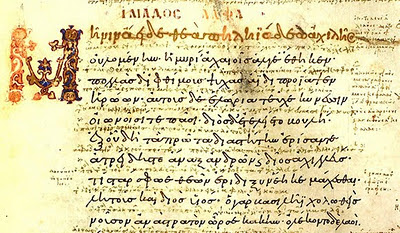 One more than one occasion I have been known to claim that the best first line of all time belongs to Homer's Iliad. I firmly believe that it does. There's something about Homer's words which sound like a cymbal in my head and capture something of the glory and tragedy of what is to follow.

All in one line.

But of course, I haven't studied ancient Greek for years. I'm talking about the Iliad in translation and that means that the first line in question belongs not only to Homer, but whoever interpreted his words to bring them to us.

How on earth do you go about translation? Do you focus on conveying the words literally, or on capturing what you believe to be the essence, the emotional flavour? How do you capture the rhythm and structure of poetry? What is compromised in order to get your readers the best possible understanding of what is happening there? For a really great perspective on that have a listen to Peter Meineck's superb lectures on Greek Tragedy.

I don't think there is a single right answer. You just have to go for the version which strikes a chord with you. And there is lots of them to choose from, which gives us a great excuse to consider what makes a good first line! 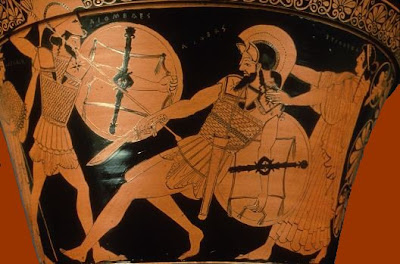 The Wrath of Peleus' Son, the direful Spring
Of all the Grecian Woes, O Goddess, sing!

Sing, goddess, the anger of Peleus’ son Achilleus
and its devastation, which put pains thousandfold upon the Achaians...

Anger be now your song, immortal one,
Akhilleus’ anger, doomed and ruinous... 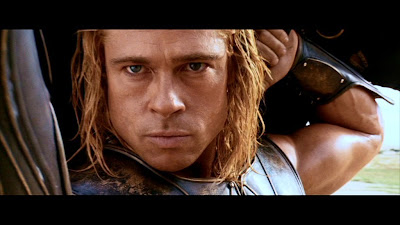 Which ones jump out at you? Which make you sit up in your seat and hear the clarion sound of swords crashing against shields? Which make tears choke in your throat, feel the poignancy of the moment? Which make you want to read on?

I grew up on Richmond Lattimore's fairly literal translation and I love it. I love the note that "Sing" strikes, clear as a bell. I love the rhythm of the words which follow. Lattimore was a poet as well as a translator. I think that comes across in the way his words flow across each line.

But I am also attracted to Stanley Lombardo's translation. The guttural roar of RAGE which is pulled up, a line above the rest. It dominates like a battle cry, interrupted by 'Sing, Goddess..." Lombardo designed his translations to be delivered orally. He writes in a vernacular style, which brings you close to the action.

The other versions don't do it for me in quite the same way.

Let's take Fagles for example. He starts with "Rage" but goes straight into "Goddess, sing".

Why doesn't that work for me?
It's because word order underscores what is important. "Rage - Goddess, sing" places the Goddess above the song in the hierarchy. But to me the song is what is significant. One of Homer's important themes is about the price people pay to become immortal, to become part of a song. The Goddess is secondary. She is the vehicle of the song and thus should be coupled to it, but always placed behind it, as in Lattimore's version "Sing, Goddess".

Fitzgerald lacks oomph for a different reason: word choice. "Anger" is not as powerful a word as RAGE or WRATH. It doesn't stomp its foot or bellow. It's more moderate. If the angry word is to be your opening gambit, it needs to be the strongest angry word you can find.

Word choice and word order are what strikes Jordan off my list two. He places Peleus above anger in his first line ordering and his word choice generally errs on the side of moderation.

Rage and the Song are what it's all about. That's where the drama is for me. I want them up front, slapped in my face. I want to be plunged right into that. I want immediacy.

The lack of immediacy is what puts me off the older translation by Pope - why start with 'The' when you can plunge right into to 'Wrath'?

I do however have a sneaking affection for Chapman. There is something about "Achilles’ bane full wrath resound," which is so very grand. But his text is denser than the text of Lombardo and Lattimore and harder to access. 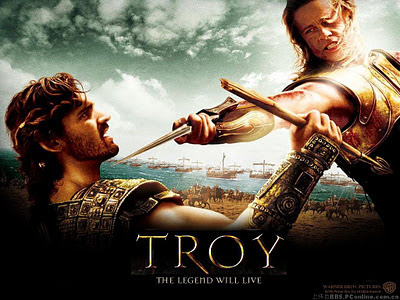 So what then can I conclude about first lines from this?

I think the main point is that everything counts. In poetry that is a given: the structure of a line, its relationship to the body of a poem, every word choice is spare and defined.

But it counts in prose too. To think about that for a novel of 90,000 words is intimidating. Its most likely what got James Joyce in a pickle when hunched over his writing desk. But it's also what makes a novel rich, individual and meaningful. It's craftsmanship at its finest. It's why writing is hard and why it is rewarding. It's worth learning those lessons from poetry.

Flash Fiction is a GREAT discipline for focusing down on this. I recently judged the Tuesday Tales flash fiction contest over on the Glitter Word Blog and my top picks all had that winning combination: structure, word choice, rhythm.

In summary, my golden rules for a good first line:
1. It captures the distilled essence of a story
2. Its word order and sentence structure underscore key words
3. Its word choices are strong and appropriate

If you want to explore this more, here are some links...

How crafty word order can instantly improve our writing

Great fantastic article, Meg, and oddly enough something I have often thought about. I was a Greek scholar in college and now write YA novels about the Oracle of Delphi in Greece 480 BCE. So, I've given a lot of thought to the fact that Homer started The Iliad with "Wrath." It's like he asked his harpist to strum one deep chord on his harp and let it vibrate for the entire epic. I love it. And there isn't a book I've written yet where I didn't stop to think: What is my "wrath?"
So thanks for writing so close to my heart.

"It's like he asked his harpist to strum one deep chord on his harp and let it vibrate for the entire epic" - I LOVE this idea. It's exactly the way I imagine it too! Your books sound marvellous - I love the thought of focusing on the Oracle at Delphi - would love to know more.