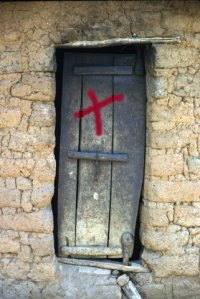 This has NOT been a good month for blogging.

I've been struck by the plague. For two solid weeks I've been coughing up some sort of ectoplasmic substance worthy of an Exorcist remake whilst looking like the vanguard of the zombie apocalypse. Any day now someone is going to dash a red cross on the front door and wall me in.

It's a lowering thought to realise just how crap an old person I will make. I don't deal with illness in a dignified manner. I rage at it. I charge on through, downing lemsip and REFUSING to let it take me down.

Until the ectoplasm kicks in and I crumple on the sofa in a fit of coughing and finally, finally ring in sick, fretting all the time about the work that will mount up and feeling, frankly, extremely sorry for myself.

Of course, you're never ill in isolation. My little girl and I sound like a baritone version of a particularly poorly frog chorus. Cough, Cough, Cough AYAYYYYA. And my husband has taken to his bed, feeling wretched.

If there's one thing worse than illness, it's COMPETITIVE illness. Clearly we both believe ourselves to be iller than the other. I have the galloping consumption, he has man flu. Or not. 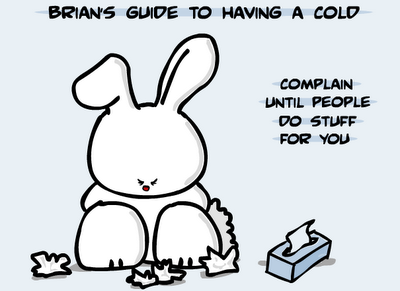 There is nothing like a nasty cold to leave you wishing for a mum to bring you tea, toast and cosy sofa blanket. You deserve those black and white films. You deserve that bottle of lucozade. You deserve being waited on hand and foot.

Unfortunately when you ARE the mum it just doesn't work out that way. And if I can't ENJOY being ill, I don't want to be ill.

Instead I feel like I'm operating with half a brain. 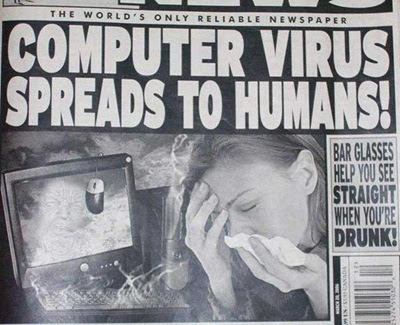 And to add insult to injury my beloved netbook, which appears to be symbiotically linked to my immune system, is DOWN. It's buggy. It's spitting out win32 errors. It's refusing to let me access my control panel. It's losing it's internet connection. The poor baby is stuffed.

Well BOO to that.


I'm nailing it. I've taken the time off work. I've made a doctor's appointment. And I've got some bad ass antivirus software. For me, for him and for my netbook.

Or a lemsip, whatever.

But I have written nearly 20,000 words of my new story. Not bad for half a brain.
Posted by Meg McNulty

Aw poor thing. I hope the doctor gives you something. (if you are coughing up green yucky stuff tell them and they'll give you antibiotics.)

And lo, the doctor hath given the gift of amoxicillin after looking alarmed and testing me for pneumonia (which I don't have). My career as a victorian consumptive is thus brought to an abrupt halt.