I'm fascinated by them both and by the relationship between them. What must it have been like for Clytemnestra growing up with a sister who was the most beautiful woman in the world? What must it have been like for Helen to abandon her child, hoping or dreading that she would be given into her sister's care? They were born from the same egg, twins but forever marked for different paths.

We know only fragments of their stories. Greek Mythology paints a picture of women as a threat to be subjugated, or as a trophy to be won. I feel like they deserve their own story. 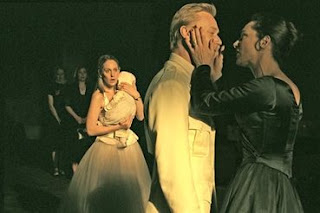 At the sound of my voice, Agamemnon turns, chest plate hanging half-fastened from his broad chest, its bronze gleaming in the firelight. His dark gaze slides past mine, meeting the shadows behind me.

He shrugs, returning to the leather ties that bind the bronze to his massive ribs. “You knew the call had come.”

“You’re going after Helen.” My voice is flat, granite hard, but my hands tremble. I shroud them in the long folds of my tunic. “You have heard the prophecy. There will be no fair wind from Aulis. The Trojans are protected by the gods.”

Black and furious, Agamemnon’s rage is a sudden storm. My head snaps back, the red mark of his hand livid across my pale cheek. I stumble, clutching for the wall as nausea overwhelms me and I retch.

“That puppy broke the sacred law of Zeus himself. Do you think the Son of Kronos will protect him in his hubris?” His roar is a flood, drowning any opposition. The stone walls amplify his fury, its thunder echoes around me.

I taste blood in my mouth, smell the lingering leathery stench of his fist. Closing my eyes, I force myself to breathe slowly and steadily, even as crimson anger blossoms in my bone-white cheeks. I straighten, bracing myself against the familiar roughness of cold stone.

“This is a holy war?” He hears the edge of acid in my voice and his face darkens. I see the curse of the House of Atreus in his mottled cheeks and the bunched muscles of his jaw.

“The fields of Ilium are rich,” I raise my face to meet his black stare. My bound hair has tumbled across my purpling cheek, a mantle for my shame. “But still there is no wind.”

He turns his back to me, wide-ruling Agamemnon, and fastens the final loop of his battle armour. “There will be a fair wind.”

“How?” Foreboding chills my veins, a blood-scented prescience that clenches my womb and paralyses my limbs.

Raising his head, he glances at me. “There must be a sacrifice. A great sacrifice.” I am silent. My tongue is bound to my mouth, thick and stupid. “In honour of the Gods and in honour of our daughter’s wedding,” he says. He looks away.

“Wedding?” The word is a tattered gasp, a desperate flutter in the stillness of the room. I think of my bright-haired Iphigenia teetering on the brink of womanhood with the ungainly vulnerability of a newborn foal.

“A splendid match,” Agamemnon says. He reaches out to grasp the long shaft of his spear and I see the lie in his white knuckled fist and the brazen jut of his bearded jaw. He does not look at me. “To Achilles, who is like to the Gods.”

I am a block of salt and ice, my movements stiff with horror. I stare at him, the Son of Atreus, and see the grim line of his mouth and the scarred hands which took the life of my husband Tantalus and carried me to royal Mycenae. I think of my firstborn infant, the sweet milk scent of her smooth skin and the hard tug of her mouth against my swollen breasts. His child, the seed he planted in me. His child, but my child too.

“I beg you,” I say. “No.” I fall to my knees on the hard stone floor, and clutch his foot in supplication. A shudder runs through him, and I see his fists clench. He shakes my hand away.

“Prepare her,” he says, looking down at me. He lifts his crested helmet from the narrow bed and lifts it onto his head. It masks his face, makes distant shadows of his burning eyes. He is wide-ruling Agamemnon, Lord of all the Achaeans. He rules by sacrifice.

I am blinded by darkness. All I can taste is blood. 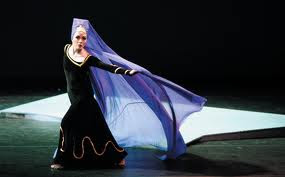 Wow, I appreciate the time you spent with Clytemnestra this week, because I didn't know her story before.
It really is tragic, and as always you bring it alive with your words. Interesting to again get the mother's breast imagery as we did with her twin, Helen, so recently. Perhaps because I'm reading them in the same night, and read Helen first, this one has less impact to me.
On the other hand, "Prepare her" is such a heartless thing for a father to say to a mother about their daughter in this context it sends chills down my spine.

I think what I'm finding interesting is comparing and contrasting their attitudes to motherhood. One of the exciting things about myth is that it gets reinvented by and for each generation. Because I am a mother, the angle of how motherhood fitted with being a divine pawn or a ruler etc and the choices and justifications that might have forced is kind of interesting. The idea with these two stories is they take place at broadly the same time - start of the Trojan war - and both women lose a child, for different reasons. Good to know they don't work when cheek by jowl though, that will help a lot!

This is wonderful, and I'm so glad that you're looking at Clytemnestra. I read "Agamemnon" in college, and I always felt sorry for Clytemnestra, a woman who was clearly intelligent and deeply bitter over the sacrifice of her daughter.

You've done some great things with this piece. In particularly, I really like the use of first person and present tense. It makes the intensity of the rage and violence in Agamemnon all the more vivid.

Thanks so much Lena - I've tried writing it in the past and present and I find the present tense gives it an immediacy for me. I didn't want any distant reflectiveness, I wanted it quite raw.