You Will Never be a Centaur (or will you?) 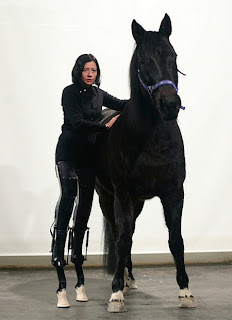 This week the marvelous world of Twitter brought me this rather fabulous story from the Geekologie website, about a French artist injecting herself with horse plasma because... why? I'm sure she had her reasons.

The story captured my imagination and I was not alone. The talented Ms Michelle Franklin, prolific author of the long-running Haanta fantasy series was similarly struck. So I proposed a challenge. We both write a short story inspired by the adventurous and slightly equine Ms Laval-Jeantet. Michelle's story fits within the Haanta Universe and concerns a gentle, magical hind. Mine, naturally, belongs to the realm of Sisyphus, which is transmuting into a futuristic sci-fi/Greek mythology mash up. Yeay.

Make sure you read Michelle's heartwarming tale - it's the polar opposite to mine! In case you missed the link, you can read A Healed Heart here. 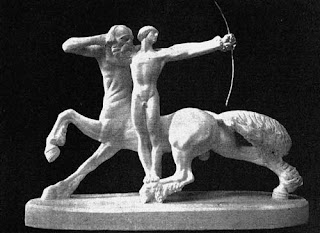 
The blackness was impenetrable. He felt the rough cold of rock against his flat palms and paused, listening.

Nothing. Just the steady drip of water in the depths of the cavern and the smell of decay.

“Well?” Helen whispered behind him. He felt the light touch of her hand on her shoulder and winced, wishing he could shake it away. Even her perfume was a distraction, the heady scent of ambrosia-tinged divinity mingled with the sensuous heart of a rose. He needed to be sharp, needle-witted. Being trailed by a woman so beautiful she launched a ten year war and robbed two dozen heroes of their senses was not conducive to focus.

“Get back,” he hissed. “I can’t think with you hovering over me.”

He felt her withdrawal like a physical pain. Her hateful godhead that drew men like a moth to a flame; divinity and death intertwined within her, like any other goddess. It sickened him.

Then he heard it. A scrape deep within the cave, something hard striking the rock. And a moan, soft and low.

Drawing back his cross bolt he advanced, inching his way through the darkness as sweat beaded his brow and dripped down the musculature of his bare back.

“Chiron,” he whispered. “Chiron are you there, old man?”

The movement stopped. Silence reigned and then a low voice. “Go. Whoever you are, be gone from this place.” The words were hollow, cracked with pain.

“Chiron son of Kronos, I have need of your gift,” Sisyphus called into the black shadows. “I come in peace. Reveal yourself, centaur.”

Light flared around him, brighter than a thousand suns. Sisyphus flung up his arm, holding his cross bolt protectively before him. “Get back!” he shouted over his shoulder, though he knew it would be too late. Helen would be where she chose to be, and damn the consequences.

Glancing from under his arm, he stepped back startled. “What abomination is this?”
The woman standing in the glare of the floodlights was no centaur. She was two legged, bare-breasted and proud, her head tilted back to regard him with gleaming black eyes.
“Where is Chiron?”

“The son of Kronos is no woman’s slave,” Sisyphus said. He circled her, his cross bolt drawn and ready. He jerked his head at the lights. “What is this place?”

“Why should I tell you?” The woman laughed. “Frail human male.” She paused, arrested and inhaled. Turning, she took a step towards him. “There is another with you.”

Sisyphus’ flicked a glance into the depths of the cavern, searching for the gleam of the centaur’s eyes in the darkness beyond the lit interior. “I am alone,” he lied.

The woman rolled her eyes, tossing her long mane of black hair. “I smell her. A woman and not a woman. What is she?”

“Some cave creature of yours no doubt,” Sisyphus’ lips curled in a sneer, enjoying the thought of Helen hearing his words, her ludicrous perfection cracking in annoyance. “A dark sloping creature of no importance, just like you.”

She was arrogant, he could see that. He could read it in the tilt of her chin, the flare of her nostrils. Her arrogance was a gift to him.

“I came for a prophecy,” he said. “An oracle from the centaur Chiron.”

“He has no prophecy,” the woman said, even as she swivelled to look towards the cave mouth, towards Helen. “All he has is mine now. I have drained him of it.”

“You can foresee the future? It is a gift of the gods.”

The woman spread her arms, her face lifted to the lights. “I see yesterday and tomorrow. I am faster than the fleetest stallion, wiser than the stars,” she cried.

“I bow to you,” Sisyphus said politely as Helen’s knife slid silently through the dank air and blood spurted from the woman’s throat. “But I believe you are mistaken.”

Michelle Franklin is a said...

Well done :D The horse-lady, or Mrs McEdicus, would be proud :D

Maybe I should have had Ephiny murdering the centaur-enslaving witch. Yeay for Xena!

Very classy! "I bow to you. But I believe you are mistaken."

I think I am going to absolutely love Sisyphus in your story. Helen is cool and her ambrosia addiction is compelling and she is a richer character than many stories ever have... But Sisyphus may be even better in my opinion.

Loved this one. Sort of wish I'd gotten in on the horse-lady challenge, but at the same time it's probably best to focus on the rest of my writing until September.

You should join in ! Michelle was a couple of days ahead of me in posting hers. It's such a mad story, you sort of have to respond to it somehow!

You should join in ! Michelle was a couple of days ahead of me in posting hers. It's such a mad story, you sort of have to respond to it somehow!

"Her arrogance was a gift to him."

Love that line, it hints that something drastic is about to happen without revealing exactly what.

I think even the woman who dies is interesting, but Sisyphus and Helen win. Although I've only met Sisyphus in this and in the 7 virtues story I can see that he's multi faceted and certainly not a paper person, I love that. Helen too, I want to read more of both.