I'm working on a short story series about Women in Greek Myth. This is Medusa's story. 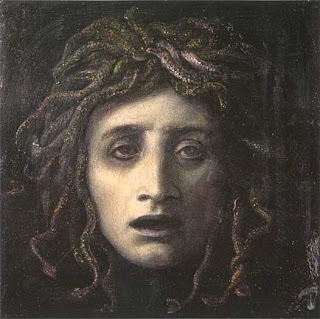 I smell him before I see him. Hot blood, salt tang sweat. Dust stirs beyond the dark pillars. Death has come, as I knew it would. It lies in the shaking hand of a boy hero sent by grey-eyed Athena, the tireless one, the hope of soldiers.

The curse of women.

My life is hers, of course, sworn in blood on her chaste altar. Hers to hold in her pale hand, the daughter of Zeus.

I cupped the flickering flame of her votive candles, bound my potency to her divine service. Until I brought shame. Until Poseidon saw the white twist of my ankles, the fair cheeks beneath my virgin veil. Until he seized and took what was sworn to her, stole my gift away. I still smell his salt, hear the roar of the ocean mingled with my screams.

There is a clatter close by, an overturned urn. His sudden silence is as loud as an echo. Fear. It is palpable, in him, in me. I cover my face, feel the scrape of scales against my cheeks. Snakes hiss in chaotic agitation, coiling around my once smooth shoulders.

This was her punishment, bright-eyed Pallas; her curse on the daughter of Keto, whose virgin blood outraged her untouchable shrine. I am a monster, unclean. Banished to the fringes of Hades, beyond the black river.

Waiting for him, her chosen one.

“Medusa!” His voice vibrates with uncertainty. I see the flash of his burnished shield.

Not again. I will not be used again, my potency subsumed. I am Medusa. I am death to all who I behold. No man will spill my blood again. I open my eyes, stare into the darkness. 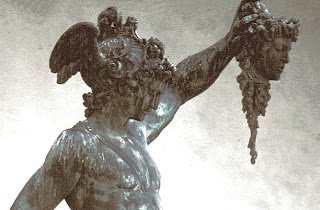 Wow! I absolutely love the line "No man shall spill my blood again." I feel like that so perfectly captures Medusa as you portray her, and it really resonates with me.
As a role-player I get caught up in the idea of medusa as a type of creature, and tend to forget the original on which the generic were modeled.

I've been listening to an amazing lecture series - Classical Mythology: The Greeks by Peter Meineck - and it explores several myths including the myth of Medusa. One of his angles is that in Greek Myth you often see a male taking the potency of a female - which perhaps relates to an earlier matriarchal society (maybe minoan?) being overthrown by a patriarchal society. Medusa is an example - a chthonic creature of darkness and death having her powers removed and utilised by a male - and by a male-orientated goddess (Athena sprang from the head of Zeus, was not born of a mother). I wanted to explore some of that here....

Thank you for sharing this wonderful story.

I've just finished writing a novel based on the myth of Medusa, so I feel like I know her quite well. You have really captured the essence of her tragic tale here with beautiful prose and vivid emotion.

With your permission, I would like to link this page so visitors to my own blog can enjoy it too ;)

I'll be watching your other writing with interest.

I've always had some special affection for Medusa even though we were taught to hate her in literature classes. Thanks for giving her the depth she deserves.

@Matt - please do link away! I had a good look at your site & book concept, looks amazing. I'll be your first reader!

@Chloe thanks so much for your comment - I have an affection for her too. The more you dig into her story, the sadder it is.