On a rainy afternoon aside from getting post-apocalyptic book suggestions, imagining what would happen in a world that had encountered catastrophic climate change (for a book, not because I'm a survivalist) and making flapjack, what else would you do but create MONSTERS?

The jury's out on whether this was more fun for me or for my baba (I suspect for me). But here are the results: 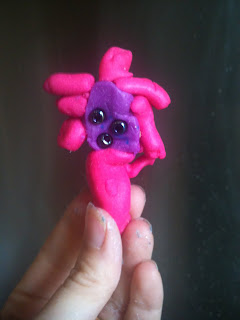 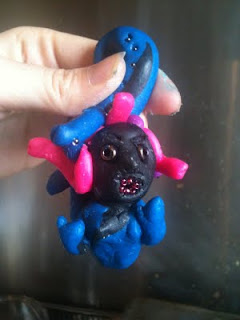 One was made by a 33 year old and the other by a 3 year old (unassisted) and frankly, there isn't much to pick between them.

So, how to model Greek Mythological Monsters?

Tools were:
1. A knife (for cutting and shaping clay)
2. A cocktail stick
3. A pair of hands

Plus a baking tray and domestic oven.

The basis for the blue Medusa was a fat marbled sausage of clay, with a shaped head stuck on top and then various little sausage snakes stuck all over her head. It's necessary to embed the beads in little holes (cocktail stick) or they drop off once its baked.

The basis for the pink Medusa baby was a pink lump of clay, squashed, with beads squashed in and lumps of clay squashed on. It was a remarkably effective technique! 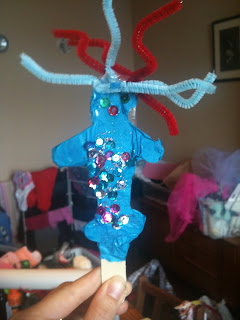 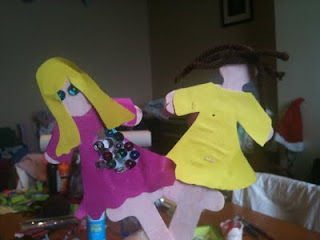 Equipment was:
1. A glue spreader

The process is self evident - I cut up pieces whilst she painted, she glued and stuck (I straightened) and voila, we were ready for a back of the sofa puppet show.

Who needs the Edinburgh Fringe Festival, when there's theatre as good as this at home?

Then we sat down and had a flapjack picnic with our monsters. And it was GOOD.

In fact, it was arguably the best flapjack I've had in years. Making flapjack is nearly as easy as eating it. Nearly.

Melt the treacle, sugar and butter, mix in the dry ingredients, spread in a greased square baking tin and bake for 25 mins at 190 C.

Best scoffed warm and crumbly with a cup of tea. And several monsters. Mmmmm.

A lovely window into your crafts and family life. Makes me miss my childhood. My best crafts always seemed to happen during power-outages in the dead of winter.