And now the end is here.
And so I face the final curtain.

Yes, my friends. Today is the last day of the #7Virtues Blog Challenge instigated by the clever Lady Antimony over on her blog.

Over the last week I’ve brought you a daily dose of Greek Mythology, themed around one of the Heavenly Virtues. If you want to read the rest, just click on Chastity, Temperance, Charity, Diligence, Patience or Kindness.

On this final day, I bring you: 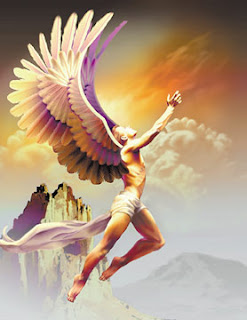 Humility: the Tale of Icarus and Daedalus

The sky is merciless, scorching. Tears sting my eyes. I can hear their terror, the Athenian youngsters sacrificed to the minotaur’s monstrous appetite, smell their blood splashing the narrow stone passageways. Passageways I built, in my cleverness.

I spread my arms, wind stirring my patchwork feathers. “Remember, Icarus,” I whisper. Our wings are wax, the sun is our enemy. Too late I see the proud tilt of his chin, the challenge in his eyes. He soars into the air.

I turn my face away. Had I thought I could make man fly?

I do not see him fall. 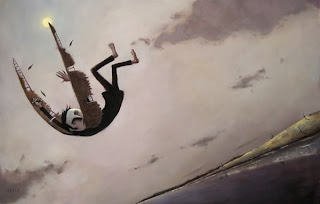 The myth of Icarus and Daedalus is well known. Daedalus (the narrator of this story) was an inventor and was commissioned by King Minos to build a structure to imprison his step-son the Minotaur. Daedalus built the Labyrinth. The story then goes (in some versions) that Daedalus was then shut up in a tower, perhaps to prevent his knowledge of the Labyrinth spreading far and wide. 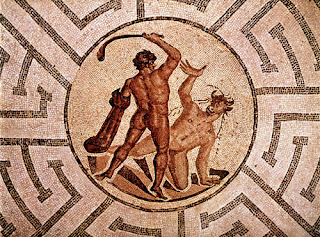 Daedalus and his son escaped by creating wings of wax and feathers. On the verge of leaping from the tower window, Daedalus warned Icarus not to fly too high. In his excitement, Icarus forgot. He flew too close the sun and his wax wings melted, plunging him to his death in the waves. You can read the story in Ovid's Metamorphoses, though Daedalus himself is first mentioned by Homer.

The legends about Daedalus seem to follow a pattern: he comes up with a clever invention which has unforeseen negative consequences (the minotaur's prison becomes its monstrous stronghold, the soaring wings become Icarus' death sentence) and dire consequences ensure, which he bitterly regrets. He is therefore seen as introducing the theme of humility into Greek Myths. 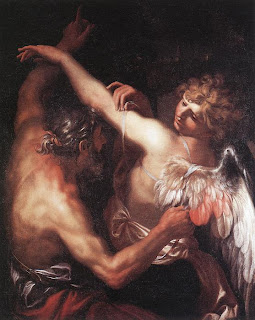 I myself find Icarus all too easy to empathise with - imagine the excitement of being airborne and the thrill of swooping and diving like the birds. It must have been all too tempting to climb higher and higher... an adrenalin rush to a young man who dreams of great deeds. Now I'm a mum, it's Daedalus who resonates most with me - a man desperately trying to keep his child safe from a hazardous world. I'm sure every child seems terrifyingly reckless to his or her parents!


Feast on Heavenly Delights
I’m grieving that the #7Virtues Blog Challenge is over. Not just because I enjoyed writing my stories so much, but also because I loved reading what other people had to say. The Heavenly Virtues have inspired the flash fiction writing community in really diverse ways; from angels to murderers, from fantasy worlds to bus stops, this challenge encompasses them all. Go on a whistlestop tour of the riches the #7Virtues Blog Challenge has to offer and enjoy some truly inspirational bite-size stories. All you need to do is make yourself a cup of tea, pop on over to Lady Antimony's blog and follow the links. Do it – and enjoy!

This was a fantastic ending to your Greek themed virtues!

"Flew too high and burnt the wing..."

I've heard a version where Daedalus and his son got thrown in to the labyrinth for making a wooden ox for King Mino's wife.

I love that you describe the poor youngsters thrown to the Minotaur as well as the doomed flight.

Yes there is 'parent-child relationship' symbolism in the story now that you mention it.

I think the wooden ox was so the Queen could have her wicked way with the Bull that subsequently became the Minotaurs Daddy. Those Greeks eh... they didn't show that bit at Greek Myths for Kids yesterday!

That was it I remeber now, The King had to sacrifice an ox to Poseidon, but he gave the wrong ox because he wanted to keep the pretty one.

The deity got angry and made her wife fall for the ox...
Where did they get their ideas?!

Excellent one for Humility. Icarus didn't have his father's 'advantage' of having already experienced his designs going horribly wrong and so had less caution. Daedalus probably couldn't enjoy the flying sensation with the weight of his last invention flying with him.

A great end to the challenge!

I also love how - for someone with less knowledge of the Greek myths - the end of the story could mean two things: either he falls and the father doesn't see, or he doesn't fall at all.

I love wing/ angelish related stories and myths. This was beautifully done, as always. Reading about your inspiration and historical myths background is quite fun. Thank you again!