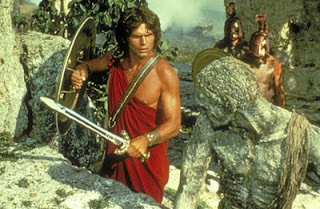 This week has been a GREAT movie viewing week. I've been tucked up on the sofa with my daughter introducing her to the wonders of Jason and the Argonauts, Clash of the Titans (the original) and Sinbad.

Now it's no secret to anyone who knows me that Clash of the Titans has played a defining role in my life. It was due to the dual education provided by the Kingfisher Book of Myths and Legends and the Harry Hamlyn/Ursula Andress Clash of the Titans that I leapt on Classical Civilisations as an A-Level. Whilst studying Euripides, Homer and Virgil, I simultaneously gobbled up Henry Treece, Rosemary Sutcliff and Mary Renault. By the time I got to twenty I was busy finishing a masters dissertation on Euripides' Medea. 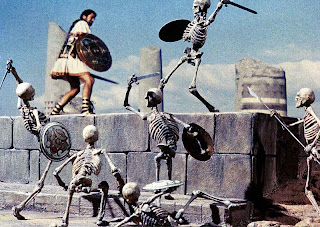 Yep, I love me a bit of Greek mythology.

So where has it all gone? Well, it hasn't gone away. It's all lurking in there somewhere, waiting for an opening. And I want to give it an opening, I really do. I even have an idea. The sizzling spark of a story that is flickering in the damp barbecue of my imagination is about SISYPHUS.

He wasn't a pleasant soul. A wily, unscrupulous bastard who tricked the gods not once, but several times. Who managed to hook up with one of the Pleiades and then embarassed her so much with his impious antics, she gave him a kind of celestial divorce and hid her face for all eternity. Who seduced his niece in an effort to dethrone his brother (EW).

But I kind of like him. It takes one hell of an ambitious fella to take on a pantheon and he didn't do too badly. He even tricked death - once at least. Unfortunately that little episode earned him the punishment of pushing a boulder up a hill for all eternity. 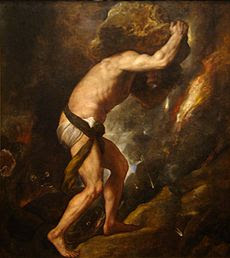 And that's where my spark of a story starts....

The heat was unbearable. He tried to take a breath but his lungs seemed to burst within his rib cage and the air hissed in his throat. He was suffocating. Sweat streamed down his body, making his skin dangerously slick. His muscles burned with strain as he launched himself once more against the massive boulder, his shoulder slipping into the natural dent worn into the rock. His mind blazed with agony; every nerve ending echoing with pain at his effort.

The words danced before his eyes mocking him and he cursed the kernel of hope that had tortured him for millennia.

“Sisyphus.” It was an illusion, it had to be. No one had spoken to him in centuries. He had heard nothing but the cackle of the Furies and the screams of that poor bastard Ixion. Not since Prometheus had gotten out of here. The boulder slipped against his shoulder and he lost ground, his feet scrabbling against the damp earth. Shit. Two inches lost. He swallowed and deliberately blanked his mind. Illusions were a cruelty he didn’t need.

“Sisyphus!” Cool hands touched his back and suddenly the weight was gone and in its place was a void, sweet dark air streaming past his face like the caress of Aphrodite herself. He fell forward onto the slope, his arms spreading like wings against the stony ground. He smelled the mustiness of soil beneath him and memories came rushing back: the fields of Ephyra at harvest time; burying his hands in the tilled fields and praying to Demeter to bless the land.

“Human weakling.” A voice muttered in disapproval. “When you have quite finished lying about, I need to speak to you,” it said more loudly. Something cold and wet pushed at his neck, licking the sweat from his skin. He dimly registered the smell of animal. Dog. Dog meant... Hecate. With excruciating slowness he rolled over onto his back, feeling his muscles snap at the alien motion. He didn’t remember the last time he had lain flat. Was it five thousand years ago? Six thousand? He stared up into eyes of fathomless black and a face of sculpted marble beauty, as remote and unearthly as the moon. Two black dogs sat back on their haunches by her side, tongues lolling incongruously.

“Hecate.” His voice was rusty with disuse. He licked his lips. They were dry and cracked; they had probably been that way for centuries.

Her smile was derisive. “That would be the famed intelligence the legends speak of. I won’t ask you how you are Sisyphus – it is quite obvious.” Her eyes drifted up the hill. “Still not made it to the top with that boulder? For shame.”
He watched her through half-closed eyes. Silence could be a weapon - or at least a defence. She looked down at him. “Nothing to say for yourself? I suppose it’s pleasant to take a break isn’t it?”

No answer. If he answered he might disgrace himself. He might clutch her knees and beg the sarcastic bitch for assistance – and putting himself at the mercy of a Goddess was worse than a death sentence.

Now I just need to find a plot. Any ideas?

Ooh, I like it!! Muchly!! Hmmm, how about, she needs something doing 'up there' and she needs a handy scapegoat if it all goes wrong? Or maybe the entire pantheon needs something doing 'up there' that technically they shouldn't get involved in (an agreement made with someone or other?) and they need a handy scapegoat, but they'll hide behind Hecate. It could be his one shot at getting out of Hades, if he performs as required...

Been done before, I know, but it has a mythological feel to it, and it hasn't been done with Sisyphus. So far as I know, anyway.

You are PSYCHIC! That's exactly what I thought too... my big problem is that I can't think precisely what I want him to be doing up there. I was trying to conceive of what the gods might be worried about e.g. another pantheon getting the edge, some god-killer about to be released... my latest thought was about some sort of mythological monsters trade union (bear with me). They've been pretty poorly treated by their divine masters and random heroes (heads lopped off, eyes stuck on peacock feathers etc). Greek Gods don't tend to give much of a monkeys about mankind, so it has to be something more self-serving.

Mainly I like that idea because I can have the likes of Medusa popping up in Topshop, but then it all gets a bit farcical.

I was thinking of teaming him up with Helen of Troy. Well, why not?

I need a mission for him/them though!

How about this; a new schemer is tricking the gods and they need Sisyphus to out-scheme the schemer before the new-comer gets more for themselves than even Sisyphus ever wanted.
To tie into your monster trade union, maybe the new schemer isn't even human and that's part of what offends the gods the most.
Using Sisyphus was potentially Hecate's idea and maybe not everyone's on board?

Thanks for your suggestions David! Your last one kind of sparked something I think, because I've just realised I've written the Helen scene as a kind of 'goddesses up to something behind Zeus' back' type thing. Not sure where that came from - you, I think!