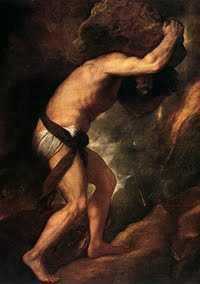 READ ALL ABOUT IT! Launched today: the Sisyphus Diaries. Excerpts from the memoirs of the ancient world's craftiest, wickedest and most impious rogue.


ORIGINS OF THE SISYPHUS DIARIES


I did some bad things in my time. I broke the laws of Xenia, slaughtered a few wealthy guests, seduced my niece and tried once, twice or a thousand times to kick my upstart little brother off the throne of Thessaly. My throne. I married a nymph, betrayed her and tricked her.

But the gods could handle that. No biggie. Until I started straying onto their patch.

It was unfair really. I wasn’t being a bad lad. You might even have called it a kind act. I just told a river god where Zeus had holed up his kidnapped daughter. It wasn’t like the randy old goat didn’t have a half a dozen other maidens stuffed away in caves, fountains and Zeus only knows where else. Would it have really mattered to give just one back?

No good deed goes unpunished, as they say. Zeus didn’t like that, didn’t like that at all. Next thing I know, Thanatos is coming the heavy with me and dragging me down to Tartartus in chains. Shame he wasn’t the sharpest tool in the box. All I had to do was flutter my mortal eyelashes and ask big ole Thannie how those nasty looking chains worked and hey presto! The God of Death is chained and yours truly is free as a bird. Shame. For him.

Unfortunately, that got me in the crap with Ares. No God of Death: no one dying. The God of War’s battles were ditchwater dull. And Ares didn’t like dull. So the shithead freed Thanatos and turned me over to him. Goodbye King Sisyphus, hello death.

I was onto that though. I told the wife to throw my body into the square and she did. Alright, Merope might have smiled to see me bloody and disfigured but we won’t dwell on that. The point is, soft-hearted Persephone bought my sob story about being dishonoured and let me back up to give my errant wife a row. I was free again.

But not for long.

This time it was Hermes who dragged me down below. It’s fair to say the gods don’t much like humans who challenge their authority. Next thing I knew I had my shoulder to a boulder and that was it. Hard labour for the next three millennia.

Until Hecate came with an offer… but that’s another story.

It’s been over three millennia since my adventures started and no bard has picked up the story. Blind Homer passed me over with barely a reference, Euripides, Sophocles, Aeschylus - not a glance.

Like I say, if you want something done - you got to do it yourself.

These are my memoirs. I got a little bit of help from this lady, but you know, she’s just channelling my muse and all that. Pay no attention to her.


Okay, okay, so I've been writing a bit about character journaling, using flash fiction to get to know my characters and to develop their narrative voice. The Sisyphus Diaries is about doing just that. Getting to know the main man, finding out his insecurities, his obsessions, his fears and his triumphs; working out his history, his fans and his enemies. All that and then some.

Plus it's a blast to write and makes me polish up on my classics. Roll out the OCD (Oxford Classical Dictionary, not Obsessive Compulsive Disorder) and let the mythological mayhem commence! Don't forget to pop by to have a read about Sisyphus gaining Ephyra, seducing Tyro and It All Going Wrong. The first three posts from the Sisyphus Diaries, ready and waiting for you now.
Posted by Meg McNulty

I'll have to get into these. Just not enough time to read and write and look for work it seems.

Tell me about it! I can't quite believe I've won the lottery yet!