Silken Ghosts: A Walk through Belgravia


"Lord Grosvenor has built a new and elegant town on the site of fields of no healthy aspect, thus connecting London and Chelsea, and improving the western entrance to the metropolis, at a great expense." - writer, 1831 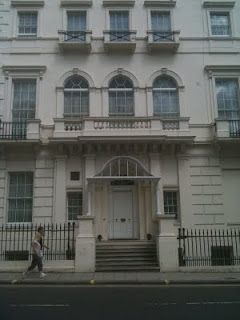 Yesterday, I was loitering in Belgravia. The sun was shining and the person I was meeting was running late, so I had a good chance to populate the street with the daring regency maidens of my imagination, to see link boys and carriages and debonair men swinging canes. The only thing is, I didn't have to try terribly hard.

Belgravia was built by the Grosvenor family as a playground for the super-rich. Its grand stucco-fronted mansions, shady squares and sweeping terraces were steeped in exclusivity and conspicuous wealth. They still are.

Crested carriages have given way to dark-windowed limousines and the blue-blooded English have been supplanted by wealthy Arab families and Russian oligarchs but the area shimmers with wealth and entitlement. It isn't difficult to imagine crowds of link-boys gathered in the mews, or glossy flanked horses trotting across the road into Hyde Park. It isn't difficult to imagine the windows alight with the glitter of candlelit chandeliers or nannies pushing creaking prams into the dappled gardens. 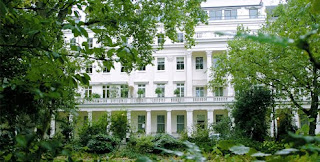 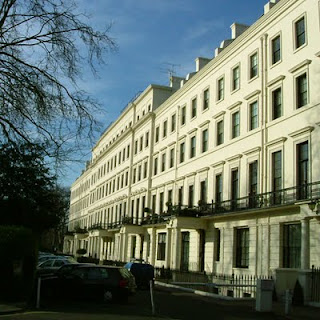 A single bedroom flat in Belgravia will cost over £800,000 to buy. A mansion like this one will cost upward of £30 million. Not a cheap buy then.

It wasn't always so salubrious however. Before the 1820s, when the Grosvenor family drained the land and began to build, it had a considerably more humble visage. In 1878, Edward Walford writes:

"Where now rise Belgrave and Eaton Squares, the most fashionable in the metropolis, there was, down to about the year above mentioned, an open and rural space, known as the "Five Fields." It was infested, as recently as the beginning of the present century, by footpads and robbers."


"In the Regency, when Belgrave Square was a ground for hanging out clothes, all the space between Westminster and Vauxhall Bridge was known as 'Tothill Fields,' or 'The Downs.'"

The surrounding areas were not much better:

"It was a dreary tract of stunted, dusty, trodden grass, beloved by bull-baiters, badger-drawers, and dog-fighters. Beyond this Campus Martius of prize-fighting days loomed a garden region of cabbage-beds, stagnant ditches fringed with pollard withes. There was then no Penitentiary at Millbank, no Vauxhall Bridge, but a haunted house half-way to Chelsea, and a halfpenny hatch, that led through a cabbage-plot to a tavern known by the agreeable name of 'The Monster.' Beyond this came an embankment called the Willow Walk (a convenient place for quiet murder); and at one end of this lived that eminent public character, Mr. William Aberfield, generally known to the sporting peers, thieves, and dog-fanciers of the Regency as 'Slender Billy."

Belgravia's history is populated with a variety of colourful events and establishments. It was home to St George's Hospital and to Tattersall's the auctioneers, "so renowned through all the breadth and length of horse-loving, horse-breeding, horse-racing Europe."

In 1784, 'Five Fields' the site of Belgrave square also so the famous balloon ascent by the Frenchman Monsieur De Moret:

"Whether M. Moret ever really intended to attempt an ascent in such an unwieldy machine, has never been clearly ascertained. … However, having collected a considerable sum of money, he was preparing for his ascent, on the 10th of August in that year, when his machine caught fire and was burnt; the unruly mob avenging their disappointment by destroying the adjoining property. The adventurer himself made a timely escape; and a caricature of the day represents him flying off to Ostend with a bag of British guineas, leaving the Stockwell Ghost, the Bottle Conjurer, Elizabeth Canning, Mary Toft, and other cheats, enveloped in the smoke of his burning balloon." Book of Days, Chambers.


Sadly, modern Belgravia lacks some of the seemier colour of its distant past but for someone with a passion for Georgian England, it's a must-see destination.

Just make sure you're armed with Edward Walford's Old and New London, Volume 5 (1878), so that your imaginings of silk-clad ghosts are tempered with the grinning face of Slender Billy and the smell of cabbages.

For more on the history of Belgravia see the utterly wonderful British History Online, an incredibly detailed repository of knowledge.