Portals to Another World 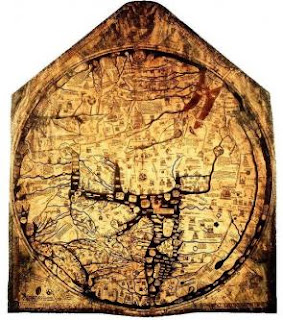 Yesterday I wrote about letters as a window on the past. That seems to be the theme of the week, because today I'm going to obsess about my visit to Hereford Cathedral.

Hereford Cathedral is notable for all sorts of reasons, but I went there to see the Mappa Mundi, a medieval map of the world. Drawn on vellum in vividly colored inks, it places Jesus and Jerusalem at the centre of the world and peoples the three continents (Australia and the Americas being as yet unknown) with minotaurs and cannibals, rocked by the twelve winds. It's a work of art and an outstanding piece of propaganda. And it's a portal to another world.

The medieval world seems very distant to me. It's a tapestry of cold-hearted high born ladies and tortured knights, crusades and wars, religious mystics and machiavellian royalty, brought to me in black and white by history books, biographies and novels. The treasures of Hereford animated that image, exploding in glorious technicolor across my imagination. I could see a world still echoing with the remnants of the Roman empire, where the carpet of christianity lay lightly over an ancient foundation of pagan mythology and the interconnectedness of the East and the West was clearly evident. The power dynamics of that world are outlined in vivid crimson and poison green, the scope and imagination of those long-dead ancestors whose learning was far broader than I had truly appreciated. 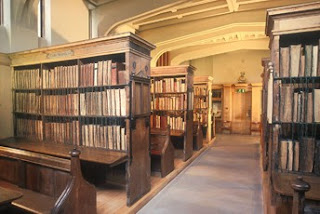 The Chained Library at Hereford hammers that point home. I had never heard of book chaining, a wide spread practice from the middle ages through to the 18th century which ensured rare and precious books could be made available to scholars for study. The chained library at Hereford isn't a museum, it's a working library. The books are shelved in touching distance, chains intact. You can smell them. If you're a scholar, you can study them. Illustrations of ripening apples compete with translations of the bibles. Manuscripts are available dating back to the 8th Century. It is amazing, a vellum bound tardis that transports you back to an era where learning was held in the hands of a very few and before the world-changing genius of the printing press brought the gift of reading to the masses.

It gave me cause for reflection, that image of a richly colored medieval world, stamped onto vellum and pinned to a board and that library, where learning sat in chains, accessible to just a few.

We are so lucky to be able to hold books in our hands (or kindles, or ipads) and to soak up knowledge from across the globe in mere seconds. It also made me appreciate the importance of guarding these signposts to our past. They halt our complacency in its tracks, help us to see the wonders of our world but also its weaknesses and show us that civilisations past were every bit as ingenious and sophisticated as we are today.

They are Portals to the Another World - and mirrors of our own.
Posted by Meg McNulty

Do you remember a rather odd family holiday where we visited Ross on Wye (where there were Boy Racers in souped up Novas) and Shrewsbury (because Mum/Mimble/Mother liked Cadfael books)? We visited the Mappa Mundi then and I recall learning about cave-dwelling troglodytes.

It was an odd holiday characterised by desperate rushing to get to tourist information offices to book that night's b&b. I think we were going to see Did and Rob in Bristol as a destination so we were pretty young

And there was ginger cat in Ludlow that had kittens - freak! I thought all ginger cats were male? I enjoyed that holiday!

Don't even know how I would survive with my reading pleasures. I tell myself often that I will have more time when I'm out of school and then I just keep taking classes so I don't think I will ever stop learning. Great post.

You've sort of become the epitome of learning and the informed writer for me. I love the detail that goes into your work and the reverence you have for knowledge gets applied well from what I've seen.
I like learning and finding material for my writing, but I think my strength is more in the made up elements and fantasy worlds. I actually envy your apparent capacity for learning.

Thank you David, that is one of the nicest compliments I have ever had! I really appreciate it.