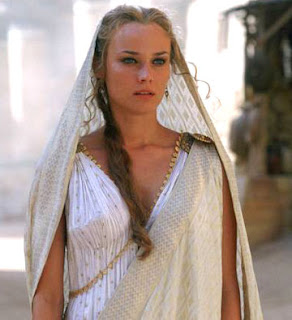 I'm something of an extrovert. By which I don't mean that I bounce off the walls, perform live on stage and talk to a trillion people all at one (well sometimes that last one is true). I mean that my energy from things outside of me. And I tend to do my thinking out loud.

So big thanks to David and Anne-Mhairi for their generosity yesterday in sharing some of their thoughts on what I can do with Sisyphus. It really got my creative juices flowing and thinking. I've got a nucleus of a plot forming and a couple of characters to build it around. First there's Sisyphus - you met him yesterday. Then there's Helen, who for the purposes of my story is going to be the equivalent of a School Prefect for the Gods. A saucily packaged snitch, whose job is to keep an eye on Sisyphus and make sure there's no funny business.

And how do they get her to comply? Well, here's how (first draft, hot off the keyboard).

It was like being saturated in liquid gold. As though the sun had exploded in her body, transforming her veins into rivulets of molten amber. Her limbs were feather-light, her tongue drenched in sweetness. The world was masked by a rose-scented, shimmering mist that transformed it into a harmonious, rainbow tapestry. She felt good. She felt beautiful. It was the only time she did.

“She’s eaten too much ambrosia again.” Hera’s voice, dry as tinder. She wanted to put her hands over her ears, drown it out, but her bones were liquid, swirling. It was impossible to move. “Pathetic. This is what comes of indulging an old man’s folly. And he thought to make her a Goddess! Her!”

“You think I’m afraid of my husband, Artemis? He knows well my views on his half-breed spawn. It’s revolting, the way he chased after that light-skirt Leda. A swan! I suppose we can count ourselves fortunate that his brat doesn’t have webbed feet as well as being a dribbling imbecile nine tenths of the time.”

“Swooning, dribbling – what difference? Look at her! Doesn’t it turn your stomach? And men fought wars over that... legs akimbo like a dockside whore, hair all over the place.”

“Because she’ll do anything, that’s why - anything to get back here to satisfy her pathetic mortal craving to taste what we taste. She’ll whore herself, kill, trick and deceive to clamber the greasy pole back to Mount Olympus now she’s tasted it. Look at her, look at her eyes - black as Hecate’s cauldron.”

I hate you. The words danced through her mind but they had no meaning. Not when her whole body was sunk in slumberous ecstasy, not when the scent of ambrosia still clung to her skin, her hair, her tongue. A dark shape loomed through the iridescent mist, a face coming close to hers. She could feel hot, sweet breath on her skin, the heavy perfume of pure divinity cloying in her nostrils.

"You love it, don’t you Helen?” Hera’s words were low, inviting. “Imagine being cast down there again, to those ravening dogs of men. You’re ambrosia to them, aren’t you darling? Don’t they all hunger for a taste of you?”
She whimpered, stirring against her will. Go away. “It’s that little trace of God-head... like catnip to a mere mortal man. How many men died to get a piece of your sweet body, Helen of Troy?”

“But you’re safe here aren’t you, lovely? Just an ordinary girl... and it tastes good doesn’t it?” A finger traced across her lips, trailing droplets sweeter than honey, richer than wine. Her tongue flickered, desperate. More. “You want it don’t you, little Helen?”

Hera’s laughter was cold as starlight, slicing through Helen’s reverie like hailstones in summer. The shadowy shape disappeared, the taste of ambrosia was gone. She moaned, her sense of loss palpable.

“You see Artemis? Pathetic. She’ll do anything to get back here... and she’ll keep him in check. As soon as he sees her, he’ll want her. They all do. Sisyphus might think he’s clever but he’s as led by his cock as any man.”

A pause, a hesitant rustle beside her. “Possibly. She’s Zeus’ child though. He’ll-“

“Zeus lost interest in her more than three millennia ago,” Hera’s voice snapped, whiplash sharp.” She was an entertaining toy when we had the Trojans to play with, but once that war was over... he has so many of them you see.” The words drifted through the air, delicate as poison, deadly as a cuckold’s kiss. Silence fell between them, settled over her like a soothing blanket. Then Hera spoke again, and Helen heard the unspoken laugh. “She’s expendable.”

Now I'm thinking about a mission. There's a thing Sisyphus needs to get, a thing the Goddesses need him to do. A person. And it needs to be a secret. For some reason, the Goddesses don't want Zeus knowing anything about it. Why? I don't know yet. But I expect they'll tell me soon.

This is how stories start for me... with a scene or a character and it grows from there, different ideas colliding and clashing until suddenly one of the clashes turns into FUSION.

How does it come to you?
Posted by Meg McNulty

I think of an event which moves me, and then work out what the characters would have to be like to fit in that event. Then knowing my characters a bit, I think what events would lead them to that event. That's usually enough to get the ball rolling.

I was thinking that was quite a different approach but actually, I think I've done that too. Certainly one of my stories at least had its genesis in an event that moved me. But I think my life experiences generally filter through in different ways - in facets of characters. Slightly scary sometimes... you find out some home truths about yourself!

Hera was always a cow, from what I remember, so she's an excellent choice! I think you might be giving away too much here but it's certainly good to know the motivation. Now... the mission... Artemis was supposed to be quite pure, so having her teamed with Hera means she must consider the mission to be a 'for the greater good' kind of thing. Whereas Hera should have some personal stake... Maybe she created a son? Zeus wouldn't be happy about that. If the son had abilities it might be in Hera's interest to find him and either control him or kill him before he started manifesting his powers in such a way as to get himself noticed by other gods, namely Zeus. Then you just need some kind of tie-in so that Sisyphus will have to really think about whether or not he wants to kill him and voila! Dilemma, and therefore conflict, abounds! :D

Agreed! This is essentially back story (for Helen) so I think would not go in the actual story but is following the method I was talking about the other day about using bits of flash fiction to get to know your characters inside out. I'm finding it really effective - and fun - like the DVD extras.

The things I like about this back story is it gives automatic conflict: Sisyphus hates gods and goddesses and she's been living up on mt Olympus as a goddess for a few millennia so that puts her on the black list. She however being half mortal has never fitted in, hates herself (people never see past her face and on Olympus she ain't all that anyway) and cos she's mortal, ambrosia operates on her differently so she's become a divine junkie. She's working for the Gs and protecting their secrets otherwise she's kicked out of heaven and the good stuff but she kind of hates them too. Unfortunately due to low self worth and wanting ambrosia she can't see her way past wanting to be them.

So she and Sisyphus are both pretty dark and bitter with plenty of reason to loathe each other and plenty of reasons to work together. I'm thinking it's not a romance though.

I just came up with a kick ass ending in the bath which involves monsters, twists and prophecies. Very pleased! Just need to work out what goes in the middle now!

I am really excited to see what happens with this story. Your rich language and beautiful adaption of mythology really captivates me.
As for how I come up with my stories; I need Characters and Plot. I can come up with them in either order and they tend to grow quickly, but I tend to start with characters that interest me and then find ways to put them through their paces. Sometimes though I just get a mental image like a boy with broken wings in a desert and have to build a story around it.

I'm excited too! I love it when ideas and images come thick and fast. I love the image of the boy with the broken wings in the desert - do you have a story on that? I'd really like to read it.

Thanks so much for your kind comment! It's very encouraging :)

I haven't written the story yet, but I have it outlined. It's titled "Broken" and follows a young brother and sister in a post-apocalyptic world who discover a fallen angel trying to fly with broken wings who appears to be their age.

I would love to hear more about it when you do. I've always enjoyed the scope of post-apocalyptic novels - a big chunk of my YA reading when I was growing up!

I've been thinking about character journalling and decided to take it to the nth degree and do a diary for my main character, to get to know him whilst I'm working on a plot for the story.

So I've started his memoirs here:

If anyone else was interested in doing that for their characters I'd love to read them!