Finding Yourself in letters from the Past 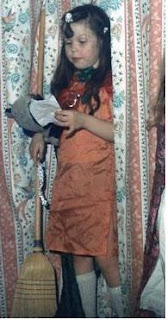 My lovely big sister Kate is relocating to the enthralling environs of Berlin. Jealous, moi?

In the process of clearing her already immaculate house, she unearthed a cache of letters from bygone years, including a number written by me and my little sister. It made me realise how much memory distorts the past, or how it builds layers of interpretation onto recalled events. The letters brought back that younger me with startling clarity, the things I loved and which occupied me. And curiously enough, I haven't changed not really. Or rather, I have become once again much closer to the person I was back then - and who I enjoyed being. I'm where I should be, doing what I always loved. It's a nice feeling.

So here's me, age 12 (I have no recollection of referring to my mum as 'mother' -I suspect I was heavily influenced by my reading matter!):

"My health is very well. I am reading a wealth of Georgette Heyer. I have read Arabella (well actually still reading it). And I actually read Frederica recently. I started Bath Tangle but decided to wait till later since the script was harder to follow. In the dining room Mother has cleared out the junk, toy and mess cupboard into 3 shelves, one for me, one for Pete and one for Gilly. They are for homework but I have filled mine with Georgette Heyer books."

And better still, a fictional tongue in cheek account of my brother's proposal to his then fiancee (they have now been married more than twenty years). I must have been about ten. I'd like to think my writing has improved, but frankly, I'm not sure that it has:

As Ben watched the sun go down behind the hazy blue hills he clenched his fist. The sun looked red, almost as red as his throbbing heart. He turned towards the great white house in which only one window was lighted, it was Alison’s. He walked into the corridor through the green door. It was dark but he saw a slit of light in Alison’s door. He walked up the stairs and knocked at the door. “Yes”, said Alison’s sweet voice, “Come in”. Ben’s fingers quivered on the door knob as he opened the door. At first they talked about their jobs, the weather and fashion. Then Alison said, “what have you really come for?”. Ben fell on one knee. “Alison, will you marry me?” Ben said. Alison, trembling, flung her arms around him. Ben felt tears on his cheeks. “Its like a dream” he thought. They knew they were to be together. "

And lastly, a touch of realism:

A letter dated Oct 1988, which is illustrated by a drawing of mouldy carrots, reads:
“There are some mouldy carrots at the bottom of the back kitchen fridge slowly rotting away, they look like this...horrible.”

It has always been possible to uncover dodgy vegetation of some sort in my parents' fridge, the most famous being The Everlasting Fruit Salad which fizzes. Only ever consumed by unwary potential in-laws, I'm certain its gut-gripping powers are the secret of my Dad's eternal youth and appalling bowel problems.

I miss letters. We have so much floating about in the public domain, held by an invisible net in the all powerful ether but so few tangible records of our daily lives. My daughter will probably never stumble across letters from me, or have that intimate window on my past. More's the pity.
Posted by Meg McNulty

I say bring back the letters, take out the stationary, and find the multicolored pens. I miss the days when not all of my mail was bills, magazines, and junk.

So true! When did getting post become depressing? It used to be a thing of joy!

I still love a letter if I actually get one--though admittedly only write them myself in response.

As for your writing, I say with confidence you have gotten much better since the proposal letter. Though that one certainly stood out to me as color-filled.

LOL thank you! It makes me laugh reading it. I love the fact that my idea of romance at age ten was them talking about jobs - what was I thinking?! 'Tis not the stuff Mills & Boon is made of!

When I was a kid I wanted to bring happy letters to everyone for a job. Then mum said I'd also carry bills. Dream switched back to archaeologist.

You've gotten better, though I think your story's cute. Better than what I wrote at 13, oh the talking heads...

Until you found out about all the low paid labour in muddy trenches dressed in florescent clothing? ;-)