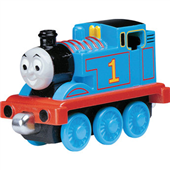 A couple of weeks ago, Lady Antimony launched her #7Sins blog challenge: 7 stories in 7 days on the 7 deadly sins, to start on the 7 July. So here we are! And we're kicking off with Greed:

He had to have it. It winked at him through the window, shining bright as hope through the murky twilight. He just needed one more. That one. Then his collection was perfect, complete. It should have been his in the first place.

The glass broke easily beneath his eager hands, falling in a muffled tinkle. He ignored the lacerations, the crimson drip on the carpet. He was nearly there, nearly touching it. His breathing quickened, pulse beating. He lifted it to the light.

He didn’t hear the door creak. “Grandad – what are you doing with my Thomas?”

Check out some other #7Sins works of flash fiction:

Raw and powerful WRATH by Bryce Daniels (I defy you not to be moved by this!)
Murderous GREED by Lady Antimony
Coffee-tinged LUST by Glitterword
An interesting take on fairy cake inspired GLUTTONY by Rebecca Clare Smith
Poignant, understated and entirely human GREED by Halli Gomez
Posted by Meg McNulty

I had no idea it was going to be a grandad taking the children's toy, Who knew? That is definately an interesting twist on Greed. Go little engine that could!

Ha! LOVED it. Nice twist on greed. Can't wait to see your other six entries.

Now I gotta figure out how to get my head through the door.

LOL, well I believe in giving credit where it's due!

LOL! A Thomas addiction can drive you to new depths. Mean grandad. Good one.

Ha! I know guys like this!
Thanks for sharing.
HMG

I have to agree, the grandpa stealing a toy (and getting his hands cut in the process) is a really sick and impressive example of the sin.
I saw the Thomas picture and figured this would be somewhat lighter fare. How wrong I was! Brilliant.

Great post! I love your style of writing. Can't wait to read more.

Thanks for the plug too!

Thomas envy: It's the secret intergenerational dynamic no on talks about ;) - thanks for your comments, much appreciated!

That was really cool and an unexpected twist. I really liked it.

Thank you for the shout out!