This week on Twitter, Katherine Mahon of the Scandalous Women blog (well worth a look) was tweeting about Regency House Party. Regency House Party is a British Channel 4 programme which brings together a number of likely lasses and lads to live Regency-style in a restored country house. One aspect of the House Party we both admired was the presence of a real life hermit - presumably the perfect complement to a fashionably picturesque garden.

This got us wondering about the lack of hermits in Regency Romance. Wouldn't all romances be improved by a dash of mad monk? Thus, in the spirit of adventure here follows and exercise in bringing a hermit to the romantic world.


“Where did you find him?” Lady Clovenstone asked, with a glance across the Duchess’ sweeping gardens. “I must say he is most picturesque. I wonder whether Sir Henry could find one for the manor.”

“Oh how can you think it?” Miss Greenhaugh cried. Shuddering eloquently, she clasped one gloved hand to her thin bosom. “Just one look from those devilish eyes... one can see he must be repenting nameless crimes.” 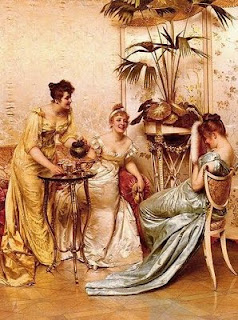 “I have no interest in nameless crimes.” Lady Clovenstone said. She reached over and picked up a hand-painted china teacup, taking a tiny sip. “I had much rather name them. Do you happen to know his crimes Duchess? Did he perhaps come with a recommendation, like a butler or a housemaid? One can just imagine: My Dear Duchess, I am sending you a perfectly marvellous hermit. He has served in our grotto for three unexceptional years and his lamentations are quite exemplary. He has committed two murders and a fell seduction. I commend him to your service and hope you are able to make use of him.”

“Something like that,” Anne, the Duchess of Montfrey murmured unable to follow Lady Clovenstone’s bright gaze. She stared into her cup of tea, a delicate flush mantling her cheeks. As the Duchess of Montfrey was generally held to be a disappointment, no one appeared to heed this lack of savoir faire. It was obvious when the aged Duke had wed so young a bride that the local gossips had anticipated a most delightful scandal to follow. The Duchess’ quiet manners and steady ways thus came as an unpleasant surprise. Her subsequent production of a healthy heir, which the Duke’s two previous wives had failed to deliver, was felt to be unsporting. That much was obvious from Lady Clovenstone’s barbed witticisms and the pale boredom in Miss Greenhaugh’s expression.

Until the hermit had arrived.

The appearance of so striking a man on the ducal estate had not passed unnoticed. Within a day of his residency in the shell grotto, which represented the focal point of Anne’s lovingly disordered picturesque garden, the harpies had descended. She sighed softly and looked out across the green woods, wondering what her hermit was doing at that moment. Kneeling in spiritual rapture, communing with the sheep... it all sounded wonderful in comparison to taking afternoon tea with Lady Clovenstone.

The gardens were her pride and joy and the shell grotto the jewel in her landscaping crown. In the twelve long months following the Duke’s death at the age of sixty two the gardens had swallowed up all her energy. As she walked through the austere rooms of Grandon House, the Montfrey’s Principal seat, she had dreamed of twisting vines and crumbling statues, winding streams and hidden caves. The gardens would be a fantasy land populated by nymphs and fairies, dancing together in the moonlight.

The grotto had been a fancy, born of one such fantasy. But she had not precisely anticipated its inhabitation by the wild eyed windswept fellow who had appeared at Grandon’s door one moonlit night.

“He did have references, in fact,” she said suddenly. Her unexpected disclosure caused Lady Clovenstone to choke on a crumb. As Miss Greenhaugh patted her companion vigorously on the back she fixed them both with a most uncharacteristic stare. “The Duke’s cousin – the bishop you know – sent him here. I had mentioned a hermitage, merely in casual conversation and I fear he took me quite literally. He sent the gentleman here with a most praiseworthy letter, asking if he could be housed on the estate.”

“But who is he my dear? Who are his family?” Lady Clovenstone managed, whilst spluttering elegantly into a lace-edged handkerchief.

Anne shrugged and took a sip of tea. “The Bishop merely referred to him as Francis.”

“But surely you asked him?”

Anne smiled sweetly and set down her cup. Closing her eyes for a moment, she felt the sun warm on her face and listened to the trees rustle. A sweet smell of honeysuckle drifted from the main house. “Of course. But he has taken a vow of silence.”

It was novel and also, essential. The man’s eyes were eloquent enough, dark as midnight and full of secrets. She could only imagine what his voice might be like, rich as brandy and unfathomably deep. Last night she had dreamed of him leaning over her, his eyes burning with passion and his unexpectedly sensual mouth curling into a mocking smile. She had awoken hot, flustered and deeply unsettled.

He’s just a man, she told herself. Just a man.
Posted by Meg McNulty

And you said you'd had no time to write. This is fab!
Is this an opening to a new book, or are you trying out an idea?
Either way I like it.

You have to finish this! It's fantastic. I can't way to see where you go with it.

Just a bit of fun! Maybe it'll turn into something... or maybe I'll just write a whole series of random scenes featuring hermits ;-)