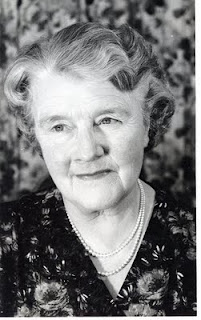 My Granny died before I was born. My little sister and I are the only ones amongst her twenty five grandchildren never to have met her.

And I know certain apocryphal stories. There's the tale that her husband gave her an emerald ring his birthday to express his gratitude that she was his wife. And the rumor that she carried on an impassioned correspondence with a catholic priest who had been billeted with them during the war. Letters that were allegedly destroyed after her death, leaving her grandchildren filled with rampant speculation.

And then there are the items she left behind. A wardrobe full of fur coats. I used to stroke the sleek, soft sleeves when I was little and imagine I could brush through them and find myself in Narnia. A worn but serene statue of the Virgin Mary who smiled down at us from the carved welsh dresser throughout childhood. And then there were her stories.

Granny was a writer.

Not just any old writer. A romance writer. We have a box filled with clippings of the stories she had published, yellowing and fragile with age. We have the tiny book in which she recorded her writing income in shillings and half pence - foreign currency to decimalised me.


"In all these long years there seems not a stick or stone that is altered; just as though time had stood still in this enchanted corner of the earth!"


Granny didn't leave a diary. Her letters were destroyed. Her stories are the only words I have left of her. And they are fascinating. Not because they are high brow literature - they aren't - but because of what they hint about the woman who founded my family and the times in which she lived.

Between 1932 - 1952 Granny published more than twenty stories. She started writing just before the birth of her youngest child and continued well into her middle age. Her published stories span two decades which saw war, austerity and a rapidly changing post-war world.

"Before the eyes of her mind the great purple mountains of Connemara reared their mist-crowned heads above a lough of shimmering silver that was set in the ebony bogland."


Granny was a second generation Irish catholic immigrant. She barely set foot in Ireland her entire life, yet her misty eyed attachment to the Emerald Isle permeates practically all of her work. When I travelled to Connemara ten years ago, it was my second visit to the county. I had been taken there first by Granny's stories. I expected black stone walls and patchwork fields ringed by misty mountains. I expected to see bare foot girls with streaming black hair running across the fields.

Many of Granny's characters return to Ireland after an absence where their material success and change in class has led to an erosion of their religious faith - a conflict which she must have witnessed frequently in her own circles. Her characters' return to Ireland and often a reunion with a childhood sweetheart is usually the catalyst for faith to be renewed. Granny's fantasy, her re-imagining of Ireland is as the wellspring of simple faith and love.


"She felt it was impossible to pray, and stifled her conscience with an adopted air of cynicism; but beneath it all she was restless and unhappy, although she refused to admit it even to herself."


This theme of faith is very strong in Granny's stories. True love comes to those who believe and heroines don't put out. Priests are often the agents of romance, the bearers of messages and providers of sage advice. Those who have lost their faith feel jaded and sad; the reinvigoration of their faith brings love in its wake - and a happy ever after.

"When the hour of your need came he did not fail us... and 'twas he firmly believe that led you to hospital and to us. May he bless you both!"


It was only this year that I stumbled across the massive market for faith-based romance, with imprints such as Steeple Hill Love Inspired selling thousands of books every year. It's odd to think that my Granny was at the vanguard of this, publishing in publications like The Catholic Fireside and The Dowry of Mary.

Meanwhile the trend in other strands of romance is utterly counter to this. Historical romances, for example, are getting hotter and its heroines are more sexually liberated. New more heavily sexualised romance genres are emerging all the time (Blaze, Nocturne Bites, Historical Undone). Eloisa James makes an interesting point:


"No matter how historically accurate the details and language in our novels might be, we write sex from the point of view of our own contemporary attitudes and mores."

I would argue the same is true of romantic fiction in general: romance reflects our cultural beliefs and we choose genres that fit with our construct of the world. It is interesting therefore, to see two such rapidly diverging streams of romance - faith-inspired romances with christian characters versus saucy courtesans and sexually active women with little or no religious affiliation. I wonder what this says about the world we live in now?

As for myself, I wonder what Granny would make of me and I would make of Granny. My romance, Merely Players, has the heroine throwing off the shackles of her religious upbringing to find love. It shows her discovering that human warmth and love is in fact what attracts her. If anything, it's almost humanist in its ideology - though that is not intentional. I'm working on an Undone, which is fairly heavy on the sauce - though it does show two characters finding a redemption of sorts by reuniting with each other.

Would she have hated my work or liked it?

She sounds a wonderful lady! I am sure she would have been proud of you. It's one of the rules for being a granny.

One of my nana's passed down a joy of anything craft. I used to love it when she came and visited and she would teach me a new knitting stitch.I think of her whenever I smell the combination of polos and cigarettes !!!

My other nana left behind over 50 grandchildren, and I think over 20 great grandchildren (so far) and the most poignant thing I can ever remember her telling me was that nothing you ever learn is wasted.

Are you blocking out the brief drive into Connemara on that family holiday with Ma and Pa to hunt up relatives? The one where we ended up having high tea with people who weren't relatives?

Somewhere I have the compilation A-M did of Granny's writings. I must dig it out

I was just re-reading it - hence the blog post. I don't think that visit was to Connemara, I think it was to Roscommon. Certainly I don't remember any misty blue mountains, though I do remember cake. And yes, I had blocked it out. Weird holiday!

What a wonderful tribute to your grandmother. I'm sorry you never got to meet her. I bet she would have loved to know she had a granddaughter following in her footsteps as a romance writer!

As for Ms. James' quote, I absolutely agree. Romances must adapt to the trends of society. I wrote my college thesis--much to my extreme-feminist advisor's dismay--on the persistence of the romance from medieval times to present day. From Chaucer's Canterbury Tales and the rise of the courtier society, to Pride and Prejudice and the emergence of the idea of "marrying for love," to today's more popular genre romances where women work and have their own independent lives outside of a marriage to a man, but still end with a proposal. I see the tides of romance shifting again soon, perhaps away from the marriage proposal ending, to one of a partnership or a "romance without a ring." Am curious to see how this plays out throughout my lifetime. :)

Thanks for this post. It brought me back to my college days. :)