How do you inspire your writing?

Where do you get your inspiration from?

According to Stephen King in the really rather marvelous On Writing (Inspirational? Check! Informative? Check! Gripping? Check! Highly recommended) this is a question he gets asked all the time. The description he gives of inception is akin to nuclear fusion: one, two or three skittering ideas collide and WHAM! BAM! Inspiration explosion, or in other words Fusion!

That makes sense to me.

I think writing is like cooking. You chuck in tomatoes, stock and chilli and all of a sudden you've got a fiery soup. Add a kumquat and you're in uncharted territory. It might not work but you experiment. Maybe a little coconut milk? Maybe a lime? Stir, stir, stir....

My work in progress, Merely Players is a toothsome medley of two historical events: the emergence of Primitive Methodism and the rise of Illegitimate Theatre. Both were developed somewhat in opposition to the 19th Century Establishment, but held superficially opposing values. Non-conformists were even known to demonstrate outside theatres, in reaction to the apparent immorality peddled by the acting fraternity.

Yet, both required a sort of stagecraft. Primitive Methodists were criticised for their noisy sermonising, loud singing and displays of emotion. They galvanised crowds. Both appealed to the working classes. Primitive Methodists were active in the trade union movement; illegitimate theatre developed into the music halls which provided mass entertainment for the mid-late 19th century english folk.

What if you bring two people together from these disparate backgrounds? What will happen in the mix of these two strands within the framework of romantic fiction?

It coloured everything. A walk in the woods became full of dryads; the beach was scattered with mermaid's treasure; I listened to the North Wind and wondered who was at its back and lay awake on Christmas Eve wondering if our cats would start talking. Reading enriched my world: it added a layer of colour, imagination and history to everything I saw, touched and tasted.

I grew up in a house stuffed full of books; the legacy of a bookworm mum and ten older siblings. I wasn't limited to age appropriate books. I could read whatever I liked, whenever I liked. I was a past master at skiving off school for various spurious complaints (feeling "eggy & milky" was almost a catchphrase) and I filled my head with literature, good, bad and ugly. I remember staying up until dawn reading books like Ludo and the Star Horse (the incomparable Mary Stewart) and wondering why I felt too tired to get out of bed. That's a habit I have still to break!

Now I have a daughter myself, the ability to lose oneself in books is a legacy I want to hand on (though not the skiving off school). And so far so good. 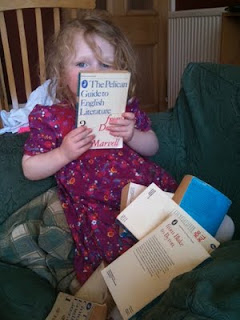 Today she took a fancy to The Pelican Guide to English Literature. She isn't a child prodigy (well she is, of course, isn't everyone's child?) - she likes the big numbers on the spine. I read her a bit of Chaucer badly (I'm no expert on Middle English) which bemused us both and I then tried to tempt her with Byron at which point she got bored, told me I was too noisy and started playing games on my iphone. Fair enough. "She walks in beauty like the night" might send tingles down my spine, but from a three year old perspective, it certainly lacks the side-splitting giddiness of Hairy MacLary from Donaldson's Dairy.

However, abortive my excursion into 19th century poetry did get me thinking though about which poems from my childhood tugged my heart strings and stirred my blood; which poems I would like to know more about... and to explore the ideas behind.

Fusion! You'll see where I'm going with this...

I blogged before about how I loved Patricia Ryan's reworking of Hitchcock as a medieval romance. Now I'm wondering about re-workings of classic poetry (this idea-making process is I've heard described as 'composting'). It reminds me of an exercise we did at school, where we had to write the diary of the eponymous Duchess in Browning's My Last Duchess. Great fun.

The story I would like to explore, rework and twist is Tennyson's The Lady of Shalott. As a child The Lady captured my imagination beyond any other poem. I could recite verses of it off by heart (and I never remember anything), my favorite being:

She left the web, she left the loom,
She made three paces thro' the room,
She saw the water-lily bloom,
She saw the helmet and the plume,
She look'd down to Camelot.
Out flew the web and floated wide;
The mirror crack'd from side to side;
"The curse is come upon me," cried
The Lady of Shalott

The rhythm gives such an urgency to the image - it still excites me now. How much is one woman prepared to give up to see a man who she can never meet? Poignant, tragic... I can feel the what ifs coming on already. What if that curse continued through all the women of her family? What if she and the knight were reborn in another generation? What if...?

Are there any poems or songs you would like to rework? Where do you get your inspiration?
Posted by Meg McNulty

I just started reading your blog... Getting to know you. I love your novel idea, sounds totally fascinating and unique. Bravo.

Hi Bronwyn and VMichelle - thanks for your comments! Bronwyn, I'll PM you!

What a great web log. I spend hours on the net reading blogs, about tons of various subjects. I have to first of all give praise to whoever created your theme and second of all to you for writing what i can only describe as an fabulous article. I honestly believe there is a skill to writing articles that only very few posses and honestly you got it. The combining of demonstrative and upper-class content is by all odds super rare with the astronomic amount of blogs on the cyberspace.