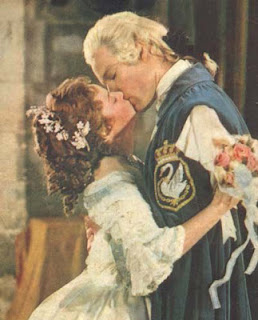 I love a good film. I'm not ashamed of it. I work two jobs and I write constantly so I don't have time for TV, but films are a different story. They're a finite block I can fit into a particular day. It's a love I share with my daughter who, like me, doesn't really watch TV but is a film-a-holic. We're working our way through various fairy tale reworkings and fantasy tales. She's too little to pay much heed to quality special effects or famous names, so I am at full liberty to introduce her the films I loved when I was little. Apart from the Disney staples (Sleeping Beauty, Cinderella etc), we're working our way through the delights of The Slipper and the Rose and Labyrinth (there's a men in breeches theme running in my choices, which may have sowed the seeds for my love of historical romance), not to mention The Neverending Story and various magnificent MGM musicals.

When my daughter is tucked up in her bed I am at liberty to pursue other genres. I grew up watching old films. Some of my happiest film-viewing memories are of being wedged on a sofa between my sisters smothered in a dog-haired sofa blanket watching the witty interplay between Cary Grant and Katherine Hepburn, Humphrey Bogart and Lauren Bacall, Audrey Hepburn and Gregory Peck. I love them still. Nothing gladdens my heart more than buying the traditional Christmas copy of the misnamed Radio Times and finding films by Alfred Hitchcock, or Powell & Pressburger on the box. My favorite film of all time has to be Powell & Pressburger's I Know Where I'm Going. The splendor of IKWIG is a blog post in itself, however, so I will try to get back to the main point.

I have blogged before about the connection between historical romance and the fairy tale, so I won't go over old ground here. What has sparked my interest this week is the interplay between fiction writing and film. This is inspired by finishing two excellent books by Patricia Ryan, Silken Threads and The Sun and The Moon. Both are a billy bargain on Kindle (it would simply have been rude not to snap them up), but more importantly they are really rather wonderful.

I'm usually the first to say that I am not a fan of medieval historical romance. There are too many books knocking about stuffed full of irritating archaic vocabulary and ludicrous behavior. You know the type of thing: gently born convent-bred maiden gets kidnapped by hulking warrior but wins his love by stabbing him with his own sword, whilst thee-ing and thou-ing all over the castle and indulging in some brutal nooky in his war-tent. I'm not in the business of slagging off authors so I won't offer a reading list, but I'm sure those of you who regularly browse historical romance will be able to think of a few examples. Anyway, my pet hates are irrelevant here because Patricia Ryan is a different kettle of fish. Her books are thoughtful and romantic. Her use of archaic language doesn't distract, it enhances. Her characters are believable for their period, but also believable and likable as real human beings. A character's likability is a big deal for me!

Apart from just enjoying them on their own merits, what caught my eye about Silken Threads and The Sun and the Moon was that they re-work plots from Hitchcock's Notorious and Rear Window. Not re-workings of fairy tales which we see frequently in the historical romance genre, but loose re-workings of Hitchcock's tightly plotted suspense films, complete with walk on parts for the man himself. Instead of taking an old idea into the future as in the cases of West Side Story / Romeo and Juliet or 10 Things I Hate About You / The Taming of the Shrew, it's taking a new(ish) idea and placing it in the past.

Now I LOVE this idea and it got me thinking about what other films would translate into my genre of choice. This is my favorite kind of daydream - different ideas colliding and becoming something new. It's this type of thinking that produces plot ideas and characters and situations - and serendipity usually plays a hand.

On the Hitchcock front, Suspicion seems an almost too obvious choice, particularly for a period when divorce was well nigh impossible and people resorted to the most dastardly means to rid themselves of their spouses as evidenced by a fascinating post by Judith Flanders called How to Murder Your Wife in 2 Easy Steps.

That's almost too easy. But how about something different? Like Eternal Sunshine of the Spotless Mind, or Speed, or A Life Less Ordinary?

What films would you like to see re-worked as historical romance and why?
Posted by Meg McNulty