Celebrating with... a perambulation around Covent Garden

So, I finished my work in progress. I know I have said this as the opener for all recent posts but hey! It's a big deal! And I just darn well like saying it. So my baby is no longer a work in (writing) progress, it's a work in (editing) progress. Having been through the kindle/manuscript proofing type process I describe below, I have now started Putting it Out There.

First, I've put out feelers to find a critique partner on the Harlequin Forums and secondly, I've enlisted the support of two dear kindle-reading friends as first readers. The latter is a risky business. It's tough being asked to read work written by family and friends, because a. you know them so the temptation to psychoanalyse instead of to enjoy is strong and b. it's hard to be honest if you don't like something. Feedback from them is therefore strictly voluntarily - if they want to give me some, coolio, but if they don't I won't sulk. Not much.

The transfer of my little mobi version of Merely Players to Kat and Aysha's kindles was a ceremonial business and I chose the venue accordingly: The Lamb and Flag pub in Covent Garden. To say that I was excited about this is something of an understatement. Fuelled by three cups of coffee (enough to make me shake) and the sheer kid-in-a-candy-store excitement of tramping through London's historic streets, I was more than excited: I was PSYCHED.

Why? Because of finishing my book?

Because I was walking through my book.

Merely Players is set in and around the world of London's illegitimate theatres. The two theatres which feature are loosely based on the Adelphi and the Royal Coburg (now the Old Vic). So imagine my excitement at being able to swing by some of the hot spots favoured by my hero and heroine.

Happily, I had my camera in hand, so here follows a potted walking tour of London's illegitimate theatre.

Wait a minute! Hold the phone! What's an illegitimate theatre?

Aha, I thought you would never ask. Following the Licensing Act of 1737, theatres became subject to censorship by the Lord Chamberlain and only patent theatres, such as the Theatre Royal in Covent Garden, were permitted to perform ‘legitimate drama' e.g. Shakespearean tragedy and the like. In reaction to this dictum non-patent theatres sprang up, performing new genres such as pantomime, melodrama and burlesque: these types of drama were regarded as illegitimate and thus not subject to the Licensing Act. The Old Vic and the Adelphi both originated as 'minor' or 'illegitimate' theatres. 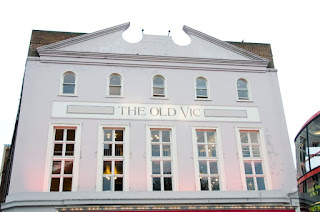 In 1818 James King and Daniel Dunn founded a non-patent theatre in Southwark. John Thomas Serres then managed to secure royal patronage from Prince Charlotte and the theatre was named the Royal Coburg in her honour. Despite being banned (as a non-patent) theatre from performing serious drama in 1824, the Royal Coburg's theatre manager managed to lure Edmund Kean south of the river to perform Shakespeare to the masses. Kean famously announced: " "I have never acted to such a set of ignorant, unmitigated brutes as I see before me." The Royal Coburg did a particularly good line in blood curdling melodrama which demonstrates the evils of drink - the pet project of teetotal inhouse dramatist Douglas Jerrold. In 1833 it changed its name to the Royal Victorian Theatre in honour of the new heir to the throne, Princess Victoria and by 1880 it was already known unofficially as the Old Vic.

Walking past the Old Vic and turning right onto Waterloo Road, it's about a 15 minute walk over Waterloo Bridge to get to the Strand, the main road bordering Covent Garden to the South. The Stand is home to the Adelphi. This was once a row of neoclassical housing built by the Adams brothers, which was home (in real life) to David Garrick and (in fiction) to David Copperfield. The Adelphi buildings were torn down in the 1930s, but the adjacent Adelphi theatre remains in its 1930 reincarnation. 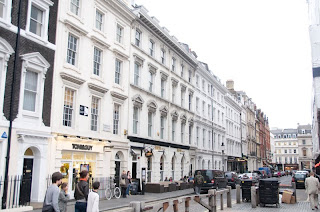 The streets of Covent Garden offer a cornucopia of architectural excitement for lovers of the 18th and 19th century. Named after the wife of Charles I, Henrietta St has stood since the 1630s and survived fire, flood, plague and even earthquake. In its earliest years it was a trade street, inhabited by victuallers and the like. For the regency aficionado it has most interest as Jane Austen's London pied a terre as her brother had an apartment above a bank there. She describes it as: “All dirt and confusion but in a very interesting way.” The street also bore witness to Richard Brinsley Sheridan's duelling. 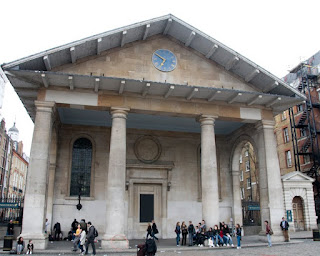 Walking on past Henrietta Street to Covent Garden's main piazza we find St Paul's Church, which was known as the actor's church. In Merely Players two members of the theatre company marry here. Today it most often forms a dramatic backdrop for street performances. 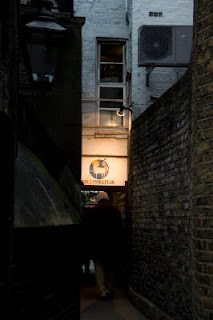 Onwards down Floral Street (in 1821 this would have been known as Hart Street) to the back alley of the Lamb and Flag. Originally much of Floral Street was occupied by fruit sellers and in the 18th Century it had at least 11 inns and multiple brothels. It was 18th century London's gay village, with 1709 diarist Ned Ward writing:

"Tis strange that in a Country where
Our Ladies are so kind and fair
Gay and lovely to the Sight
So full of Beauty and Delight,
That Men should on each other doat
And quit the charming Petticoat...
Who could Women’s Charms refuse
And such a beastly Practice use?" 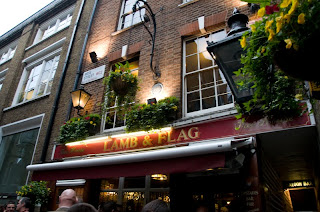 Walking down the back alley from Floral Street, we come to Rose Street and the Lamb and Flag Covent Garden's oldest licensed public house. In earlier times the Lamb and Flag was known affectionately as the Bucket of Blood thanks to the number of bare-fist fights which took place there. The pub's brick front and upper floors are from the 19th century but its core is from the late 17th century; when you enter the building it is like being transported back through time. The poet Dryden is said to have been beaten senseless in the alleyway by the pub and in honour of this, I include a reference in my book to the same thing happening to my hero!

As you might have gathered I like to imagine that the people from my imaginary theatre companies might have whet their whistles at the Lamb & Flag. Hence it is here that I ceremonial launched Merely Players into the wider world by transferring it onto Aysha's pink-clad Kindle. Look how pleased she is to have received it: 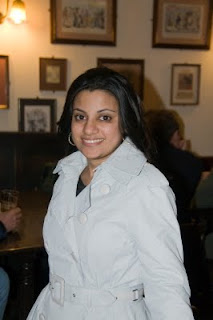 Sadly, Kathrin had pegged it out of the door before I could snap her too. Her ceremonial reception of Merely Players therefore took place in the rather less historic surroundings of Prezzo but hey, at least the kindle was still pink-clad.

My thanks to both lovely ladies for sharing in my excitement about this endeavour.

For more of the history of Covent Garden, I highly recommend these two excellent websites.

In and Around Covent Garden offers a drop down menu with street by street histories of the area.

British History Online which has excellent and detailed information about the history and archaeology of the streets and buildings of Covent Garden.

If all this trotting around Covent Garden's historic streets has made you devilish sharp set you might want to fill your boots regency style with a meal at Rules restaurant. Established 1798, Rules is still going strong today serving traditional British food, such as oysters and game. Being a vegetarian it didn't make it onto my tour, but it comes highly recommended by those who like to gnaw on a good bloody hunk of meat.
Posted by Meg McNulty