I've been curious about writing software for a while. By which I mean, writing software which goes beyond straightforward word processing and which is geared towards supporting a novelist in crafting their creative writing. Having googled about on t'interweb I came across Scrivener, a neat and reasonably priced piece of work crafted by a chap who seems to know what he's talking about. I had a good read through Scrivener's key features and I was impressed by what I saw. The software features useful little tricks such as:


Like many funky and creative things, Scrivener is created for Mac users. Sadly, I do not have the budget to embrace the magical world of Apple (though my iphone is the thin end of the wedge) and so I am restricted to Windows XP on my netbook. Happily, the clever people behind Scrivener have recognised that there are a group of us writing in the technological equivalent of a garret and have reached out the hand of friendship: Scrivener for Windows (SfW) is in Beta testing phase, due to be released in April.

Excited by this development I decided to take the plunge and to give the Beta version of SfW a whirl. In the same instant the thought entered my mind, my fingers were busy on the keyboard downloading this piece of technological magic and minutes later SfW was installed and ready for action.

Importing
The first thing I did was to import my work in progress (see last post). The actual import itself was relatively easy to do but was followed by a fairly laborious manual process of copying and pasting the 40,000 word long manuscript into different sections to take advantage of Scrivener's outlining tools. I don't think there is a quick and easy way to do this but it was worth the time and effort, because support with outlining and structuring is - I think - Scrivener's strongest suit.

Scrivener for Research and Planning
One of my (many) weak points is plotting (not in the conniving way). As I have mentioned before, when I start a new work in progress, my starting point is usually a scene or a situation: a ancient Greek antihero appearing in a girl's bedroom; an overheard conversation; a girl seeing a parrot for the first time; a hungover man being upbraided by a methodist temperance advocate. A situation anyway.

I usually mean to just note down the afore mentioned situation, but I start writing and before I know it I'm three chapters in and sailing uncharted waters without map or compass.

Here's where I find Scrivener useful: I'm 40,000 words in and I'm struggling to remember what all my character's look like; I need to know what their backstories are and what their first cousin twice removed is called. I could type all this out in word and save it to a file but it's a pain referring back to them all the time. I could write it out longhand, stick pictures to the paper and put it in a ring binder, but it's too static - it doesn't allow for the evolution of my character's, or for their emerging characters. Sometimes I only find out an aspect of that backstory part the way along. I want to have the flexibility to allow for that. Enter Scrivener.

In Scrivener I can write out character summaries and stick them into my project. I can refer to them and update them whenever I want, flicking between my notes and my manuscript whenever I like. I can attach images to my notes too, which helps enormously when trying to write authentically about the appearance of one of my protagonists. Here is an example: 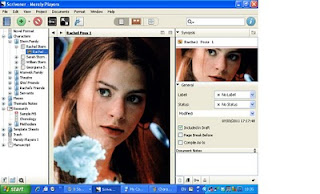 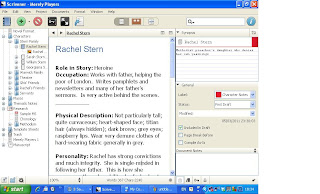 Scrivener for Outlining
Now let's go back to where I was, 40,000 into my novel. Not only are my characters morphing and wriggling but my plot is shaky too. I had a vague idea of where I was going - a general direction, if you like. But I'm getting stuck. I'm also concerned as to whether my manuscript is balanced - whether I'm getting a good distribution between my character's points of views and whether the emerging romance is being given enough of a priority. Scrivener to the rescue! Scrivener allows me to split my novel into chapters and scenes and to make notes on each element. I can look at this information in multiple ways - via the cork board or the outlining tool, or just in the left hand binder. Once I have analysed it, I can rearrange it - trying scenes out in different orders and inserting missing scenes where they are needed, to build up my characters as required.

Here are a couple of views of my work in progress: 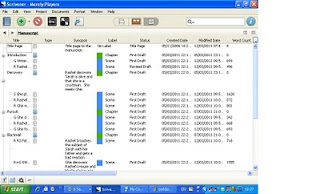 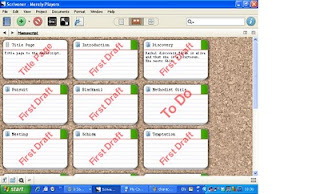 There are some great excel-based outlining tools around for free download from the internet, but Scrivener makes the process much more intuitive - and I love that it can be played with and altered as you go along.

Breaking down the work in this way makes it much less intimidating. When I see holes in my story, psychologically I'm not thinking about a full scale rewrite (yet) but zoning in on bite size pieces. For example, I realised that I needed to include two characters from my heroine's chapel so that the reader could benchmark the scale of her religious fervor and get a sense of where she is coming from. I was able to stand back from my text and take an overview of where in the novel Ernestina and Fortitude should be placed. Inserting the scenes was a doddle - I didn't feel like I was messing with a great big monolithic text but just having fun with a scene or two.

I'm now using Scrivener to map out the steps I need to take to get to the end of my novel. I feel more confident in mapping out the plot because I don't feel like it's a straightjacket - or something that will become redundant almost as soon as it's written. I'm strongly led by my characters and sometimes they just don't seem to want to do what I decided they should when I started writing. I need to reflect, adjust and reconsider the direction of the action. Scrivener's outlining tools enable me to do that quite effectively.

I'm hoping that this will be the one that I finally finish!

And Scrivener with Bugs and Black SpotsIt's not all joy though - this is a beta test version and there are bugs to be ironed out and features I would like to see. I would love to be able to colour code the folders and scenes in my binder, so that I can see at a glance which characters 'own' them. I would like to be able to view character notes and images at the same time, and look at them parallel to my text (I see in one of the case studies, the author does this by using two computer screens). I would like to see arrow commands at the foot of the binder - it would make shifting folders about more intuitive. Most importantly, I would like to see the formatting improved.

I imported my work in progress in rich text format (exported from word). When it imported it looked kind of as though the font had been made bold and the only way I could change that was by copying and pasting the style from other parts of the text. Scene by bloody scene. When I compose in Scrivener, it automatically imposes an indented paragraph, whereas the text I imported wasn't indented. I don't seem to be able to remove the indent in the new text, or to add the indent in the imported text - when I export to word for final formatting, I'm sure this will be sorted but in the mean time it's messy and a bit annoying. I would like the text throughout to be formatted the same way. I'm not sure whether this is a beta bug or a Scrivener thing or my own stupidity - it's something I'm going to look into.

The Final VerdictOverall, Scrivener gets a resounding thumbs up from me. I wish I had had it when writing other intimidatingly long and complex documents - it would have been invaluable when writing my Masters dissertation, for example (but in those days I was practically writing with a quill and ink pot, technology luddite that I was).

I would be interested to hear about other people's experiences of using writing software and how you think it might have helped - or hindered you. What do you use it for? What do you find helpful and unhelpful?

For those who are interested, I just came across a really interesting blog post on people publishing direct from Scrivener to Kindle (I'm guessing the Scrivener 2 Mac version) - my two new loves come together!
Posted by Meg McNulty

Great review! I use Scrivener, too, particularly for tracking the pacing or intensity of my work-in-progress. For instance, instead of watermarking the index cards with "first draft" "second draft" etc., I watermark them with "action" "exposition" "tension" etc. If I have too much of one or the other, I know I need to move things around a bit, or delete them altogether!

Hi Lia, I hadn't thought of using it that way - really interesting. Structure is one of the things I want to work on - that could really help. I have been using the index card to note the POV in different scenes, so I get an idea of how evenly spread that is, but this would make it even more useful. Thanks for sharing!

Great, thorough review. I just found Scrivener and I am absolutely blown away! I haven’t even touched the watermarks yet but those are both some great ideas. I can also understand where you were coming from with, as you put it being a “technology luddite”. My first manuscript was historical fiction (with a bit of fantasy thrown in), back then using a computer seemed anachronistic for the work I was aiming for, so I insisted on writing the entire first draft with a fountain pen. Now I look back and think: “Wow, I was dumb!”

I think I may still use Microsoft Word for doing line edits and short texts like blog posts, but anything other than that, I’ll be using Scrivener.

LOL that's brilliant! Though if you were keeping it real you would have crafted that fountain pen yourself out of a feather. I'm currently doing all my line edits in word, but for getting the whole structure etc together, I still think Scrivener is incredible!