Writing Lessons from the world of Sci Fi Movies

On Thursday night my husband and I treated ourselves to a sci fi/ fantasy movie fest. The films in question were this year's big blockbuster Inception and the lesser known but equally highly rated Moon (2009).

Both films were good and they are very different from each other: when is a fast-paced thriller with a large core cast; the other is a pared-down tension filled two-hander. Differences aside, however, Moon was the hands down winner in the superiority stakes. It's difficult to describe the plot of either without giving a string of great big spoilers so I refer anyone interested to IMDB for a plot synopsis. The subject of this post isn't a review of the films but a few points about what (in my humble opinion) makes Inception good and Moon great.

Three things to love about Moon
1. World-building. From the opening credits of Moon we are given to understand the importance of the lunar mining operation to the world. We discover that the problems of fossil fuels shortages, climate change and energy security have been resolved by the development of clean energy from Helium - and that Helium is mined on the moon by a large global corporation. This helps to set the context for the film's tightly woven plot. The lunar mining operation is keeping a whole planet alive and well. It has solved famine and floods. Millions are better off as a consequence of its work. This isn't a dystopian view; the Earth has been saved. The guys up on the moon are heroes - hurray for them! We immediately get a sense of timing (future), scale (global impact) and value (millions of lives). So when we get to the eerily isolated world of our solitary lunar miner we understand just how important his work is. He's saving the world - but at some personal cost.

The world-building in Moon isn't just contextual, as a frame for the plot and the action. It's atmospheric. As a movie, much of that is done by way of visuals and sound but it's done well. The protagonists' world is real to the viewer; we can suspend disbelief.

Interestingly, when looking at some blog comments about why people like the Sherilyn Kenyon Dark Hunter series, the vast majority of people said it was because her world-building was so good. They just fell in love with the whole Dark Hunter world she created. It's something Georgette Heyer is incomparably good at too (for a little more on that see here. Her books read like contemporary romances written by a regency lady. Romance novels are not all about the romance, it seems.

2. Universality. The other thing I like about Moon is that it explores universal questions - in this case through the narrow lens of a technological innovation (I'm trying my best to avoid plot spoilers here - hopefully not to the point of obscurity). This is something Sci Fi has always done really well. In this case Moon explores questions such as: does the good of the many outweigh the good of the few? What is humanity? Is food and energy security worth sacrificing the human rights of one man - or a handful of men? These are highly topical questions right now. We are living in a world where we have to take a view on important issues such as whether protection from terrorism is worth turning back the clock on civil liberties. A futuristic context enables these issues to be explored without party politics getting in the way.

3. Strong character development. The two protagonists in Moon both change in the course of the film. Initially they come across as very different people: one hot-tempered, scornful and aggressive; the other restrained, lonely and philosophical. In their case, this is particularly interesting because it suggests something about the way in which characters are formed by their experiences. Both change in an in the end, both are willing to sacrifice themselves for the other - a progression familiar from many a good romance novel. In the end, I think it's the strong characterisation which engrosses the viewed and makes this film work. I really care about what happens to the two protagonists; I'm deeply emotionally involved.

And then a look at Inception

Now compare and contrast with Inception, a hugely successful and inventive fantasy blockbuster. It's well acted, no doubt, and it's gripping. I was on the edge of my seat for most of the film and engrossed in the plot. It's as twisty and elaborate as any of the mazes which Ariadne (the film's female architect)designs. So why does it get a 7/10 from me and a mere 6/10 from my husband? Because it lacks the three ingredients which make Moon so great.

Firstly, world-building. We are given this concept: that people can invade the dreams of other people and extract their secrets, and further more that they can plant ideas in their subconscious. All well and good - it's an interesting idea. The setting seems contemporary (a contemporary urban fantasy?), but there aren't really many cues to tell us that. I was left wondering about that - is this a new skill developed in a future version of our world? Or is it an alternate version of the world we live in now?

In the film our hero, Cobb, is offered a job. In return for his redemption from a crime he didn't commit, he has to plant an idea in the mind of the heir to a major global energy company. And why should we care about this? Because the energy company will soon own most of the world's energy supply and become really, really powerful. That's it. The company in question could be an exemplar of idyllic working practice and corporate social responsibility for all we know. In fact, given that we are being told this by a shady business man who apparently possesses infinite power and wealth, it probably is. Do we want this mission to prosper because it's important that it should? Or should we care because it means so much to Cobb? Given the sketchiness of the mission we have to assume that the latter is true.

Which brings us on to character development. In the course of the film we learn that Cobb is haunted by guilt; he needs to make peace with his subconscious. The interesting twist to this is that if he doesn't, his subconscious poses a major threat to the mission and indeed to his team-mates. So do we care? Well, a bit. It would be nice for him to hug his kids, but the whole man-tortured-by-subconscious-and-needs-to-get-his-kids-back vibe is neglected in favour of driving the action forward. And there is a lot of action; lots of cool fight scenes in a cornucopia of different settings; lots of slick costumes and clever sequencing. But in the end does Cobb change? Does he learn something about himself? I don't really think so. He comes to terms with his guilt, certainly, but his redemptive act (saving the shady business man who is going to sort out that icky murder charge for him) is glossed over in a matter of seconds. It feels somehow unsatisfactory - an opportunity missed.

Lastly, does the film take the opportunity to explore the universal questions it touches upon? It does have a lot of opportunity for to probe some interesting subject. Like Moon, Inception messes with one man's mind in order to achieve an objective of global significance (putting aside the fact we don't really care about that objective). It also touches upon the ethical dimension of tampering with another person's thoughts and beliefs. We see the tragic result of one case of idea-planting (inception) gone awry in the case of Cobb's wife. Her story is intertwined with the main plot, shaping the actions of the characters and especially of Cobb. 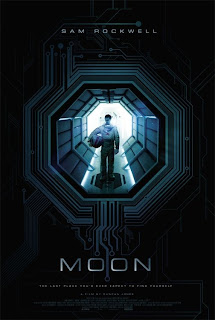 I think the problem with Inception is that all the emotion is bound up in the relationship between Cobb, his wife and his own subconscious. Maybe that's deliberate; it enables the viewer to live inside his head - a place where the 'real' world is less important than the world of his dream. Unfortunately it also disengages the viewer from any emotional resonance the main story line might have. It's possible that the actions of the team in probing the Energy Heir's head will have tragic consequences. It may be that those tragic consequences are worth it to Save the World from Global Dominance. The problem is, as we don't know if it's important for the world to be saved from this particular global dominance (and we only have the word of the shady businessman to prove it exists at all) and little time has been spent on encouraging us to grow emotionally attached to the Energy Heir - we just don't care that much.

It's nice to see Cobb reunited with his kids, but I'm not convinced he's changed that much. Likely, he'll be roaming off in someone else's subconscious all too soon. And as for the secondary characters - well, they're just plot devices really, there to move things along. Or maybe they're projections of Cobb's subconscious - who knows? Who cares? In the end Inception is exciting, twisty and clever - but a bit emotionally empty.

This wasn't meant to turn into a film review (although it has). The point I was actually trying to make was about writing. 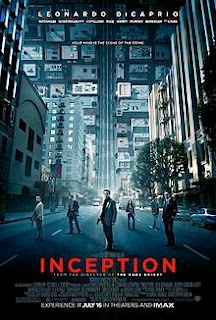 To my mind, Inception and Moon represent two different theories on how a book (or in this case a film) should be put together: plot versus character. I have read a fair bit of advice on this aspect of writing and I know that author's approach this in lots of different ways. Some people need a prescriptive roadmap for where their plot will go; some just start with a situation and a pair of characters and let them run.

Inception is all about plot: it's fast-paced, gripping and intellectually engaging. Will it make you wonder? Maybe. Will it bring a tear to your eye? Definitely not.
Moon is well plotted too, if slower paced. But in its case character reigns supreme. You really care about the two protagonists. Damn it, you're rooting for them. It's as intellectually challenging as Inception, but ultimately, you will remember it with your heart and not your head.

Which will I watch again? No question: Moon.

And the Lessons are:

So here are the lessons I'm taking away from my Sci Fi Fest (in priority order):

1. Stick with the protagonists; fall in love with them and let them blossom. Let the action challenge them and their characters shape the action. Let them change and let them grow. Let them feed off each other; it will make your work live and breathe.

2. Make your world real. Set it in a context which makes sense and provides touchstones for your reader to build an imaginary kingdom in their mind. If this is poorly done, it's just irksome. Your people will be floating in time and space and we won't have a cultural yardstick of what we should expect (past, present or future) to judge them by.

3. Universality. There must be some universality of human experience in the fabric of your story. This isn't the preserve of Science Fiction, though its something Science Fiction does particularly well. It doesn't have to be on the level of asking big questions; maybe it's on an emotional level. How far will someone go to protect the person they love? Is it ever right to.... whatever. That will add interest to your story.