I'm in the middle of a short story in which the heroine steps inside her long lost sister's home. The setting is important; it provides visual clues to the sister's affluence and lifestyle and also helps to date the story.

As I have mentioned before, the latter is a trick much practiced by Georgette Heyer. She allows the events and settings of her novels to date the story without hitting us over the head with the calendar. Activities and settings such as a visit to the Elgin Marbles (Cotillion), riding on a pedestrian curricle (Frederica) and the Duchess of Richmond's Ball before the Battle of Waterloo (An Infamous Army) help to plant the story in a clear time and space. It subtly assists us in populating our imaginative world.

I would like to be able to say that this is why I spend time on (for example) working out when women started wearing bare toes in their sandals or donning pince-nez, but the sad fact is I am just an irredeemable geek where social history is concerned and I find details like this absolutely fascinating. Hence I have just spent too long a portion of my life trying to find out the answers to the followed questions:

1. When was gas lighting was first used in domestic homes?

2. Would the hall walls in a relatively affluent Regency household be hung with paper, silk or painted?

3. Where would a fashionable courtesan live in Regency London? 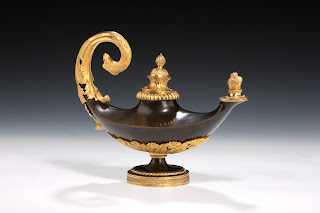 Thanks to the marvelous power of the wondrous world wide web I have managed to discover that gas lighting was used in domestic homes from around the 1860s (too late for my story). Throughout the Regency period candle-light and to a certain extent, oil lamps (such as the Argand oil lamp), were still the most common light sources in the domestic home. The main types of candles were tallow (made from animal fat and therefore cheap, smelly and smoky); spermaceti (made from whale oil and less prone to softening in hot weather); and beeswax. Candles were both portable (candlesticks and candelabra) and fixed (sconces and chandeliers). In more affluent homes, the candelabra was often displayed in front of a mirror on the mantelpiece for enhanced light. My heroine's affluent sister therefore might have a chandelier in the hall and a candelabra on the mantelpiece. There are some excellent examples of these types of home furnishings in the Victoria and Album Museum, such as this candelabrum from 1810 which was commissioned by the Prince Regent which was part of a candelabra intended for the conservatory at Carlton House. 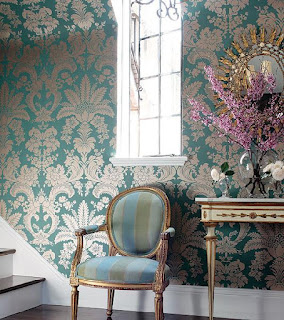 Her walls would very likely be hung with wallpaper, or possibly damask, rather than painted. Wallpaper came into use in the early Georgian period when the fashion for all things classical was at its peak. Although patents on wallpaper had been taken out under the reign of Charles II, the pieces were generally quite small and therefore not particularly useful. In 1712 a tax on wallpaper was introduced which added a tax of 1d per square yard on painted, patterned or printed wallpaper. By 1809 the tax rose to 1s (equivalent of £2.84 in 2010 according to the highly useful Measuring Worth website). People got round the tax by buying plain wallpaper and having it hand stenciled. To demonstrate her fashionable and affluent status, my heroine's sister would probably have the most popular and expensive wallpaper design, such as stripes, Rococo designs or flock patter which imitated velvet. For an example of some expensive painted wallpaper in the Chinese style see this sample on the Victoria and Albert Museum website, created c.1810 - 1830.

And when would my heroine's sister (who by now you may have gathered is an affluent courtesan) have lived? According to Dan Cruickshank she would most likely have dwelt in on of the elegant villas which had sprung up in the Georgian building boom in Soho or Marylebone.

A word of caution
I am really enjoyed reading my way through Stephen King's On Writing at the moment and one of the points Mr King makes is that when writing, you should just write. If you don't know the name for something or (my example) when gas lighting was introduced, put a place holder in and then go back to it when the story is done. Just get the damn story down. It's good advice. But those titbits of knowledge are just sooooo tempting!

References
For a guide to lighting in the Victorian Home (which also covers aspects of Georgian lighting), see this wonderfully researched article by Jonathan Taylor.

For the impact of prostitution on building in Georgian London, see Dan Cruikshank's The Secret History of Georgian London: How the Wages of Sin Shaped the Capital (Random House). Some of the points Cruikshank makes are summarised in Harlot's Progress, an article in the Economist which reviews Cruikshank's book.
Posted by Meg McNulty