A Regency Frost or How to Celebrate the Snow

"Edinburgh - The frost is still intense, and the fall of snow has been so deep in the Southern parts of the country, that the different mails have arrived with difficulty, and much behind their usual time."
- The Annual Register, or A View of History, Politics and Literature for the Year 1814 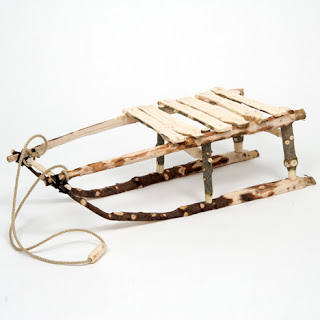 Today I really found myself longing for a sledge. In early November, the shelves in every hardware store were teeming with them. By close of play on the first day of snow, they were bare. I was too slow. For the last fortnight, I have paid the price for my lack of action as I have been carrying, cajoling or dragging (in a buggy) my recalcitrant three year old through the icy wastes of snow and ice which were once called pavements in Edinburgh. We are snow bound and Edinburgh has transformed itself into Narnia (though strictly speaking, I haven't yet heard any animals speak).

The weather got me to wondering how our 19th century ancestors coped with the big freezes of their generations? Living in houses without central heating and adorning themselves in the prevailing fashion for thin muslin dresses, did they not shiver themselves to death? What did they do to entertain themselves?

Without a doubt there were big freezes. The period between the 16th and 19th centuries is commonly known as 'The Little Ice Age'. The severe winters and wet summers which occurred frequently throughout this period had a dramatic impact on agriculture, social unrest and health in certain parts of Europe and North America.


“Caesar was ne’er so much your enemy as that same ague which hath made you lean”
- Shakespeare's Julius Caesar, 2.2.24-25


One of the diseases commonly referred to in historical and fictional texts from the period is ague: fevers and chills which correspond to the symptoms of malaria (odd to think of a tropical disease spreading in a cold climate). People also suffered from malnutrition and hypothermia.

But of course it wasn't all bad. Human beings are resourceful and the merchants of London more so than most. The Little Ice Age made possible one of the most evocative entertainments of the 19th Century: The Last Frost Fair of 1813-1814. 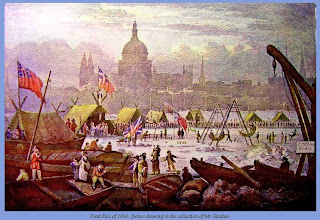 In 1813-14 the Thames froze over. The February entry for the Annual Register of 1814 describes the river's condition as follows:

(Feb 1st) "The Thames, between Blackfriars and London Bridges, continued to present the novel scene of persons moving on the ice in all directions and in greatly increased numbers..... we observed several booths erected on it [the ice] for the sale of small wares; but the publicans and spirit dealers were most in receipt of custom."


It goes on to write:


(Feb 3rd) "The number of adventurers increased. Swings, book-stalls, dancing in a barge, suttling-booths, playing at skittles, and almost every appendage of a fair on land appeared on the Thames. Thousands flocked to the spectacle. The ice presented a most picturesque appearance. The view of St. Paul's and of the city, with the white foreground, had a very singular effect ; in many parts mountains of ice upheaved, resembled the rude interior of a stone quarry."


(Feb 4th) "Each day brought a fresh accession of pedlars to sell their wares, and the greatest rubbish of all sorts was raked up and sold at double and treble the original cost. The watermen profited exceedingly, for each person paid a toll of twopence or threepence before he was admitted to the fair; and something also was expected for permission to return."


Other sources suggest that the enterprising watermen broke up the ice, forcing people into paying the entrepreneurial men of the Thames into ferrying them back to shore after their wintry entertainments.

There is a long a glorious history of Frost Fairs on the Thames. The first recorded frost fair was in 1564 and featured Londoners dancing on the ice and archery being practiced. Subsequent fairs added wild beast shows, commemorative prints and inspired verses and etchings in their honour. One verse printed at the Frost Fair of 1684 is as follows (extract):


"Behold the Wonder of this present Age,
A Famous RIVER now become a Stage.
Question not what I now declare to you,
The Thames is now both Fair and Market too.
And many Thousands daily do resort
There to behold the Pastime and the Sport."

- Printed by M.Haly, and J.Millet, and sold by Robert Waltor, at the Globe on the North-side of St.Pauls-Church, near that end towards Ludgate. 1684. The full verse can be viewed online at the Where Thames Smooth Waters Glide website entry on Frost Fairs.


The Frost Fair was made possible by the old (medieval) London Bridge. The medieval bridge had 19 small arches, and the narrowness of the arches meant that it acted as a partial barrage over the Thames, restricting water flow and thereby making the river more susceptible to freezing over in winter because of the slower currents. The construction of the new London Bridge in 1831 increased the flow of the river and diminished the likelihood of freezing and thus, of Frost Fairs.

The most recent mention of the Frost Fair I have come across is in the dashing entrance of Ben, Lord Hawksmoor in Nicola Cornick's thoroughly enjoyable Lord of Scandal. Well worth a look!

Sadly, the era of the true Thames Frost Fairs is therefore past - destroyed along with the old London Bridge long before Health and Safety legislation could make it an impossibility. Of course, that doesn't mean we can't find ways to entertain ourselves.

The severe winters of the Little Ice Age are also credited with the flowering of certain strains of literature. In 1816, known as The Year Without a Summer; The Poverty Year; Year There Was No Summer; and Eighteen Hundred and Froze to Death, severe summer climate abnormalities destroyed crops in Northern Europe, the Northeastern United States and eastern Canada. Many Europeans spent the summer huddled around the hearth entertaining themselves as best they could.


We will each write a ghost story.
- Lord Byron


In 1816, at Byron's rented house by Lake Geneva (the Villa Diodati), Byron and his physician Dr Polidori met with Mary Wollstonecraft Godwin (later Mary Shelley) and Percy Bysshe Shelley. The literary neighbours read aloud from Tales of the Dead an English Anthology of horror. Inspired, they accepted Byron's challenge and embarked on their own stories. The two most successful have become hugely influential - arguably spawning genres in their own right. Mary Shelley's Frankenstein and Dr Polidori's The Vampyre broke new ground for horror writing in the English language and sowed the seeds for much supernatural fiction today.

I may not have a sledge or a Frost Fair but I do have a fireplace and an imagination. Now repeat after me, We will each write a ghost story....
Posted by Meg McNulty