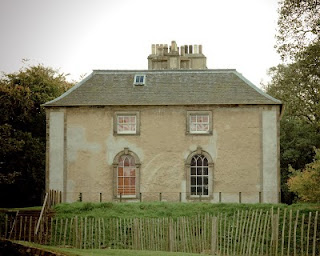 You would imagine, having a passionate interest in pre-20th century lifestyle and customs that I might have noticed a Palladian Mansion sitting on my doorstep. Unbelievably it has taken me three years to do so and even then, I stumbled across it by accident, much like Lucy stepping through the wardrobe into Narnia.

This happy accident occurred a couple of weeks ago, when we were on a family walk along Brunstane Burn and decided for a change to walk up into the fields beyond. It was then that the hidden treasures of my local neighbourhood started presenting themselves to me. The first thing we came across was the "Ladies Walk", which stretches across a field at the back. This promenade is apparently unique in Scotland. It's a raised, brick walkway which once stretched from the main house across pastureland to a viewpoint of the Firth of Forth. This image by Derek Harper shows the west side of the walkway. 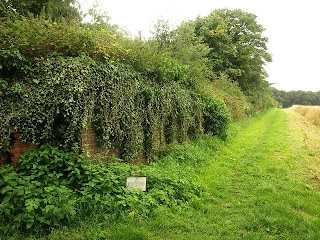 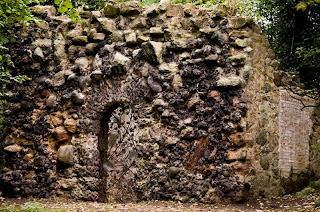 Intrigued, we explored further, walking the holly-studded woodland which circled the field. The next thing we saw was the ruins of a shell grotto. This is the thing that really caught my imagination, providing a direct physical link back the 18th Century. Grottos are at the epicentre of the 18th Century Rococo movement - the very word Rococo was created from two French nouns related grottos: rocaille, the rockwork found in caves and grottoes, and coquillage, the shellwork which adorned them.

Naomi Miller describes the grotto as the realm of endless contradictions, a place that, like the rococo style itself, is defined by an inherent lack of definition. The grotto provides shelter and protection, yet evokes mystery and fear. It is a site of contemplation and poetic inspiration, but also the arena of intellectual chaos; a sacred underground temple, but also the location of Bacchic orgies. Miller [Naomi Miller, Heavenly Caves: Reflections on the Garden Grotto] suggests that ultimately the grotto is best understood as “a metaphor of the cosmos,” something that can be experienced but never fully understood. The grotto and, by extension, the rococo represent places where Apollonian ideas about morality confront primal Dionysian desires and where the rational, classical mind comes unraveled. 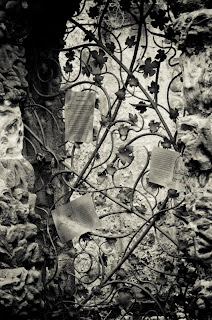 The timing of this particular discovery was about as perfect as it could be. The main character in my current story, Perdita Moon, is a very proper lady living in the London of 1825 and her secret love of the art and architecture which grew from the Rococo period is one of the things which hints at her wilder blood.

One peep around the next corner and we saw the facade of the house which is depicted at the top right of this post. I have since discovered that this house, Newhailes, is a National Trust for Scotland property and the former of home of the Dalrymple family. There is a good article about the house on the Undiscovered Scotland website. You can be sure that come April when the house reopens I will be having a good look around it.

Time pressing we walked back along the burn which ran through the Dalrymple's 18th Century Rococo water garden. The final site we came to was the remains of the Tea House - a neo-classical summer house overlooking the burn.

I am now looking forward to many enjoyable afternoons rambling through the estate dreaming up plot lines and characters to populate the ghostly buildings all around me. What a wonderful find!
Posted by Meg McNulty