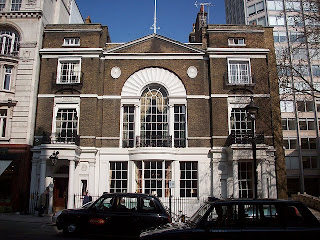 This week I found myself forced to walk down St James' Street in full view of the clubs and moreover with ankles on display. The horror! My chances of receiving vouchers for Almack's are well and truly shot...

Okay, okay, so St James Street these days is one of Mayfair's main thoroughfares and full of perfectly respectable (and indeed perfectly disreputable) people of both sexes wandering about their daily business. I, as it happens, had occasion to meet with someone at the Carlton Club which is located at number 69 St James Street.

The Carlton Club itself most definitely does not excite me - it was after all, founded in 1832 and thus by my lights is a Johnny Come Lately on the London scene. No, what excited me about number 69 St James Street is that it was originally the site of White's Chocolate House. There is a marvellous potted history of the site on the wonderfully detailed British History website. 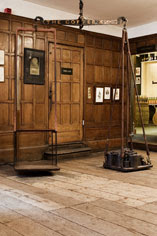 I hid my frisson of excitement from the other participants in the meeting, until it was revealed that St James St also houses Berry Bros & Rudd, a wine merchant which has operated from number 3 St James St since 1698. By 1765, at the 'Sign of the Coffee Mill', Berrys not only supplied the fashionable 'Coffee Houses' (later to become Clubs such as Boodles and Whites) but also began weighing customers on giant coffee scales. The choice piece of information I discovered on Monday was that not only are the scales still on display in the shop, but so is the weighing book - featuring the weigh ins for people such as Lord Byron, William Pitt and (so I have been told) Beau Brummell. This clearly requires further investigation! 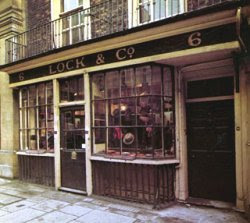 A quick stroll around Mayfair is a trip back in time to Regency London. Boodles, Brooks and Whites still line St James St, you can still purchase a hat in Locks and (if stupendously wealthy) hire yourself a townhouse on Curzon St, Half Moon St or Jermyn St, shop in the Burlington Arcade and get married (by special license, naturally) in St George's in Hanover Square(the only church to be seen in).

Sadly, Almack's is no more: on King Street an office block stands on its site, but a brass plaque commemorates its glory days. There may no longer be a herd of cows in Green Park, but it is certainly possible to trot down Rotten Row in Hyde Park to see and be seen.

Having made these tantalising discoveries, a full walking tour is clearly called for. I am now planning one for the spring in the company of my fair sisters, perhaps to coincide with a viewing of the Elgin Marbles (no, they've still not made it back to Greece) or a quick trip to the Victoria & Albert Museum (wrong period, I know) to sigh over beautiful costumes from the 1800s. The question is, whether to delicately partake of an ice, or to restore oneself with a hot chocolate. Afternoon tea, it has been decided, was brought into fashion in the mid-1800s and thus too late to form a part of our Regency day. Sigh.

I look forward to bringing some images of Georgette Heyer's Regency London to a blog near you!
Posted by Meg McNulty