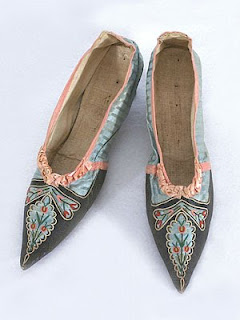 I remember reading Georgette Heyer's Infamous Army and being fascinated by the description of the charismatic Bab Childe's feet, or rather toe nails. She had painted them gold - an act seen as evidence of her wild nature and provocative ways.

I was researching some details for a short story where my respectable 18th century heroine wants to appear scandalous in order to frighten off a highly conventional aristocratic suitor. That entails a major makeover. Ever since the transformation of Plain Jane Superbrain to dashing pin up girl ("Neighbours", circa 1986) I have loved a good makeover. My heroine Emma's outfit is key to her assumed role as a spendthrift and scandalous seductress.

I decided that Emma should place herself at the vanguard of fashion, wearing diaphanous grecian style robes whilst her contemporaries were still in their rich brocades and silks. That places her in 1794, a good year ahead of when the "short-waisted" dresses (empire line to us) became commonplace. 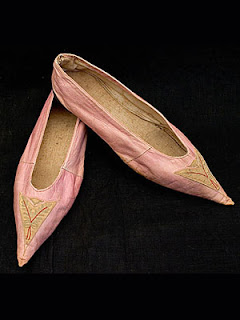 My problem was her footwear. I wanted to put in sandals, but research into footwear in the period suggested that in the 1790s, the high heeled brocade shoes prevalent throughout the 18th century were giving way to the ballet style pumps familiar to us from Jane Austen (and of course Georgette Heyer).

It took a ridiculous amount of research on this apparently small detail to turn up an answer on a fantastic website, helpfully called A History of Footwear. The author writes:

Sandals begin to be worn in the 1790’s, but the open cut outs are frequently underlain with embroidered silk to hide the naked foot. At the very end of the period, in 1813, Grecian sandals appear, leaving the foot almost bare. These were low cut pumps with ribbons to cross and tie around the ankle. These were so simple to make that wealthy women took to making their own as a hobby.

Excellent! So for Emma to wear sandals without embroidered silk over her toes, was to make her very scandalous indeed. Perfect - footwear all sorted. It just remains to be seen what colour those provocative toenails might be. 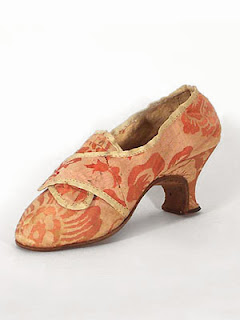 For a couple of excellent articles on historical footwear check out: A History of Footwear and Miss Shoes' wonderful blog post on 18th century footwear. .

Some beautiful images of actual 18th and 19th century costumes can be found (for sale) at Vintage Textile, the source of the images in this post.
Posted by Meg McNulty