Personality of the month: Teresa Cornelys 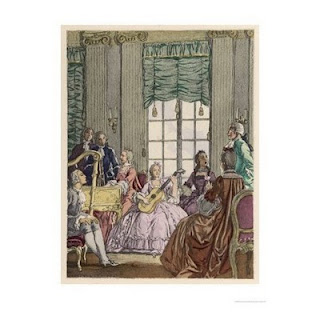 My personality of the month Mrs Teresa Cornelys (1723 - 1797) had a tendency to attract epithets. Variously know as "Empress of the Regions of Taste", "Slip-shod Empress of Velvet-Clad Venery," "Folly's Sun", "the Circe of Soho" and "the Eastern Sultana", she was instrumental in transforming the social scene of 18th Century London.

Teresa began her career as a viennese opera singer, actress, courtesan and Casanova's childhood friend and lover. By the age of 35 she living in the Netherlands, a destitute single mother dogged by creditors. Five years later Teresa had reinvented herself as the toast of London - and the highest-earning business-woman in Britain.

Before Ronnie Scott's or Chinawhite's were even a twinkle in a night club owner's eye, people thronged the streets of Soho to clap eyes on the glittering guests at Teresa Cornelys' Carlisle House concerts and masquerades. Riding high at the nexus of fashion, Teresa revolutionised London's night life, filling the dead post-opera hours with glamour, invention and celebrity.

She helped to shape the growing cult of celebrity, managing her own public image through a symbiotic and mutually beneficial relationship with the burgeoning glut of newspapers which dominated the later half of the 18th century.

She achieved power and prominence both as a cultural icon and as a business woman without the auspices of a male business partner. In an age when women didn't have the right to vote and were the property of their husbands, Teresa Cornelys managed to be both a single mother and a commercial power. 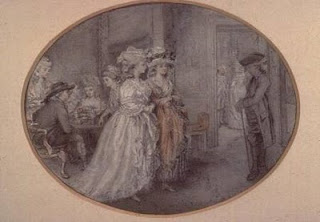 Teresa had a fatal flaw - an inability to stay out of debt. Throughout her life she changed names, nationalities and protectors to escape the mountains of debt which she left scattered throughout Europe. Despite these tactics, by 1772 she was bankrupt.

In the years to follow Teresa tried to rebuild her success but she was unable to achieve a truly successful comeback and by 1791 Carlisle House had been demolished. Teresa's last ditch attempt to restore her fortunes was to open a tea-room selling asses milk.

It was not a success.

Teresa Cornelys died at the age of 74 imprisoned, steeped in debt and rejected by her family. Her legacy was to shape London's social scene and the pattern of society for the next two hundred years.

I love the parallels between Teresa Cornelys' life and career, and our modern cult of celebrity. The sacrifices she made, the risks she took, the things she did to survive (including leaving her son with her creditors) and the highs and lows of her fame and fortune read like a tabloid fantasy: Katie Price eat your heart out.

Love her or loathe her, Teresa is a fantastic inspiration for romantic heroines to come.

I'm indebted to Judith Summers's pacy biography for her whistlestop tour of Soho's Empress of Pleasure. 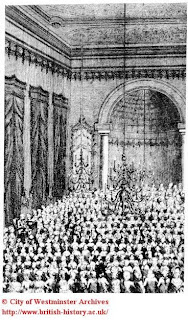 People interested in Teresa Cornelys and her impact on Georgian social structures might also find Gillian Russell's Women Sociability and Theatre in Georgian London an interesting read. For a history of the events at Carlisle House, British History Online has some great information and for a history of Casanova in Soho, see Judith Summer's article for the Museum of Soho.
Posted by Meg McNulty