The Benefits of Dirty Linen 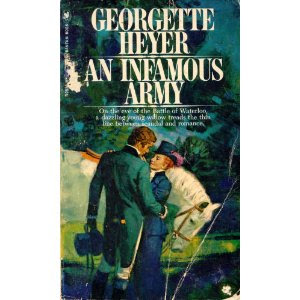 I was just reading Denny S Bryce's comment on this Edittorrent post and it got me thinking about heroes and heroines who stand out to me, and why.

There are tons of Georgette Heyer books that I love whose heroes are very far from being bad lads (Cotillion, sigh), but the characters who sprang to mind after reading Alicia and Denny's post were the devilish Alastairs, who are so bad they are utterly magical. Heyer must have liked them too: she wrote three novels about them (or four, if The Black Moth is included). I was reminded of the Alastairs when reading this comment from Denny:

Constructing good from evil and debating where one leaves off and the other begins was masterful (IMHO). My favorite episode, Amends, Season 3 BtVS, tackles this head on. Whedon even made the remark that the episode included his 'best'/favorite line he ever wrote. "It's not the demon in me that needs killing, Buffy. It's the man."

Denny (and Alicia) was discussing the use of juxtaposition and contrast in drama, but it sparked a thought in my head about the most interesting tension and characterisation being where the shades of grey lie - where characters have dubious motivation, or struggle with their demons. Throughout the Alastair novels, Avon remains a satanic figure but also (it transpires) a person capable of self sacrifice and goodness - solely where his beloved is concerned. There isn't a dramatic reformation. He doesn't see the error of his ways. He remains inpenetrable, opaque and ominiscient. In Devil's Cub, the sequel to These Old Shades he isn't best mates with his son Dominic - there are no big cuddles, or tears of pride. He is respected, distant and even feared.

Heyer resists wrapping everything up in clean linen or tying up all the loose ends in a neat and tidy manner. I think that is why the Alastair novels remain so exciting and so tense, even into their third generation (Babs Childe in An Infamous Army).

That, for me, is the key reason that the Alastair family series succeeds where series by other authors who have followed in Heyer's wake don't. Naming no names, lots of series fall into the reforming-to-the-point-of-blandness trap. The problem is, by the time the whole family are married off, we're introduced to the full clan and living happily ever after with tons of beautiful children, oodles of money and daily multiple orgasms. It's like being thrown into a room full of smug marrieds. It's like the episodes of Superman after Clark and Lois got together. It's just... gone.

The overall impact is dilution. You know, before you even pick up another novel in a series like that, not only the ending (knowing that there will be a happy ending is one of the joys of romance novels, right?) - but everything about what the future holds for this particular couple. Where's the drama in that? Conflict, obstacle and resolution are exciting. Smug marrieds are not.

So I suppose here's the plea... don't lose the shades of grey, they are what make your characters - and their relationships - vibrant and exciting.

Pertinent to this topic is this post on the fabulous and funny Smart Bitches Trashy Novels blog. An article every author should read!
Posted by Meg McNulty