"Of all deviations from the paths of duty, there are none that so forcibly impeach their pretensions to the character of rational beings as the inordinate use of spiritous liquors"
- Thomas Trotter, MD, 'Essay: Medical, Philosophical and Chemical on Drunkeness and its Effect on the Human Body. 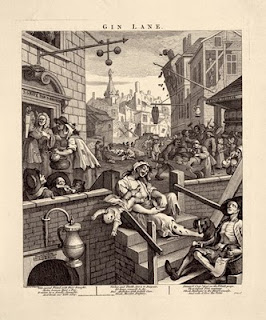 What did a three-bottle a day man do when his drinking got out of control? Did he turn to god? Did he check himself into the regency version of the Priory? Did he die of wet brain and dropsy, or did he recover?

In 1804, Dr Thomas Trotter released the second edition of his Essay, a ground-breaking treatise which for the first time characterised excessive alcohol consumption as medical condition. In the same period, across the pond in the (newly forming) US, Benjamin Rush started talking about alcoholism as an addiction.

One historical note for the Scotiaphiles or people who like a weird coincidence - both these gentlemen had studied in Edinburgh, which at that time was the burning heart of the enlightenment. Rush went on to be a Founding Father of the USA, Trotter became a leading medical reformer in the navy and an ardent critic of the slave trade.

I stumbled across Trotter and Rush when asking myself the questions I listed at the start of this blog. In a period which followed hot on the heels of the 'Gin-Craze' of the 18th century, at a time when being a 'three-bottle' man was seen as a badge of masculinity how was alcoholism managed? Was there any prospect of recovery? Was it viewed as a major problem?

With regard to human behaviour, I'm a big fan of Ecclesiastes "What has been is what will be, and what has been done is what will be done; there is nothing new under the sun". I get excited about historical parallels with contemporary culture, which is one reason I was intrigued to stumble across Dr Trotter's thesis. His theories, at the time, were ground-breaking and would still be relevant to the current debate about alcohol, social justice and addiction generally. I even found evidence of research as late as 1999, assessing the accuracy some of Dr Trotter's theories about alcoholism.

In the last year, I have read two Georgian/Regency novels which touched upon addiction issues (by Eloisa James' The Taming of the Duke and Jo Beverley's To Rescue a Rogue) and I'm interested in addiction as a theme in historical romance. My exploration of Dr Trotter has left me bubbling with ideas - two embryonic characters a gradually taking shape, a woman of science and bad baron in need of sobriety. 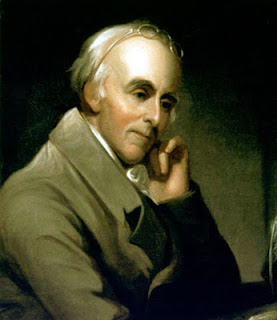 But it is to Benjamin Rush I owe my title.... Ardent Spirits!
Posted by Meg McNulty